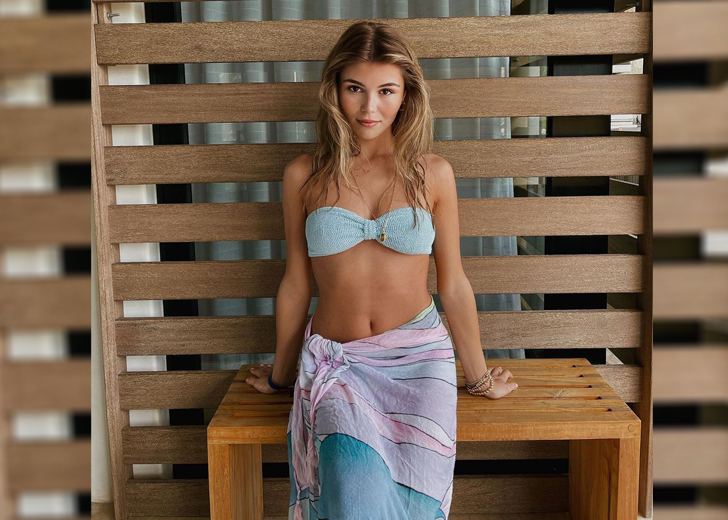 Speaking of her self-titled YouTube channel, it has more than 1.83 million subscribers and over 196 million collective views. She usually uploads videos on different topics such as vlogs, makeup, fashion, lifestyle, challenges, and so on.

Jade is currently in the spotlight after appearing/competing in the 30th season of the American dance competition television series, Dancing with the Stars (DWTS). In it, she was accompanied by the Ukrainian professional dancer, Valentin Chmerkovskiy.

The YouTuber celebrates her birthday on the 28th of September every year. She is currently 21-year-old but will be celebrating her 22nd birthday less than a week later, on September 28, of this year.

Born as Olivia Jade Giannulli, she hails from the suburbs of Los Angeles, California. She was born in the year 1999. As per her date of birth, her zodiac sign is Libra.

Jade was born in fame as the daughter of American actress, Lori Loughlin, and American fashion designer, Mossimo Giannulli. Her parents shared the wedding vows in 1997.

Other than her parents, she has two more family members in her family, an older sister named  Isabella Rose Giannulli and a half-brother named Gianni Giannulli. Jade’s half-brother is her father’s son from his previous relationship.

Before marrying her biological father, Jade’s mother was in a marital relationship with an investment banker named Michael R. Burns. They married in 1989 and got divorced seven years later, in 1996.

While her biological parents have earned fame for their work through their respective professions, they have also caught some negative attention. The negative attention came after Lori and Mossimo were arrested as a part of the 2019 college admissions bribery scandal.

This led to Lori losing many acting jobs and being dropped out of several shows. Additionally, Jade also suffered some losses as she was removed from some advertisement deals.

Later, Jade’s parents pleaded guilty to some charges. While her mother was sent to two months in prison, her father was sentenced to five months.

The present relationship status of Jade is unknown. The famed YouTuber has not given any clue on whom she might be dating now. It is possible that she might be relishing her singlehood days.

However, her relationship status was not always single as she was dating someone in the past. Previously, Jade was in a relationship with the American singer-songwriter Jackson Guthy.

The two sparked dating rumors in January of 2019 when Jade began posting pictures alongside him. Their togetherness was seemingly confirmed in the next month when she began featuring him more frequently on her Instagram handle as well as YouTube channel.

When the scandal involving her parents was out, she lived together with Guthy in his home for some time. However, as the backlash over the scandal continued, the two decided to break up in May 2019.

Although separated, the two remained friends. Later, it seemed that they were together again. In August 2019, the talks of their reunion were confirmed by US Magazine. As time passed, their bond looked strong.

On 2020’s Valentine’s Day, both of them wished each other and even shared tributes via their Instagram handles. Over the months, their togetherness was seen more and more in public and it seemed like they would remain together this time around.

Nonetheless, the two were not meant to be together forever. This year, in August, Jade confirmed that she and the singer had split again. The confirmation came during her Instagram Q&A session when a fan asked “R u single?” to which Jade replied, “I am indeed.”

Following that, there hasn’t been much talk around Jade’s love life and her having a new boyfriend.

Before her relationship with Guthy, she was dating a man named Tyler Greenwald. The two dated for a long time as it is reported that they were together from 2016 to 2018. After her break up with Greenwald, she was in a relationship with Nick Penske. However, they split after some time.

Posted on September 29, 2021July 28, 2022
Jack Manifold, known online as JackManifoldTV, is a rising English YouTuber and Twitch streamer who came into the limelight after becoming a member of...
Read More