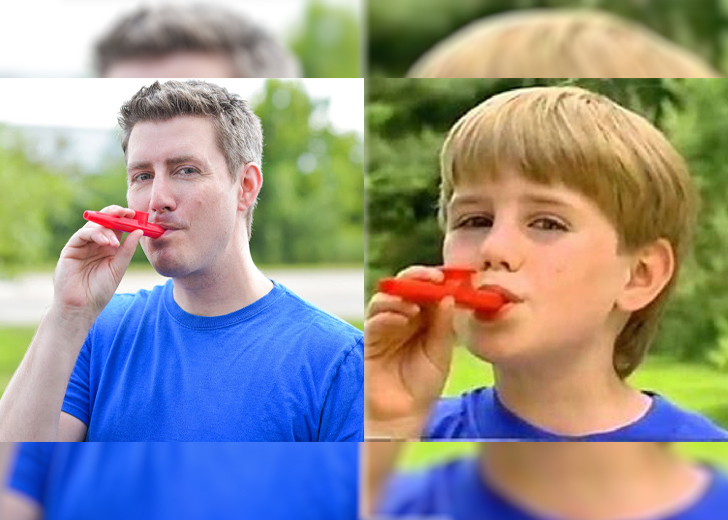 Brett Ambler is an internet personality and an actor who is mostly known by the name ‘The Kazoo Kid.’ He got the limelight in 2016 after his funny advertisement, You On Kazoo!, got viral as a part of memes, almost 27 years after the advertisement was first aired.

Since the video got viral, Ambler has been relishing the limelight and has since been known as The Kazoo Kid.

How Old Is the Kazoo Kid Today?

Brett Ambler, aka The Kazoo Kid, was born in 1984, in the suburbs of Redding, Connecticut. He celebrates his birthday on the 8th of December every year.

Taking that into consideration, he is 36 years old as of now. This year, he will be celebrating his 37th birthday.

His birth name is Brett Walsh Ambler. As per his date of birth, his zodiac sign is Sagittarius. Other than that, not much is known about his early life and parents. He has kept those details up to himself only.

However, his Instagram gallery gives us the idea that he has siblings, including one sister and two brothers.

The Kazoo Kid’s Net Worth

Ambler has gained quite a success after the Kazoo advertisement got viral, thus making people wonder how much does he earn and how much is his net worth.

Before getting into the limelight, The Kazoo Kid had done voice acting work in some short videos and even appeared in some stage productions. He is also an actor as well as a musician.

Later, he went on to upload videos on his self-titled YouTube channel, which currently has over 7.13 thousand subscribers.

His current full-time profession is unknown though. Nonetheless, reports suggest that The Kazoo Kid has an estimated net worth of around $500,000.

Is The Kazoo Kid Married?

The Kazoo Kid we saw as a part of the viral memes is no more a kid as he has fully grown up now. So, is he in a relationship and has a girlfriend or is he married to a wife?

Well, yes! Ambler is currently a married man who has a blissful marital life with his girlfriend turned wife named Amanda Ambler.

The now-married couple were dating for a long time before sharing the wedding vows, however, their dating relationship timeline is unknown.

On September 17, 2018, Brett shared a picture to announce the news that he and Amanda got engaged. He had shared a picture of his hands holding Amanda’s hands, where the big engagement ring was seen.

His next Instagram post was on March 10, 2019, which also happens to be the post where he announced that he got married to the love of his life. He had shared a picture of his hands, where a wedding ring was seen on his ring finger. He captioned the post writing, “So married!”

Since their marriage, the couple has been relishing their life as husband and wife. As The Kazoo Kid prefers to keep things private, he hasn’t shared much on his marital life on social media.

The Kazoo Kid: Then and Now

The main thing that made Ambler famous as The Kazoo Kid was the 1989 advertisement titled You On Kazoo! He was hired to play the commercial to promote a toy instrument called Kazoo, which was the first of its kind at that time.

The TV commercial aired at that time and everything went normal. It wasn’t until 2011 that the ad resurfaced on the internet after YouTuber Jim VanBlarium used it. A few years later, a better-refurbished version of the advertisement was uploaded by the Dead VCR channel.

The video got an amazing response as it gained more than half a million views. Later, it reached Reddit and other platforms such as SoundCloud and Facebook. By 2016, the video took the internet by storm as audio remixes and memes.

After the video got viral, people began looking for the kid in the advertisement. Finally, it was discovered that the Kazoo Kid was no longer a kid, but has become a man and goes by the real name of Brett Ambler.

Ever since the mysterious boy in a blue t-shirt has been relishing the fame he has been getting. After his identity was revealed, he did a small Q&A session on Reddit, where he admitted that he still can play the kazoo very well.

Ambler occasionally shares videos of him singing and playing guitar and kazoo through his Instagram handle, where he currently has over 4.9 thousand followers.

He still uses the Kazoo Kid moniker which can also be seen on his Instagram and Twitter handle’s bio that reads, “Kazoo Kid, Actor, Musicker, General Monkey.”