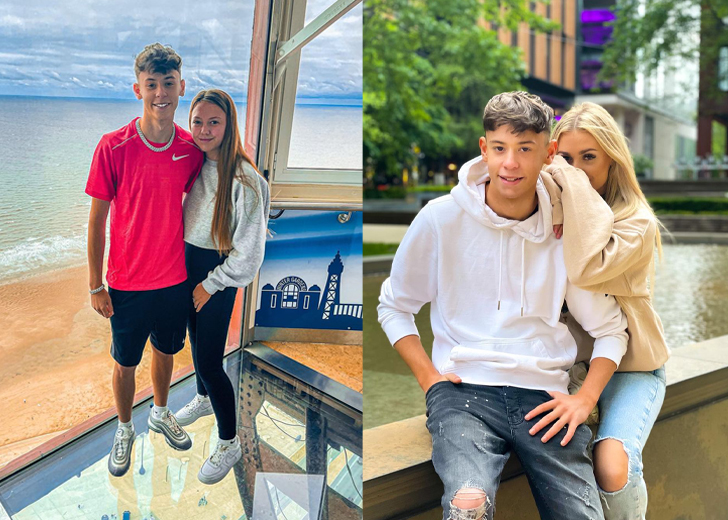 Bailey Nelson is a young YouTube star who regularly uploads entertaining videos, such as vlogs, challenges, and more, on his self-titled YouTube channel. Currently, his channel has garnered over 34,100 subscribers and 1.42 million views.

He is also well-known on social media platforms such as Instagram and TikTok, where he has over 76,500 and 1.7 million followers, respectively. On TikTok, he usually shares relationship content.

The English social media personality is tight-lipped when it comes to talking about his own relationship status. So far, Nelson has not given any hint on him being in a relationship and having a girlfriend.

However, his followers have been guessing for a while and have linked him to two ladies; Lexie Louise and Annie Lydia. The speculations of him dating either one of them started as he is usually seen sharing pictures alongside them.

Among Nelson’s two rumored girlfriends, the talks of him being together with Lexie Louise are the strongest.

The TikTok star has been sharing numerous pictures via Instagram as well as TikTok videos alongside Louise for a while now. Additionally, he has even featured her in a couple of his YouTube videos.

Besides, he has called her as his bestie several times in his Instagram posts. For instance, on December 22, 2020, he shared a picture in which Louise was riding on his back. He kept the caption short as he wrote “BESTIESSSS” with a red heart attached.

Despite all that, the two have never said anything about them being boyfriend and girlfriend. Furthermore, in his recent YouTube video titled “ARE WE DATING?” – Q&A FT. LEXIE,” both of them declined that they were dating and said that they were only good friends.

His Relationship with Annie Lydia

While the rumors of Nelson dating Louise still remains, there are also the talks of him possibly being in a romantic relationship with Annie Lydia, a fellow TikTok star.

The talks of them being together started when Nelson shared some pictures alongside Lydia on May 27, 2021. The pictures looked ‘couple-y’ and gave some hint that they might be dating.

Another post followed on June 8, in which Nelson was seen alongside her and his friend Harry in a mirror selfie. Besides, in the comment section of that post, Lydia had commented, “Oh Bailey I hate you for these.”

Nelson replied to her comment by writing, “no worries g.” In reply to that, Lydia had written, “hahahaha I love u.”

Though that comment still stands, neither of them has acknowledged their togetherness. Besides, following those two posts, Nelson has not shared any pictures with Lydia, making it look like they are just friends.

The Englishman was born in the year 2003, and as per that, his current age is 18. Nelson celebrates his birthday on the 17th of September every year. Around a week ago, he celebrated his 18th birthday.

The YouTuber was born and raised in the suburbs of Coventry, England. As per his date of birth, his zodiac sign is Virgo.