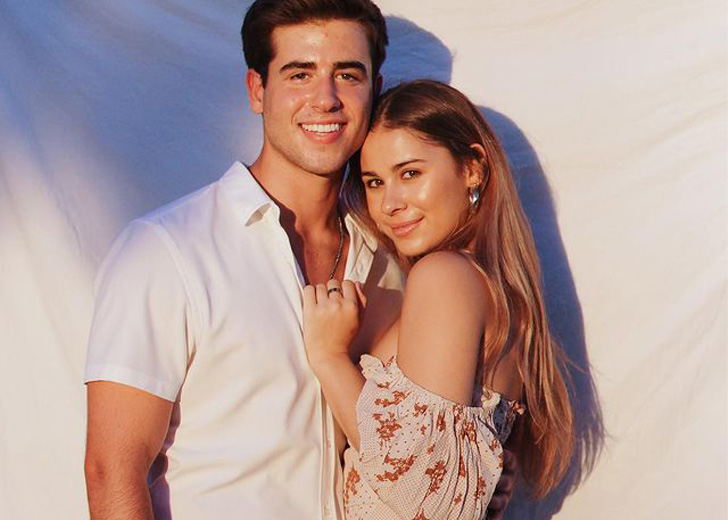 Adi Fishman is a well-known YouTuber and social media star who rose to fame for the comedy-centric content he shares on his YouTube channel.

But, he isn’t the only one earning the limelight, as his girlfriend, Emily Michelle Alexander, is just behind him. Emily is also a YouTube star known for sharing comedy, pranks, and other engaging content on her channel.

Together, the YouTuber boyfriend-girlfriend duo is having the best days of their life, sharing their togetherness and lovable bond with their fans.

Adi Fishman and Emily Michelle Alexander’s togetherness takes us back to their high school days. The two met each other while studying at the same high school. They initially started as friends and eventually confessed their feelings for each other.

They officially began dating on September 10, 2017. Since then, the duo has been relishing the time they spend with each other.

On October 23, 2017, Emily shared two lovely pictures alongside Adi and announced her togetherness. “last homecoming with my love,” she wrote in her caption.

They never miss any chance to flaunt their cute bond on their social media handles. On August 11, 2019, Emily took to her Instagram handle to wish Adi on his birthday. She added a caption writing, “happy birthday sweet baby! you inspire me everyday and I love youuuu.”

They celebrated two years of dating relationship on September 10, 2019. Later, they even created a couple channel named Adi&Em, which has garnered over 447 thousand subscribers, as of this writing.

Although the two are yet to plan on having a baby or expanding their family, they have adopted a pet dog named Skye Alexander-Fishman. On July 22, 2020, Emily shared a series of pictures alongside Adi and their pet dog and captioned it writing “officially a family of 3.”

On February 14, 2021, Adi and Emily celebrated Valentine’s Day. They also went on their “Dream Vacation” to the Caribbean recently. Both of them shared glimpses of their stay via their respective YouTube channels.

Who Is Emily Michelle Alexander? Her Career and Age

Emily is an uprising social media star who runs a self-titled YouTube channel. Her channel was created on January 8, 2018, and has gained more than 662 thousand subscribers and 57 million views.

She achieved the feat by posting comedy/prank videos, clothing hauls, fashion vlogs, and other videos. She has also garnered more than 514 thousand followers on her Instagram handle.

Born in 2000 in the United States, the YouTube star celebrated her 21st birthday on March 23, 2021. Her zodiac sign is Aries. Not much is known about her family life, other than that she has a sister who has appeared on her videos.

How Old Is Adi Fishman? His Short-Bio

Much like his girlfriend, Adi Fishman is also an aspiring YouTuber who has garnered over 1.93 million subscribers and 263 million views on his self-titled YouTube channel. His channel was created on May 21, 2018.

He is also quite popular on Instagram and Twitter, with more than 782 thousand 10.7 thousand followers on respective social media platforms.

Hailing from the suburbs of Los Angeles, California, Adi was born in 2000. He celebrates his birthday on the 11th of August every year. His zodiac sign is Leo. He stands at a towering height of 5 feet 8 inches (1.78 meters).

Sadly, there isn’t much to talk about his parents as he likes to keep their details up to himself only. Nonetheless, he has two older siblings, a brother named Tal Fishman and a sister named Shani Fishman.

His older brother is a YouTube star plus an actor. Tal runs a YouTube channel named Reaction Time which has over 15.2 million subscribers and 4.24 billion views.