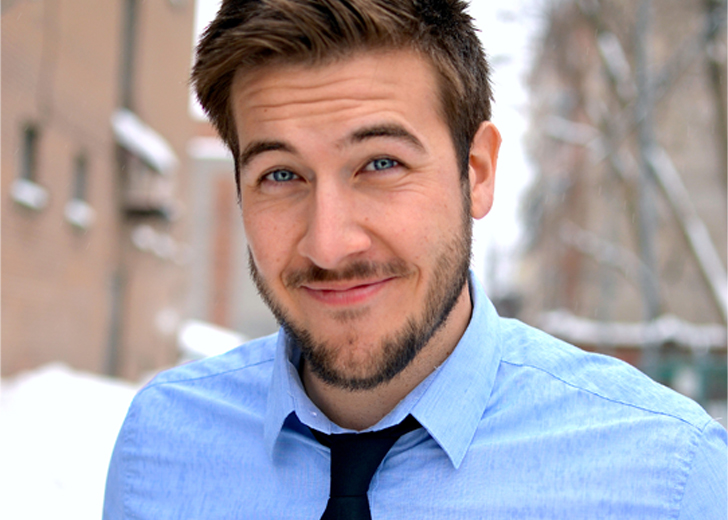 Ryan George is one of those comedians who have managed to gain success and earn the love of his audiences. The Canadian comedian is mainly recognized for his original scripted comedy series ‘Pitch Meetings,’ which is available on the Screen Rant YouTube Channel.

George not only stars in the videos, but he also writes, edits, and shoots them. The series has accumulated over 300 million views so far, with new episodes uploaded every week.

He also runs his self-titled YouTube channel, where he makes original sketch comedy videos and talks to himself. The channel has garnered over 1.14 million subscribers and over 227 million views.

Well, it must be hard for George to do all those works by himself, right? Well, it’s quite the opposite as it’s “Super Easy, Barely an Inconvenience” for him.

He celebrated his special day by going on paddling to a nearby lake with his lovely girlfriend. “It was a good birthday I liked it thank you. #welehele,” he wrote while sharing some snaps from that day.

Going into the details of his education, he initially went to Dawson College to study Cinema, Video & Communications. In 2008, he received his degree in DEC. In the same year, he joined Concordia University and studied Communication Studies. He graduated in 2011 with his Bachelor’s Degree.

As for George’s measurement, he stands at a towering height of 6 feet (1.83 meters). Information on his weight is still not known.

The YouTuber is very private about his family life and has kept most of the details of his parents and siblings behind the curtains. Nonetheless, he often shares pictures alongside his family on some special occasions while maintaining their privacy.

For instance, on September 28, 2019, Ryan shared some snaps from his sister’s wedding, which took place in Montreal, Quebec. In those pictures, he was accompanied by his father, mother, and sister.

All of them looked happy as they shared quite a laugh, as seen in those pictures. The comedian added a finishing touch of humor as he captioned the pictures writing, “Had the massive honour of officiating my sister’s wedding and essentially becoming the new pope.”

George Is in a Blissful Relationship

The comic YouTuber is currently in a romantic relationship with his long-time girlfriend, Melissa Parapluie. His girlfriend is a Barcelona native who is currently residing in Montréal.

George and Parapluie officially began dating each other on July 1, 2013. Since then, the couple has always been together, supporting each other in every circumstance.

The two love to travel around, which is evident from the pictures George shares through his Instagram handle [Parapluie’s Instagram profile is private]. For instance, on October 9, 2017, he posted a selfie alongside his beau, captured in front of a lake.

As time flew by, the boyfriend-girlfriend duo’s bond became stronger. On July 1, 2019, they celebrated their 6th dating anniversary. On that special day, George shared a cute selfie captured during the initial days of their relationship.

“Look how young we were! Happy anniversary bee love…you the best #welehele,” he wrote in the caption. Likewise, on this year’s Valentine’s Day, he shared a few snaps and captioned it writing, “Whoa it’s our 7th Valentine’s Day together holy moly geez.”

George’s most recent picture of his partner was on March 11, 2021, when he posted a series of pictures on the occasion of Parapluie’s birthday. His caption on that post read, “Happy birthday to my most favoritest person in the world. We gonna go on so many more adventures together oh man it’s gonna be crazy.”

Going by that, it surely seems that the duo of George and Parapluie are made for each other, and they are going to have some more amazing days before finally sharing the wedding vows.

‘Pitch Meetings’ Provided Him The Breakthrough

George started his career in April 2005 as an Operations Supervisor for Cineplex Entertainment. While working there, he co-founded Moving Mind Studio, a sketch comedy group, alongside his two friends in April 2010.

In September 2010, he also began working as a Teaching Assistant: Intermediate Film Production at Concordia University and left it in April 2011. Two months later, he left his position at Cineplex Entertainment.

In February 2016, he finally joined Screen Rant as a video producer. In November 2017, George launched the series ‘Pitch Meetings’ on the Screen Rant YouTube channel, which consists of him playing both a screenwriter and a movie producer.

In those comedy skits, he summarizes movies and TV shows plots by “pitching” ideas to a studio executive while pointing out problematic parts and plot holes. The series was successful, and Ryan got his breakthrough.

While the skits were becoming popular, George’s catchphrases were also loved by the viewers. Some of the catchphrases include “Super easy, barely an inconvenience,” “(blank) is tight,” “I don’t know,” and “whoops, whoopsie.”

His talent was later discovered by actor-comedian Kevin Hart, which led to the creation of the Campus Law series. The series was made with the help of his sketch comedy group ‘Moving Mind Studio’ and was streamed on Kevin Hart’s streaming service Laugh Out Loud.

While doing all of that, George was also gaining a great feat through his self-titled YouTube channel, where he makes short skits. Some of the popular skits series on his channel are ‘The First Guy,’ ‘Explaining to an Alien,’ ‘The Future is Dumb,’ and other random comedy skits.

George’s popularity is rising as we speak, and he is using the platform to entertain the audience. With such a flourishing career, he must have accumulated a healthy sum and have amassed a good net worth.

Well, Ryan George currently boasts a net worth of around $500 thousand – $1 million.