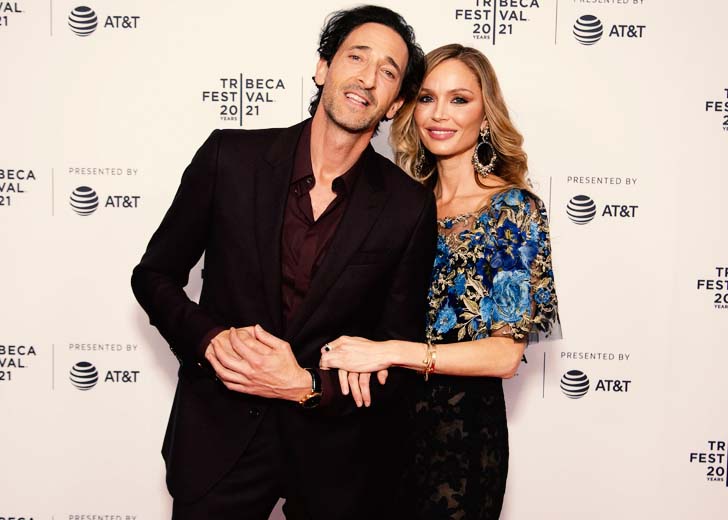 Adrien Brody has earned great fame through his iconic roles in different movies and TV shows — whether it be Wladyslaw Szpilman in The Pianist or Luca Changretta in Peaky Blinders.

But, what remains unknown about the American actor is his personal life. Brody has always managed to keep his love life under the wraps and away from the presence of the media.

However, tidbits of information have been found, and it’s been reported that he is in a romantic relationship with English actress and fashion designer Georgina Chapman. But, are the two married?

As of this writing, no official reports have confirmed that Chapman is married to Brody and that she is his wife.

The couple keeps their love life away from their limelight and prefers secrecy. So, many might have the idea that they might have shared the wedding vows in private. But, alas, it doesn’t seem that way.

So, the actor’s fans might have to wait for some more time before they can see him tying the knots with the fashion designer.

Brody and Chapman’s dating rumors first originated in 2019; however, at that time, nothing was confirmed.

The rumors got stronger in February 2020 when the two were seen having a candlelit dinner with their friends. The speculations were confirmed by Page Six when a source close to Chapman verified the news to the outlet.

The outlet also reported that the couple had known each other for a while and socialized before dating each other. Their friendship took a turn after they attended model Helena Christensen’s swimwear line in Puerto Rico in April 2019.

One month after their togetherness was confirmed, People Magazine got words from a film industry source that Brody and Chapman have been dating for a while. “They have similar interest and she thinks he’s unusual and interesting,” the source added.

Continuing their statement, the source said, “She finds [him] to be an interesting person with a deep passion for his work that is similar to hers.”

After dating each other for almost two years, in June 2021, the duo finally confirmed their togetherness by walking down the red carpet at the 2021 Tribeca Film Festival. They were there to attend the premiere of the movie Clean in New York City.

As they walked down the red carpet, Brody had linked his arms with his girlfriend and they took each other’s heads closer as they posed for the cameras.

One month later, in July 2021, Chapman again accompanied her boyfriend to the premiere of Brody’s movie, The French Dispatch, at the Cannes Film Festival in France. On the red carpet, they even shared a kiss.

Following that, both of them have kept their relationship low-key and continued their love in private. As of now, they are yet to make their togetherness Instagram official, and only time will tell when they will do so.

In their marriage, they were blessed with two children; a daughter named India Pearl Weinstein and a son named Dashiell Weinstein.

Their togetherness came to an end on October 10, 2017, when Chapman announced that she was divorcing Weinstein after numerous women made indictments of rape, assault, and sexual harassment against Weinstein.

The now-former couple reached an agreement in January 2018. The former film producer paid around $15 million to $20 million in the divorce settlement to the fashion designer. She also got the primary custody of their two kids. Their divorce was finalized in July 2021.

Following her divorce, she remained single for a while before dating her present partner, Brody. As per People, the actor diverted Chapman’s attention from the pain of her situation [of her ex-husband] and subsequent split.

Coming over to the Academy Award-winning actor’s past relationships, Brody had previously dated Michelle Dupont (from 2003 to 2006) and Elsa Pataky (from 2006 to 2009).

Posted on August 31, 2022August 31, 2022
Josh Gates and his ex-wife Hallie Gnatovich lived apart for more than a year and a half before getting divorce.
Read More