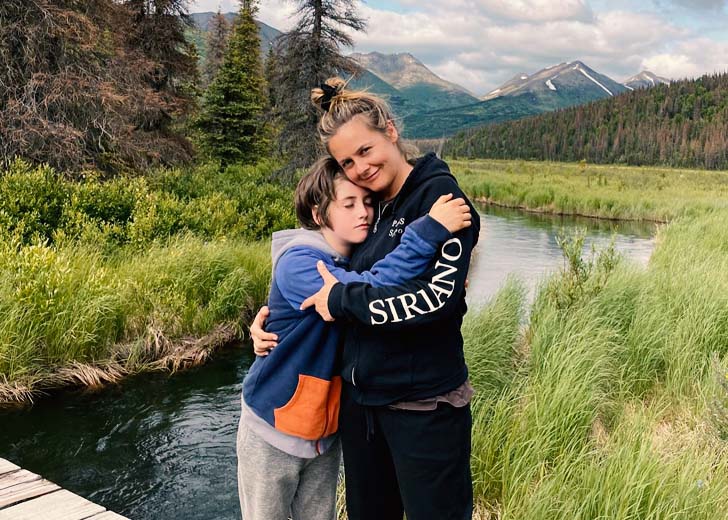 While her professional life remains known to her fans, what has raised their curiosity is her personal life. Some of them have wondered if she is married to a husband or dating a boyfriend.

Who is Alicia Silverstone married to?

Silverstone was previously in a marital relationship with an American musician named Christoper Jarecki. Their relationship initiated sometime after their first meeting in 1997, outside of a movie theater.

The now-former duo eventually began dating each other. After being in a relationship for several years, around early 2004, they got engaged. Jarecki had used his grandmother’s ring to propose to the actress.

Sixteen months later, they decided to walk down the aisle. On June 11, 2005, they shared the wedding vows among close friends and family members in a beachfront ceremony held at Lake Tahoe.

Almost six years after their marriage, on May 5, 2011, the couple welcomed their first child, a son named Bear Blu Jarecki. Extra happiness was added to the family of two when it expanded into a family of three.

As time flew by, the couple relished the time they spent with each other, and it was a happy family. However, little did everyone know that even the happy-looking couple had some flaws in their relationship.

In February 2018, reports came out that the duo had separated. Three months later, in May 2018, Silverstone filed for divorce against Jarecki, citing “irreconcilable differences.” Their divorce was finalized in November 2018.

As a part of their divorce settlement, the actress had to pay her ex-husband $12,000 per month in the form of spousal support until January 31, 2024. But, there is the condition that she will stop paying the money “if he chooses to live with a romantic partner for at least five months in a 12-month span.”

Regarding her divorce, Silverstone told Redbook, “Obviously, it’s heartbreaking. You don’t ever think you’ll be apart when you get married. All I can really say is that we’ll co-parent Bear together, and this is completely a good thing for both of us.”

As of now, the two still have a friendly relationship and co-parent their only son in the best way they can.

In 2012, an internet controversy surrounded Silverstone when a video of her went viral. In that video, she was seen chewing up food and then feeding it to her son. Reports also came that she was limiting her son to a vegan diet. Many called it bad parenting.

However, the vegan actress had her own thought behind it. In an interview with Entertainment Tonight, she mentioned, “He’s such an example of health. This is a plant-based child.” Despite her statement, some feared that her son might lack nutrients that vegan food might not provide.

But, Silverstone cleared up that issue too during one of her interviews. She said, “I’m open to Bear being a little bit flexible out in the world. When he is with other kids eating regular pizza – if there’s no vegan pizza, I want him to have the pizza. I always try to make sure that at some point he gets some brown rice in him and some greens.”

Is Alicia Silverstone dating anyone now?

After her divorce from her longtime partner, Silverstone is open to dating a new partner. In her interview with Redbook in June 2018, she was asked if she is dating. To that, she replied by saying:

“Yes, I go on dates, and I find it very fascinating meeting interesting, intelligent, different people. I’m super excited about being available and open to whatever’s next. Of course, there’s tons about it that’s confusing. I call my girlfriends and I’m like, ‘What does this mean?'”

A few months before, in October 2021, the actress told Drew Barrymore that she used dating app twice following her divorce — first using a fake name and then using her real name — but she was banned both times.

Considering that she is open to dating, has she dated anyone post-divorce? Well, on April 30, 2021, the 45-year-old actress was caught having a lunch date with a mystery man, whose identity is yet to be disclosed.

DailyMail reported that the two were making their way out of a West Hollywood eatery named Urth Caffe. The outlet said that they were sharing laughs during their lunch and continued their conversation after walking out.

Additionally, they kept everything straightforward and didn’t share any PDA moments or even hold each other’s hands. For their lunch date, Silverstone donned a colorful prairie dress along with brown suede boots.

On the other hand, the mystery date had worn a white shirt, blackish jeans, and white sneakers.

It is currently unknown if they are dating or not. Silverstone hasn’t mentioned it and has neither hinted at any new relationships. Similarly, as her date’s identity remains unknown, no other information could be found.

To conclude, it could be said that Silverstone’s present relationship status seems single, with her being open to dating the proper boyfriend.

Before being open to dating again and getting married, Silverstone was involved in a couple of short-term relationships.

Her first known relationship was with an actor named Stephen Dorff. They dated for a short while only after meeting each other in 1993 for Aerosmith’s music video, Cryin’. In that video, they even shared a kiss.

After that, she was dating another actor, Adam Sandler. They briefly dated for one month only — from March 1996 to April 1996. Not many details are known about their togetherness as they kept it low-key.

Besides these two relationships, little to no information could be found regarding Silverstone’s dating history.