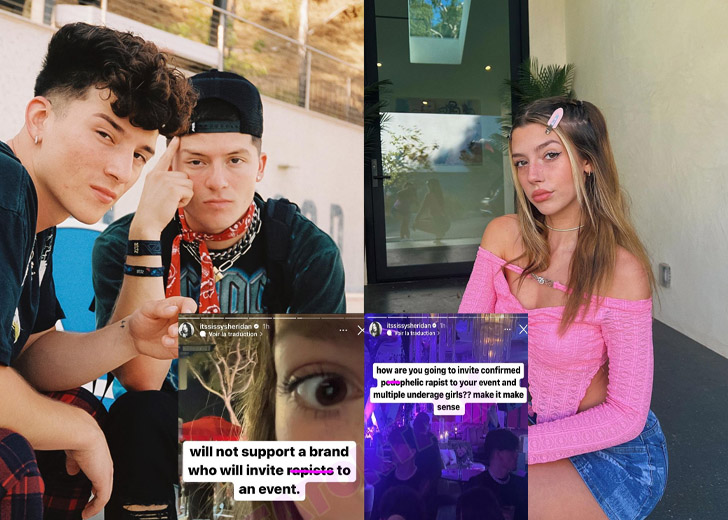 Sissy Sheridan has gone all out against White Fox and the Lopez brothers!

Sissy Sheridan has slammed the White Fox boutique for inviting Tony Lopez and Ondreaz Lopez, aka the Lopez brothers, to their event and After Hours party.

On October 19, 2022, the social media star took to her Instagram handle to share four stories where she criticized the clothing brand and revealed that she felt “sick” after seeing the Lopez brothers at the event.

Her first story contained a picture of the Lopez brothers taken from a distance at the event. At the top of the image, she wrote, “how are you going to invite confirmed pedophilic rap—ts to your event and multiple underage girls?? Make it make sense.”

Sheridan’s second story about that event contained a zoomed-in picture showing half of her face. In the photo, she mentioned that she would not support a brand that invites rap—ts to their event.

The third and fourth story was made through Instagram’s create mode and didn’t contain any pictures. In her third story, she wrote that she felt absolutely sick to her stomach walking into White Fox’s event and “seeing the Lopez brothers who are confirmed pedophilic rap—ts.”

Sissy Sheridan Slams White Fox for Inviting the Lopez Brothers to Their After Party (Photo: Instagram)

“Completely irresponsible and disgusting to invite rap—ts in the first place, let alone at a women’s clothing event where the main demographic is underage girls,” Sheridan added.

In the end, aka her fourth Instagram story, Sheridan related to herself and wrote, “as a woman who has been assaulted, to see brands turn a blind eye at r—e for a potential story post at their event is more than disappointing. To choose a bit of clout over morality is absolutely disgusting.”

After the 18-year-old TikTok star shared those stories, it was quickly reposted by TikTok Insiders’ Instagram handle as well. Under that post’s comment section, Instagram users dropped their views, and many agreed with Sheridan.

For instance, one user wrote, “Finally someone used their voice. Proud proud!”

“An influencer actually calling out weirdos! That’s a first,” one commented, with another adding, “she’s so correct. they are so [explicit] for inviting him.”

Furthermore, one Instagram user said, “Proud of her for posting this. It all starts with brands and who they endorse. If brands continue to endorse people like the Lopez brothers, young children think it’s okay too, and blindly support them. Shame on companies, especially those who focus on women clothing/products/etc. that do stuff like this.”

As for what Sheridan was referring to on her Instagram stories, the Lopez brothers have previously been accused of engaging in inappropriate acts with their underage fans.

Tony Lopez was the first among the Lopez brothers who faced these allegations when three underage girls accused him of asking for revealing images despite knowing that those girls were underage. When those allegations surfaced, Tony denied them.

As for the other Lopez brother, Ondreaz Lopez, his name also popped up in 2020 after a phone call between him and a 14-year-old victim’s mother leaked. In the phone call, Ondreaz seemingly admitted to his crime.

And when this news surfaced on the internet, several of Ondreaz’s friends began unfollowing him and removing any trace of him from their social media platforms. Not only that, but his then-girlfriend, Hannah Stocking, also broke up with him.