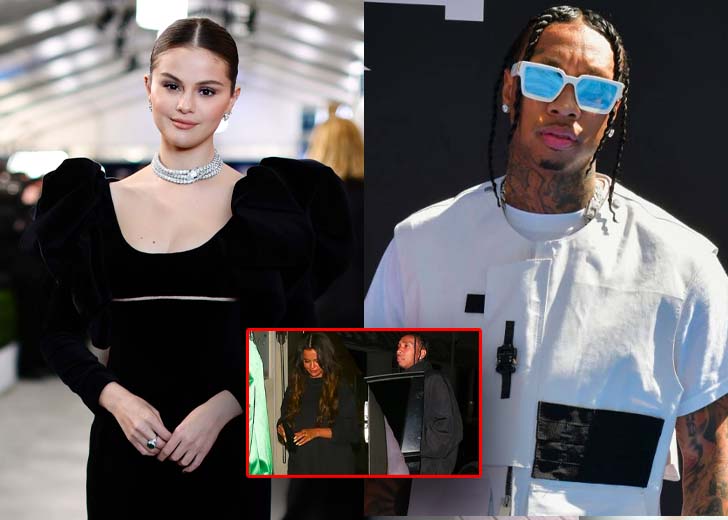 Selena Gomez, who has been openly single for years, is aware of this phenomenon. She has spoken about how it only takes a single snapshot of her with a coworker or male friend to spark relationship rumors.

Twice in the past month, it has happened to her, leading some media sources to speculate that she might be dating Tyga or Andrea Iervolino after pictures of the two of them spending time together surfaced on the internet.

Just like that, pictures dropped by TMZ of Selena Gomez and Tyga spending some time together at The Nice Guy, a celeb hot spot, raised many questions among the fans.

Fans were curious to know what happened inside the restaurant and how they ended up being together at The Nice Guy. They even assumed that the two might be dating each other.

Having said that, the rumors are false, as the source close to Gomez addressed the dating rumors and said that they are not dating each other.

Selena Gomez was spotted with Tyga at The Nice Guy

Gomez and Tyga were seen hanging out together at the L.A. hot spot, The Nice Guy, past the closing time, as per TMZ. The pair were spotted leaving The Nice Guy in West Hollywood Wednesday morning, 17 August.

Gomez left from the back door while Kylie Jenner’s ex-boyfriend Tyga departed from the front door around 2:30 a.m. The fans immediately speculated that they might be dating each other. Tyga was also at Selena’s 30th birthday party with her friends last month.

Different sources reported that the singer arrived at the restaurant just before midnight, and Tyga was already inside.

However, Gomez is not dating Tyga, and all the dating rumors halted when TMZ revealed that the artists are not dating each other.

A source [presumably her team] close to Selena told TMZ, “the two aren’t dating, they were there separately to see different people, and their groups ended up hanging out together inside.”

As soon as fans heard Gomez and Tyga were spotted together, they took it to social media, especially Twitter, and shared their opinions on the matter.

Many of the fans were taken by surprise as one of the fans wrote, “Tyga and Selena Gomez?” while another tweeted, “Selena and Tyga?Mami No.”

The third person expressed, “Tyga x Selena Gomez when.” The next tweet read, “I hope Selena was just hanging out as friends with Tyga.”

Similarly, Gomez was recently spotted with filmmaker Andrea Iervolino in Italy. She was seen having dinner with the filmmaker during a vacation in Italy with friends.

The picture of Iervolino helping Gomez while swimming was shared across various social media platforms, where fans questioned if something was going on.

A source told Us Weekly that they are “just friends,” and also revealed that Gomez is “dating and is keeping her options open with a few guys” and continued, “she is really happy and is perfectly OK with being single.”

The producer of 13 Reasons Why claimed earlier this month that she eventually wants to quit Hollywood and focus on parenthood, despite the fact that she is not ready to settle down just yet.