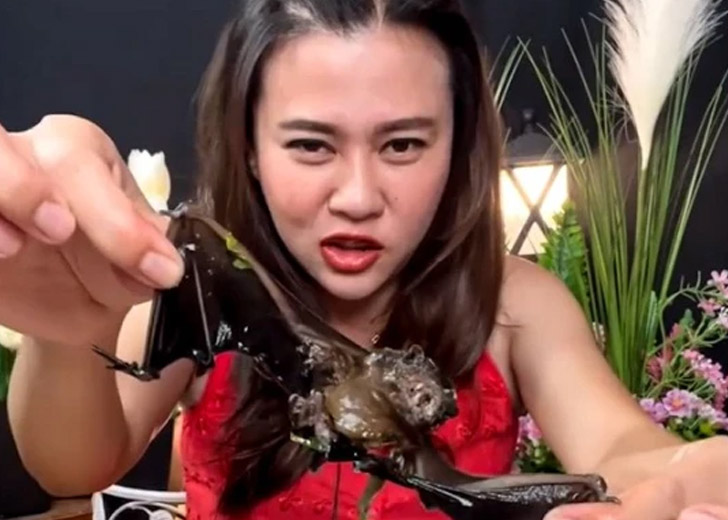 Phonchanok Srisunaklua has been jailed for five years after videoing herself devouring an entire bat.

The Youtuber has been arrested for five years after videoing herself devouring an entire bat in a bowl of soup.

The dead animals were floating in a mud-colored soup with cherry tomatoes in the 1-minute 40-second video she posted to her Gin Zap Bep Nua Nua YouTube account.

She was then seen tearing the animals apart and soaking them in a hot sauce called Nim Jam after describing the bats as “delicious” and comparing them to “eating raw meat.”

The food content maker can be seen holding up a full bat to the camera at one point and saying, “It has teeth,” before continuing to crunch on the bones and remarking, “The bones are soft.”

Angered viewers who were frightened by the potential health repercussions rapidly bombarded the “bat soup” video with complaints.

Veterinarian Pattaraphon Manee-on, director of the animal health management group at the Department of National Parks, Wildlife, and Plant Conservation was shocked when he saw the video.

The veterinarian emphasized that the occurrence should not occur in Thailand or anywhere else globally because it was a highly unsafe behavior, mainly because bats have a lot of pathogens.

Manee-on also claimed that simply touching saliva, blood, or skin is regarded as dangerous. In addition to the issue with the sickness in bats, he claimed that because bats are protected creatures, Phonchanok may have violated the Preservation and Protection and Wildlife Act, B.E. 2019.

He said, “Because the incident should not happen both in Thailand and around the world, it is very risky behavior, especially as bats have a lot of pathogens. There is no proof that the hot water temperature will actually kill the germs.”

Some specialists claimed that bats carry over 10,000 diseases that might spread to people and cause a new epidemic.

The YouTuber was recently detained for “crimes violating the Computer Crimes Act of 2007” and “possession of protected wildlife carcasses.”

After disputing the allegations, the woman later produced a second video in which she expressed her regret to “society, doctors, media, coworkers, family, and friends.” She also said she would stop eating bats.

People expressed disgust and anger after watching the now-deleted bat-eating video, which generated a lot of buzz.

Many people believed it inappropriate, and others described it as “vile” and “disgusting.”

“If you’re going to die, die alone. Nobody will accuse you. But if you create a pandemic, you’ll be doomed,” one person added.

Another noted, “What a very unpleasant, nasty piece of work. Let her be locked up.”

A user tweeted, “Disgusting ,how can any one want to eat these disease spreading rodents.!”

The following tweet read, “Hope she gets more than 5 years in jail. Repulsive.”