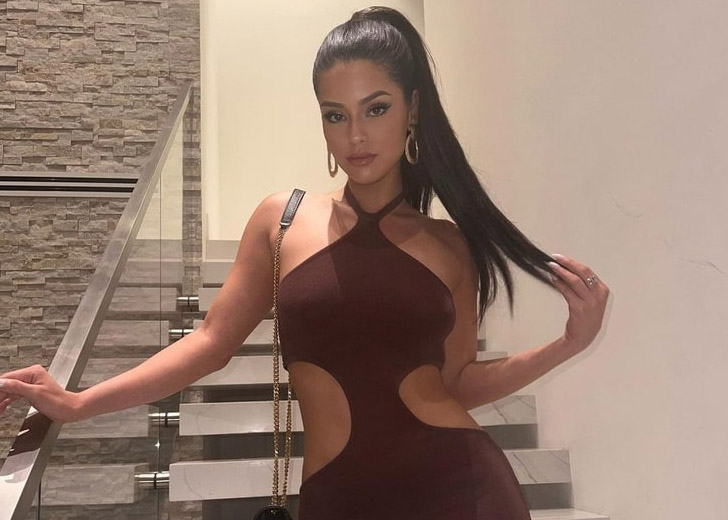 American TikToker and actor Nate Wyatt’s girlfriend Alison Sarzoza has been a topic of discussion on the internet after an Instagram story [shared by her friend] went viral.

Many fans believe the influencer allegedly used the N-word in the video. And after fans started calling Sarzoza out for saying the N-word, her friend deleted the N-uttering story from her highlights.

The story was later re-posted by the tea page under the handle @teatoktalk.

However, the video itself is unclear, and therefore, it would be wrong to comprehend that Sarzoza precisely said something like that.

A representative for the influencer exclusively told Glamour Buff that it is all “false allegations.” “Ms. Sarzoza obviously does not say the N-word in the video, and that the allegations against her are completely false,” the rep added.

The rep also stressed that the false allegations had invited unwanted hate for her, while asking netizens to be kind towards her.

Netizens got upset with Alison Sarzoza

After the video went viral, many viewers were quick to pass their judgment and express their disappointment. One wrote, “When are people gonna learn to stop using the n-word like wtf it’s not that hard not to say it.”

Another comment read, “so sick of this c—k and her continually getting away with every damn thing and playing the victim.”

The third noted, “and nate says she isn’t racist…explain this then mr wyatt.”

On the other hand, TikTok star Sarzoza’s boyfriend Nate Wyatt, who recently got back together, defended her by saying that she has black friends and is not racist. He said that during the Fortnite live broadcast.

He claimed, “Allison is the least racist. I am literally half black. Do you think I am gonna be with someone who is considered racist.”

Wyatt urged people to trust him and said he would not be with his girlfriend if he sensed any racism in her.

Again, his supporters were furious at how he supported his girlfriend as one of the followers noted, “at his grown age, he will continue to stay blinded.”

Another angered fan added, “What does her having black friends have to with her saying the n word come on now.”

“Having black friends is Definitely not an excuse to be racist that just disgusting and don’t even get me started on him trying to justify her actions with saying the N word,” wrote another enraged follower.

Similarly, prior to this incident, Sarzoza was allegedly caught body shaming the Mian Twins, who go by @miantwins on TikTok.

It all began when Cole Etgen, a fellow TikToker, went live on TikTok. In addition to conversing with his male and female companions sitting next to him, he also talked to Sarzoza live via face time. How the conversation began is unclear.

However, when discussing Sarzoza’s replacement, Etgen allegedly said that the Mian Twins were mentioned after noting that there was no better replacement for Sarzoza.

Etgen said Sarzoza was a better, slimmer version of Aisha Mian. Then Sarzoza chuckled and allegedly remarked, “Did he say better?”

Nonetheless, Sarzoza apologized via her Instagram stories and wrote a lengthy apology following the Instagram live incident. The apology clip has since been deleted but has been shared by several tea pages.

Disclaimer: All the claims and incidents mentioned in the story have been picked from various online sources, and we, Glamour Buff, do not actually assert them or intend to defame anybody in any capacity. If you feel the article is demeaning to someone, please write an email to us, and we will try our best to correct it.