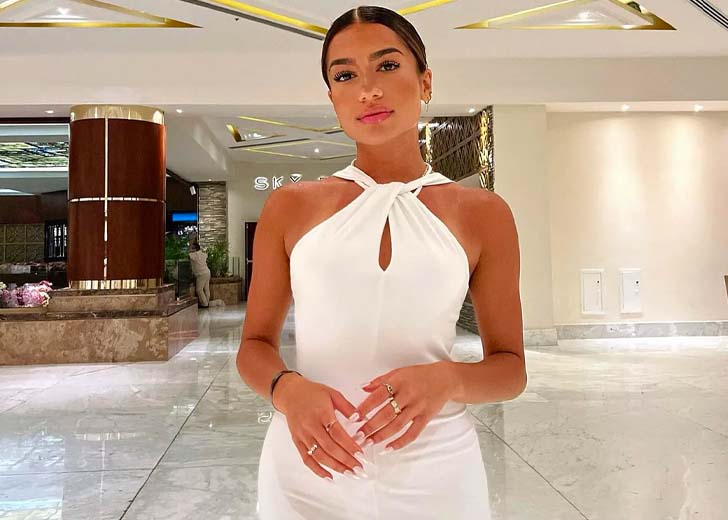 Aisha Mian’s dating life is always up for discussion amongst her fans and followers. They constantly ask who her boyfriend is and, at times, even question her twin sister, Arza Mian, about it.

Aisha, on the other hand, does not reveal much about it. The Mian twins rose to fame by vlogging and doing challenges on a YouTube channel named Squared.

Since then, they have been a part of Triller Compound and gotten quite famous on TikTok. As the influence of the twins has been growing over the years, they have amassed a lot of fans and followers.

Their personal lives have made headlines a couple of times. More than Arza, Aisha’s dating life is discussed.

This is because there have been rumors about Nate Wyatt being her boyfriend.

The details about Wyatt and Aisha dating are a little murky. At times, they have hinted that they are dating, but other times, it has been revealed that Wyatt has a girlfriend.

There, the twins were talking to the paparazzi about their vacation to New York when the paparazzi asked if they had any plans on celebrating Thanksgiving with Wyatt.

Aisha replied that she had been spending time and hanging out with him, but she never explicitly mentioned that she was dating Wyatt. However, they were making TikTok and Triller videos together, further fueling the speculations.

Fast forward to February 2021, Wyatt did an interview with Entertainment Tonight. There, they discussed the reality show he was on called Twin My Heart.

Then, the topic shifted to Aisha, and the interviewer asked if the pair were dating. Wyatt said that they were just friends, and it was their fans who shipped them.

Wyatt also gave the same answer when asked if he would date Aisha in the future. Then, the interviewer asked if Wyatt he had chemistry with Aisha, to which Wyatt said he would not answer that question.

He ended the topic by saying Aisha was an “amazing friend” who he hung out with.

Once again, the duo sparked rumors about dating in September 2021 when Wyatt uploaded a TikTok dancing with Aisha in a matching green sweatshirt and pants.

Nate Wyatt has been rumored to be Aisha Mian’s boyfriend and the pair are allegedly dating. (Source: Instagram)

They danced to ‘Heart Don’t Stand a Chance’ by Anderson Paak. Wyatt wrote nothing in the captions and just tagged Aisha. Many speculated that Wyatt was Aisha’s boyfriend, but they hid their relationship.

However, Wyatt denied all the rumors and said that the two were just making content, nothing else.

As of December 2021, Wyatt was said to be dating Alison Sarzoza. Sarzoza had badmouthed and body-shamed the Mian twins, so there was a conflict between Wyatt and the sisters.

Eventually, Sarzoza apologized to them, but the twins said nothing. Wyatt also did not reveal if he was Sarzoza’s boyfriend or not.

As of 2022, it seems like Aisha does not have a boyfriend and is not dating anyone. But even if she is, she has not revealed it to the public.

How Can You Stop Workplace Bullying?