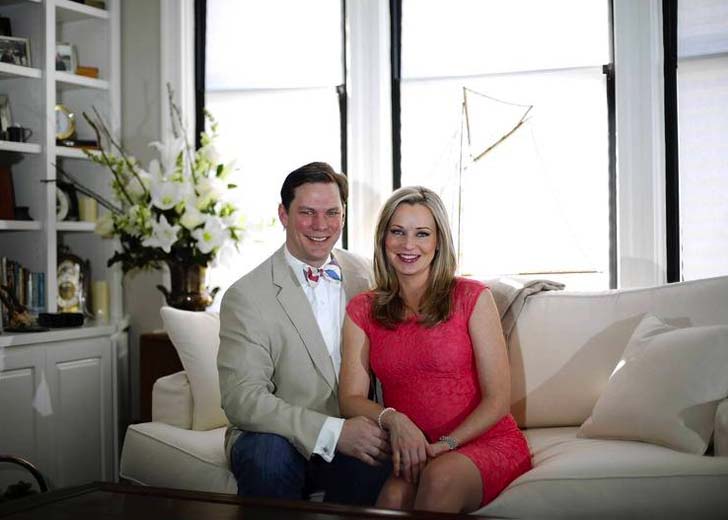 Sandra Smith and her husband John Conolly have been together for almost two decades.

It was love at first sight for Sandra Smith’s husband, John Conolly.

He knew he would get married to the current co-anchor of America Reports the first time he laid eyes on her. They have been married for over a decade and have two beautiful children.

Smith often posts pictures of her husband and children on social media, giving us a glimpse of her perfect family. At times, she and Conolly also give interviews to various tabloids, talking about their relationship history.

One instance was on April 14, 2013, when the pair sat down with Chicago Tribune and shared their love story.

Smith used to work at a hedge fund in New York before moving to Chicago. The Big Apple was where she grew up, and her family worked in the financial trading community.

But eventually, she moved to Chicago, where she found a job as a sales trader. On her first day at work, she was introduced by the head of the firm.

After everyone at the office, Smith was finally introduced to the last person on the desk who paid no attention to her. It was none other than her future spouse, Conolly.

Smith was 23 at the time, and Conolly was 35. The journalist’s first impression of him was decent and described him as “the tall, bow tie-wearing, wavy-haired, nerdy but handsome guy.”

He smiled at her and introduced himself. It was at that moment he knew that he would spend the rest of his life with Smith.

He said, “I knew right then that she was the girl I was going to marry.” But before their love story could start, there was a minor issue.

Smith’s first two weeks at the job were Conolly’s last. He had planned to leave the job to start a business of his own.

But luckily, Smith made the first move. One day, she was eating her lunch while watching TV at work.

She noticed that “there was something very familiar about the guy providing commentary on the financial television program.” The speaker was wearing a bow tie.

She realized that Conolly was not that at his desk and asked others if the guy on the TV was him. They said it was, and Smith asked him about his experience after returning to the office.

Smith was nervous, but Conolly coached her through it. Then after Conolly left the firm, Smith took over his job of giving commentary on the TV.

Slowly, the pair started getting closer. Conolly became someone special in Smith’s life.

She invited him to her first apartment in the city to check out the place. He recalled, “There was a bodega in the basement that happened to have a bottle of really overpriced Veuve Clicquot and a sleeve of plastic champagne glasses.”

Then, the pair went on their first date at Symphony Orchestra. They introduced some family members on their second date at the Museum of Contemporary Art. —  Connolly invited his mother and stepdad, whereas Smith’s cousin joined them.

After that, the pair were serious about one another, so their love story began.

From dating life to married life

Conolly had not dated much before Smith. The journalist joked that she reaped the benefits of it.

She said, “I don’t think I would have gotten all of John Conolly if I hadn’t met him at that time in his life.”

Soon, they traveled around, going on business trips. This continued for about a year before Smith was offered a job in New York at Bloomberg Television.

The pair then had a long-distance relationship. But regardless, they made it work.

Smith flew to Chicago almost every Friday to be with her partner. It was challenging, but they did not give up, and Conolly never complained.

Sandra Smith married her husband, John Conolly, on May 1, 2010, at the Holy Name Cathedral. (Source: Instagram)

He knew how vital Smith’s career was for her and supported her goals. Smith got another offer at Fox Business after spending a year at Bloomberg.

She was hired as an on-air reporter. This meant that she had to be in New York indefinitely. But again, the pair did not let his hurdle stop their relationship.

The duo married at the Holy Name Cathedral on May 1, 2010. However, they still had a long-distance relationship since Smith was at the Big Apple and Conolly in Chicago.

Then, in January 2011, Conolly moved to New York. He sold his business and got a job in the city. Finally, the pair were together and celebrating their married life together.

Maya Hawke's Parents Tried To Protect Her 'From Falling Into Acting'