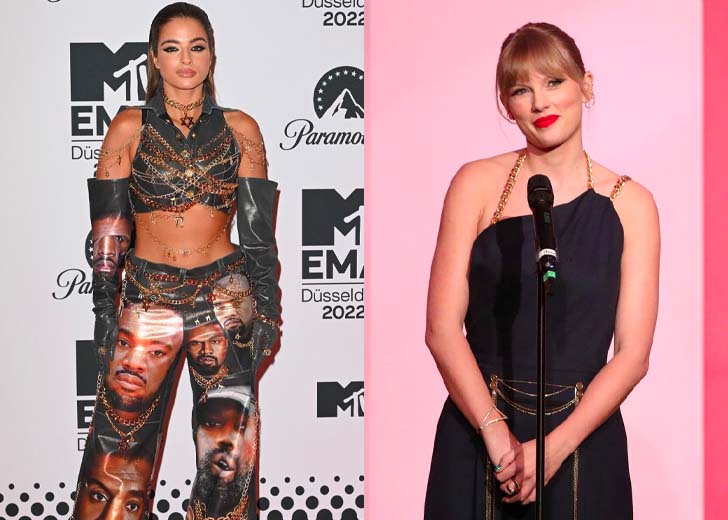 Noa Kirel, an Israeli pop diva, made a splash at the MTV EMAs on November 13 by arriving in a midriff-baring dress covered in images of Kanye West, also known as “Ye,” and decorated with a Jewish Star of David.

The pop star, who is Jewish, stated that she felt compelled to make a statement on the red carpet in response to Kanye’s anti-Semitic remarks regarding Jews.

Kirel noted to Variety that it takes some nerves, but she believes the message was heard, and she really wanted it to be a statement rather than simply a costume.

Donda’s singer face appeared on the pant legs and sleeve of the ensemble, which was a collaboration with Kirel’s stylist, Itai Bezaleli.

‘All Too Well’ artist Taylor Swift praised Kirel regarding her EMAs Outfit when she went to introduce herself to Swift. The Israeli artist noted that Swift also “liked the outfit.”

West went on a rampage of public appearances and interviews starting in early October, during which he proffered antisemitic remarks and conspiracy theories and criticized Black Lives Matter.

As a result, he was blocked on social media platforms, earning him widespread criticism and disapproval from peers in the industry.

On October 9, in an apparent misspelling of “DEFCON,” West tweeted that he would go “death con 3 on Jewish people.”

He asserted in the same post that he cannot be antisemitic since “black people are actually Jew also.”

The rapper was also banned from using Instagram after he posted a screenshot of a discussion with rapper Sean “Diddy” Combs in which West accused Combs of being under the control of Jews, using a well-known antisemitic cliche.

Adidas announced that it has “under-reviewed” its relationship with West in light of the latter’s erratic behavior. Forbes estimated that the value of West’s contract with Adidas was $1.5 billion overall and $220 million yearly. The rapper also ended a collaboration with Gap previously.

It goes without saying that ‘Love Story’ singer Swift and Kanye West’s relationship is, at best, shaky. At the 2009 MTV VMAs, the rapper cut off Swift’s acceptance speech for Video of the Year, for which he eventually apologized, and the pair’s strained relationship initially made headlines.

West said, “Yo, Taylor, I’m really happy for you, I’m a let you finish, but Beyoncé had one of the best videos of all time!”

A day after the event, the ‘Wash in the Blood’ singer claimed that the outburst was caused by a combination of “sincerity and booze” on The Ellen Show and stated he wanted to apologize to her in person.

Swift revealed on September 15, 2009, that the hip-pop star had called to apologize after a few days. When the artist called, she told ABC Radio that he was pretty honest in his apologies and that she had accepted it.

A year after the incident, the Midnights artist performed ‘Innocent’ at the 2010 MTV VMAs, which was rumored to be about West.

The lyrics were, “It’s all right / Just wait and see / Your string of lights is still bright to me / Who you are is not where you’ve been / You’re still an innocent.”

On June 16, 2013, the rapper took back his apology to Swift. At the time, he asserted that he did not have one regret to the New York Times.

He added, “If anyone’s reading this waiting for some type of full-on, flat apology for anything, they should just stop reading right now.”

West, on February 9, 2016, launched ‘Famous,’ at his Yeezy Show. It featured a jab at Swift. However, she slammed him by delivering a super-empowering speech during her 2016 Grammy Awards acceptance speech.

Swift expressed that as the first woman to receive an album of the year at the Grammys twice, she wanted to convey to all the young women out there that there would be others who wish to undermine your success along the way.