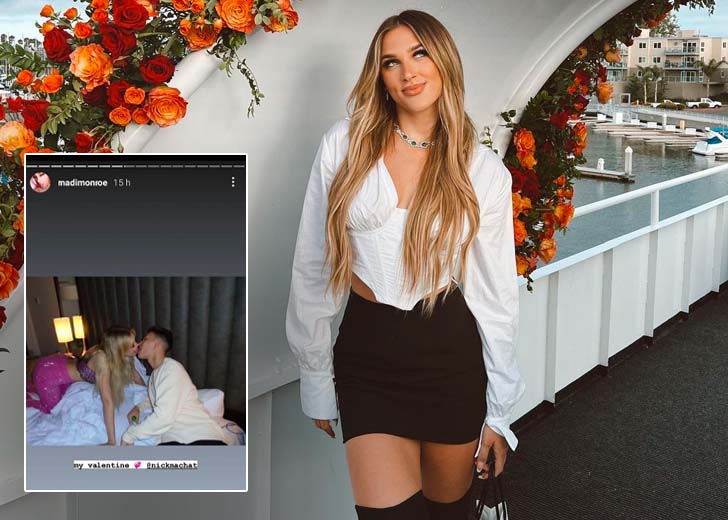 Madi Monroe gets cheated on.

Madi Monroe has had a roller coaster of a relationship with her ex-boyfriend, Nick Machat. After almost a year of dating, it seems they finally called it quits.

Monroe is a musical artist and a social media star. Although she started by trying to get her music out in the world, she’s gained global fame with creative TikTok videos and Instagram posts.

Recently, she’s made it to the headlines after calling out her cheating ex-boyfriend. Eventually, they broke up, and Monroe announced her breakup through TikTok. However, it wasn’t just any other breakup; the couple had a significant controversy on social media before the split.

The social media sensation confirmed her break up with Machat through a TikTok post this November. She posted with the caption, “I guess this is me announcing my breakup.”

In the post, she slideshows some pretty pictures of herself titled, “used to be a certified lover girl <3” Many fans supported her in her grief, but some weren’t happy about her relationship timeline. One of the fans wrote, “I cannot keep up with her relationships.”

The roller coaster of a relationship also took the fans for a rough ride. In an Instagram post by @tiktokinsiderinfo, a fan commented, “here we go again, she always says shes done with him. but goes back??”

In June 2022, Monroe called out a woman named Bella for hitting on her then-boyfriend. The controversy got huge as she posted a screenshot of Bella and Machat’s messages while blurring Machat’s side of the text.

However, this wasn’t the end of the controversy. Later, after some time, Bella responds to Monroe’s rage and reveals the whole chat box about what actually happened. Evidently, she was innocent, and instead, Machat seemed to be the one cheating on Monroe.

Bella specifically stated that he “accidentally” texted her because he thought she was his mom. However, on the way, he revealed some details that led to him being proven a cheater.

In the exposed text, they repeatedly refer to Bella as “mommy,” which makes Monroe believe that she might have been after him. But all there was an innocent gesture because Machat thought he was texting his mother when he texted Bella.

When she revealed the evidence, she clearly stated that Machat was trying to bring another girl home and texted Bella, thinking it was his mother. Bella also says that she saw both being intimate with other people at clubs.

She added that she even saw Machat kissing another girl. Later, he hit on Bella and her friends; that’s how it started.