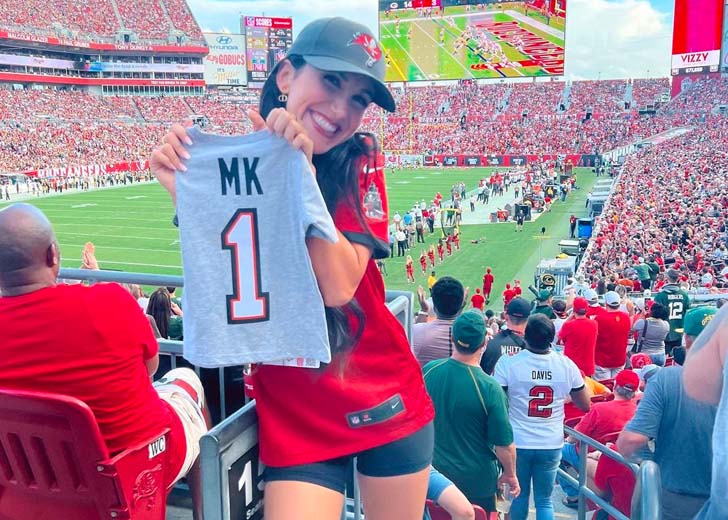 It’s been a while since Kat Stickler caught the public’s attention in a broader sense. But that has seemingly changed after her recent ‘PREGNANCY Q&A!!!’ video on YouTube.

The video has seemingly raised people’s eyebrows and made some think if Stickler is pregnant with her second baby [Stickler shares one daughter, MK, with her ex-husband Mike Stickler]. So, is Kat Stickler pregnant again?

And the answer seems negative — Stickler isn’t having a second baby, at least not now. So, what’s the video about? In the video, Stickler and Zeni talk about several things, including how they found out they were pregnant, their family’s reaction to their pregnancy, their wedding, and more.

How did Kat Stickler find out she was pregnant?

Before Stickler’s YouTube video’s intro plays out, she introduces Zeni to her viewers and tells them that Zeni is one of her closest friends and she loves her. She also said that Zeni got pregnant two months after she was pregnant with her daughter, MK.

After the intro, Zeni read the first question, “How did you find out you were pregnant?” “I peed on the stick.” Stickler immediately answered, with Zeni adding, “Me too.” Stickler continued, “Wow. Small world. What are the odds?”

Following the funny reply, Stickler answered more clearly and stated that she was with her roommates at the time. She went to the bathroom to do a pregnancy test for formality because she didn’t think she was pregnant as she had used contraception.

But contrary to her belief, she was indeed pregnant, after which she broke down and called her mother. However, her mother shot her down rather funnily. Stickler recalled her call with her mother and said:

Zeni then read the second question, “How did the people around us react [to the pregnancy news]?” Stickler recalled her phone call with her mother and said, “she hung up on me.”

She continued, “I remember I went to my friend Brook’s house, and she’s like such a good soul. She’s the sweetest person, and when I told her, she was like so sweet. She was trying to keep her calm, and she was in shock. She’s like, ‘Oh, it’s okay, oh.”

“She’s like, ‘What are you gonna do?’ So, I slept over that night at Brooke’s house; literally the night I found out I was pregnant,” Sticker added, after which she thanked Brooke and said, “I love you” to her.

As Stickler and Zeni moved further, wedding was the question to be answered. And as soon as Zeni said “wedding,” Stickler began laughing. “I feel like our experiences are very different,” Zeni added later.

After that, Stickler described her wedding with her now-former husband, Mike Sticker. She said, “Mine [wedding] was in a courthouse. I was with a bunch of families; they were getting their green cards. They all got it, so that’s a good sign.”

“It was no bueno in the sense that I was crying; my mom was crying. It’s just not what I experienced my wedding to be like,” she added before adding that it’s okay as she now has a second shot at a future wedding, which will be crazy when it happens.

And as they were talking about weddings, the topic of honeymoons was also discussed. Stickler mentioned that she and Mike went to her grandmother’s house for their honeymoon and that it wasn’t a joke.

“Now that I’m saying this out loud, I see the signs might have all been there. Maybe a couple of red flags here and there,” she said. In the end, Stickler stated that she was already pregnant with her daughter during her wedding to Mike.

A possible dig at her ex-husband’s new girlfriend

The next question on the list was, “If you were dating someone with a kid, would you post them on social media?” And while answering the question, Stickler seemingly takes a dig at her ex-husband’s new girlfriend, Tia Alannah Borso, aka Tia Borso — Borso has posted many pictures with Mike and MK.

Mike Stickler with his new girlfriend Tia Borso, who is holding his daughter MK (Photo: Instagram)

Stickler’s answer was, “No. Next question. If I was married to them, maybe, and if they had a cool relationship with my mom. But I know what it’s like to have a kid, and I know how shitty that feels, so no.

The next question was rather personal, which was even acknowledged by Zeni. “Kat, I know this is deep,” Zeni said, after which she asked, “When would you have gotten married if you weren’t expecting a child?”

Stickler replied she didn’t know, but she would have dated someone longer than a couple of months before deciding to share the wedding vows with him. “It would have been on my own terms,” she concluded.

Many young women get pregnant at a young age, and they consider abortion as a safe option. The same option was available for Stickler as well. And when Zeni asked Stickler if she had ever considered abortion, Stickler said yes.

Kat Stickler with her daughter, MK, in Halloween 2022 (Photo: Instagram)

“Yeah, I did. It was just not what I wanted in my life or what I had in my life plans. And I was just scared of what people would say, and it was for the wrong reasons. But I couldn’t do it, so yeah, I didn’t,” she answered.

And as the video continued, the two mothers answered several more questions, including how they felt after having their children, if it was hard to raise children at a young age, if people judged them for having kids at a young age, and so on.

Stickler and Zeni’s children also appeared in the video to cause cheerful distraction. “Cheers to motherhood and all the mamas out there. Cheers. Okay guys, I love you. Thanks for watching,” the TikTok star said to end her video.