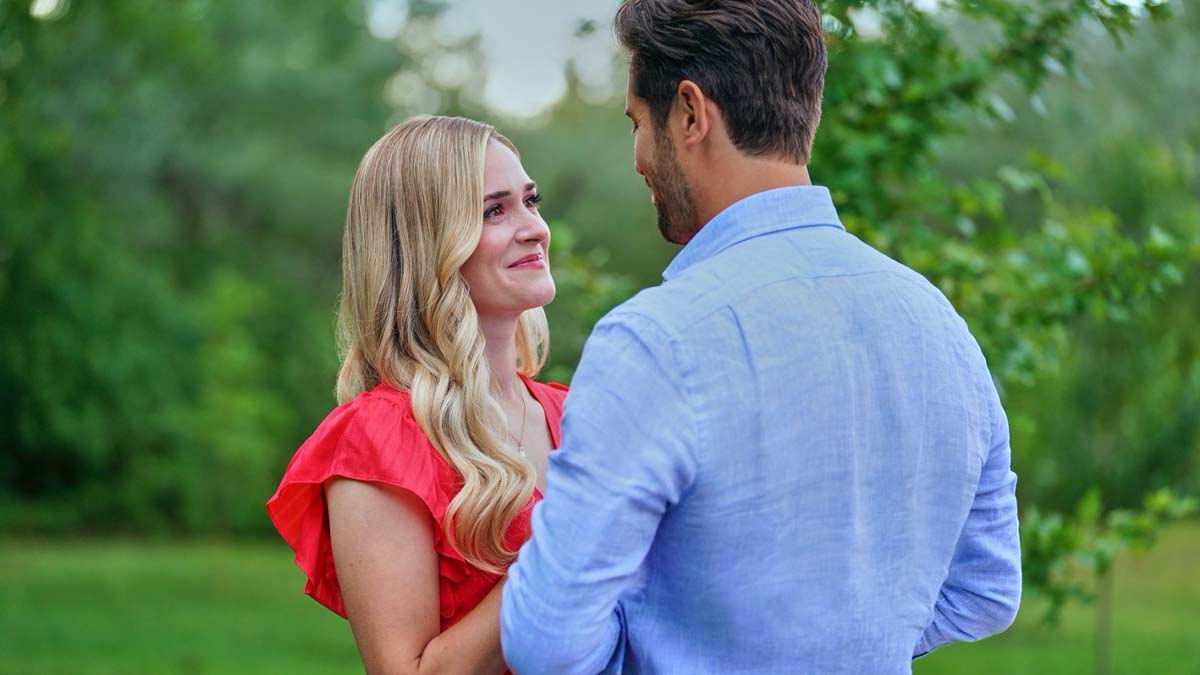 Brittany Bristow is back with another Hallmark movie.

The Canadian actress is currently making headlines for her amazing performances in yet another lovable Hallmark movie, A Tail of Love, a part of the channel’s Spring Into Love programming series.

A Tail of Love’s synopsis reads, “When Bella discovers funding for her dog rescue center is being discontinued, she turns to JR, a caring soldier who not only becomes attached to one of her beloved rescues, but also to her.”

The movie premiered on Hallmark Channel on Saturday, April 23, 2022. Till now, it has received thousands of positive reviews from viewers and critics as well.

During the watch-along, fans used the #ATailOfLove and started sharing their best moments from the movies as well as their views on the movie. Here are a few of those tweets!

One fan mentioned that the movie’s two stars became the Hallmark couple that they didn’t know they needed. “I’ll be melting in front of my TV. Beautiful Brittany Bristow, handsome Chris McNally, and cute puppies!”

Similarly, Hallmark Channel’s Twitter handle shared a moment from the show, as a gif, where JR starts developing a special bond with Indie, one of Bella’s rescue dogs. They also asked if he would adopt Indie later in the movie.

“I’m not crying, my eyes are just sweating. Oh Bella,” wrote one fan after seeing the movie. Hallmark Channel’s Twitter handle also had the same emotion as they retweeted the original tweet, saying, “I’m not crying! You’re crying!”

Additionally, one fan wrote, “I definitely close myself off because of this… I really appreciate this movie is digging deeper into negative emotions. It has the iconic @hallmarkchannel cheerful happiness but with more strong real feelings.”

Another heartwarming tweet came from Hallmark Channel’s Twitter handle as they shared a gif of Bella and JR having a conversation — JR was interested in building a relationship with Bella, whereas Bella deemed it best if they remained friends.

At the ending moments of the watch-along, Hallmark Channel’s Twitter handle posted another gif of Bella and JR kissing each other with a caption: “If you are ever lucky enough to find love, don’t ever let it go.”

Brittany Bristow on ‘A Tail of Love’

In an exclusive interview with ON TV Today, Bristow poured her views on A Tail of Love.

She was asked if she considers the movie a classic Hallmark movie as it incorporates elements such as rescued dogs and the military. In reply, she first mentioned that she was touched when she read the script.

“It’s such a beautiful story. We all have our different paths that we walk and our different challenges, but this has the common ground of people loving animals and the unconditional support you can get from an animal … and how that affect each and every one of us.”

The lead cast of Hallmark Channel’s ‘A Tail of Love’ (Photo: Instagram)

“It doesn’t matter who you are or what you do: As long as you love them, they’ll love you back,” she added.

As the interview went on, the interviewer asked the actress if she was an animal lover herself. Bristow answered with a yes and said that she had a dog growing up, which made a huge impact on her life.

She continued, “I just loved her with everything I had. When she died, I really felt like a part of my family was gone, and I still miss her. Animals are precious, and it’s up to us to protect them.”

In the end, the Toronto native was asked what she liked the most while working in Hallmark movies. She stated that Hallmark films are meant to make one’s heart swell with happiness no matter what the given movie is about — happiness is the main aim.

Furthermore, she added that the movies are to remind people that there is hope, love, moments for healing, and opportunities for joy. And whatever character she is playing, she loves to be a part of that.

The plot of ‘A Tail of Love’

Speaking more about A Tail of Love, the movie focuses on a dog rescue shelter that Bella runs alongside her grandmother named Lily.

As the story moves on, Bella and Lily get to know that their rescue shelter’s main sponsor, a dog food company, will be sold after the owner’s passing — resulting in their shelter’s funding in danger.

Following the death of the dog food company’s owner, the owner’s son, JR, takes a short leave from his duty as a soldier to attend the company’s sale. It’s there where he meets Bella and her new rescue dog Indie.

Hallmark Channel further explains the story, “While visiting the rescue, JR quickly bonds with Indie, a retired military dog, and continues to stop by to spend time with his new, four-legged friend.”

“When Bella learns that the rescue’s property is also being sold, she turns to JR for help in finding the missing document proving her grandparents purchased the land many years before.”

While doing all that, JR becomes close with Bella – and vice-versa – and they develop feelings for each other. “But JR’s upcoming return to active duty could put a halt to their budding romance.”