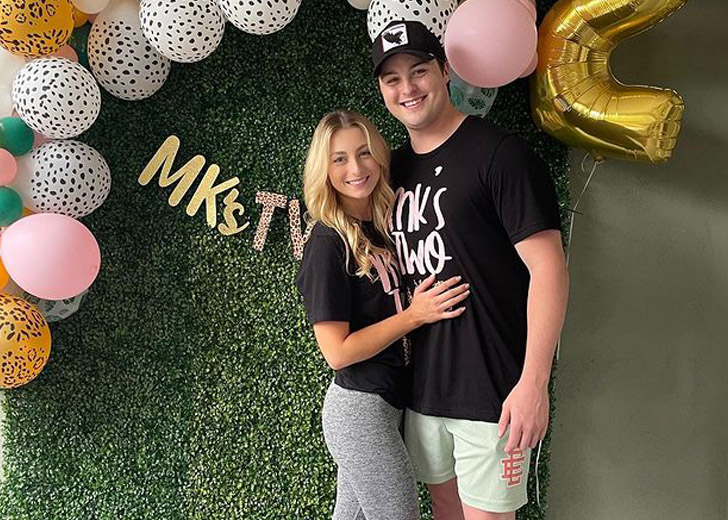 Michael Stickler, aka Mike, rose to fame through the TikTok content that he made alongside his now ex-wife, Kat Stickler, during the pandemic.

Following his divorce from Kat, citing “I need to work on in my own life and get in order,” he gave most of his focus toward building a successful career. He started his own podcast called Take A Lap, with two of his friends.

However, now it seems like he is ready to return back to dating. His recent Instagram posts hint that he has already found a new girlfriend.

Who Is Mike Stickler’s New Girlfriend?

Stickler’s new partner is Tia Alannah Borso, a registered nurse who has worked around in different hospitals, mainly children’s hospitals, of the United States.

Borso is presently 26 years of age. Born in 1995, she celebrates her birthday on the 15th of July every year. Her zodiac sign is Cancer.

Tia Borso alongside her pet in a boat (Photo: Instagram)

Besides these, there are not many details available about her. She isn’t much active on social media platforms and only shares pictures occasionally.

Stickler’s interaction on Borso’s Instagram first started on July 30, 2021, when the former first liked one of her Instagram posts. On the other hand, Stickler’s post of August 17, 2021, was the first time that Borso had liked it.

Going by that, it can be assumed that the two knew each other since mid-2021 and began dating sometime later.

On October 1, 2021, the registered nurse featured the podcast host for the first time on her Instagram handle. She had shared a couple of snaps from when they were in Chicago, Illinois. “A trip to the Windy City,” she captioned her post.

Stickler had gone to Chicago, Illinois to surprise his mother, who has been working in the frontlines as a nurse. And, it seems like he took Borso with him and she met with his mother too.

On October 18, Sticker also featured his girlfriend for the first time on his Instagram handle. He had posted several pictures from his and Borso’s trip to Traverse City, Michigan. He captioned the post, “Pictures do not do this weekend justice :)”

Later, Borso was in attendance during Stickler’s daughter MK’s (Mary-Katherine) – shares daughter with ex-wife Kat Sticker – 2nd birthday party. A couple of days later, on November 21, Borso herself posted some snaps from that day.

In those pictures, she was seen holding MK as they celebrated the baby girl’s birthday in a big fashion with family and close friends. “Today was beyond special,” she captioned her post.

On November 24, Stickler also shared some pictures from that day where Borso was also seen in attendance.

Three days later, on November 27, the former music teacher shared a picture with his beau. The atmosphere of the picture hinted that they had a little dinner date in their house. There was a bottle of wine, dining plates, and the candles were lit.

Recently, on December 8, the nurse took to her Instagram stories to share some cute moments that she shared with Stickler’s daughter. One story was of MK doing sledding on snow whereas another story was of her holding MK as Sticker took a selfie.

Going by all of those, it certainly seems like Stickler has found a partner who not only loves him but equally loves and cares for his daughter.