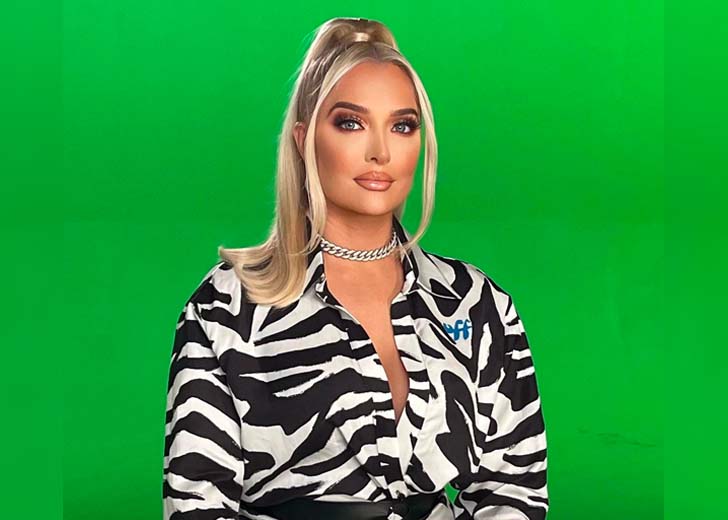 Erika Jayne, with her ex-husband, filed a lawsuit for embezzling millions of funds.

She got more fame when she joined the cast of The Real Housewives of Beverly Hills for the sixth season in 2015. She has a young son, Tommy Zizzo, with whom she is close.

Read along to find more details on the mother-son relationship, her personal life, and more.

Erika Jayne has a son with her first husband

Tommy, unlike his mother, lives a relatively secluded life owing to his professional activity. Nonetheless, he supports his mother’s childhood ambition of working in the entertainment sector.

Tommy is her first and only child with her ex-husband, Thomas Zizzo. Jayne met Thomas while residing in New York when he was working as a DJ at a Manhattan bar.

The pair married in St. Patrick’s Cathedral in December 1991. She gave birth to a son, Thomas, shortly after. She moved to Los Angeles when her marriage ended in 1996.

Tommy is a Police officer, and the reality star is very proud of her son. “I’m very proud of my son being in law enforcement, but obviously it can become a bit nerve-racking,” she told the Daily Dish in 2016.

“It’s a dangerous profession,” she continued. “I’ve known my son was going to be in law enforcement from the time he could walk and talk. That’s all he’s ever wanted and that’s kind of your role as a parent is to honor who your children really are.”

Even though Tommy lives a very private life because of his profession, Jayne never holds back to prise or talks about her adult son. She often takes to her Instagram, other social media, and interviews to post or talk about her only child.

“I mean, we speak to each other. Yes, we are friends. He’s grown. I am and will forever be his mother. And, you know, I still have to cook when he comes over,” she laughed.

She expressed that when he comes over to see his mother, he makes himself at home. “He’s like, ‘Can I take a shower?’ ‘Yes, you may take a shower.’ But it’s nice, too, for him to be grown.” The actress shared this in a recent interview with Bravo TV.

The singer married again after her divorce from her first husband. After meeting in 1998, she married Thomas Girardi, a well-known plaintiff’s attorney and founding partner of Girardi & Keese in Downtown Los Angeles, in January 2000.

But her second marriage didn’t work out either, and within 10 months of marriage, she announced her separation from Girardi and filed for divorce in November 2020.

One month after their divorce was announced, the pair was implicated in a lawsuit for allegedly stealing and embezzling funds intended for the relatives of the victims of the catastrophic Lion Air plane accident in 2018.

The media reported the divorce might be a “sham” to conceal riches. Jayne eventually scored a win against the lawsuit on August 31, 2021, as there was no evidence to prove her guilty of the alleged fraud.

When asked if she is close to her only child’s father, Jayne, 50, exclaimed, “Yes, actually, I am!” in an interview with Bravo’s The Daily Dish on Tuesday.”

According to the reality star, Thomas has been “extremely supportive, honestly, throughout the entire process” of her ongoing legal and financial issues with her former husband, Tom Girardi.

Jayne also stated that her public problems had enhanced her bond with her son. “My son’s been amazing,” she said, “My son and I, we’ve really come together. … He’ll be 30 in June. Jesus. I just remember walking around here in New York being pregnant with him, but he’ll be 30. And so asking him what he thinks about things, you know, you get this adult perspective, and it’s really nice.”