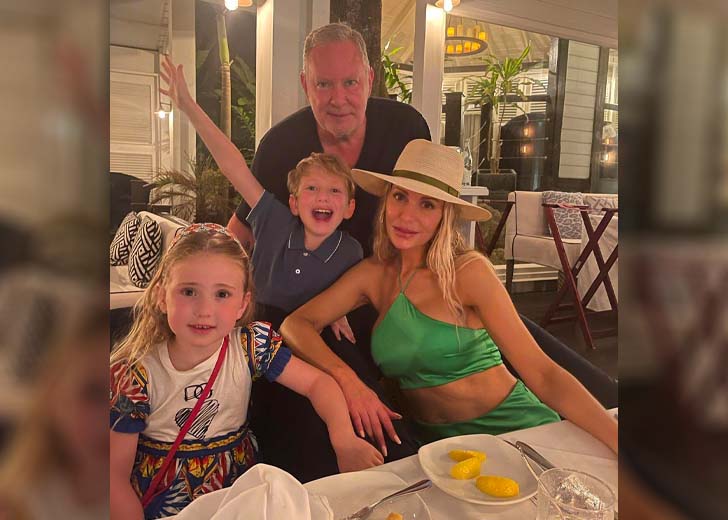 Dorit Kemsley likes talking with her kids like adults.

Dorit Kemsley is an American fashion designer and television personality. She is well-known for her role as a regular on Bravo TV’s The Real Housewives of Beverly Hills.

She is a cast member of The Real Housewives of Beverly Hills, which she joined in 2016, and has subsequently played a main character for six seasons. Dorit and her husband featured as guests on Million Dollar Listing Los Angeles in 2019 when they offered their property for sale.

Dorit has shown fans how trendy she is since joining the Real Housewives of Beverly Hills in season 6 and continues to be part of the famous show. But other than her trends and fashion, she has also won the hearts of many fans by being a loving mother.

Dorit Kemsley has two children with her husband, PK

Dorit is married to Paul “PK” Kemsley, with whom she has two children, Phoenix, 5 years old, and Jagger, 7 years old. The pair owns a 9,000-square-foot property in Encino, California, which they paid $6.47 million for.

Since fans and viewers first saw Dorit of RHOBH several years ago, it’s been evident that family comes first to her. That means she’s always seeking reasons to brag about her two children and husband, Paul.

During a recent interview with Bravo Insider, Dorit was clearly beaming with pride when she offered an update on her children’s growth and activities.

“They’re still little munchkins, but Phoenix was just a few months old and they’ve grown up with it, so the audience has obviously seen them grow,” she shared with the interviewer.

“And now they’re so fun and, you know, we’re able to play and they’re little people with big personalities and they’re funny and smart, and such a joy. They’re doing really well.”

Dorit Kemsley talks to her kids like they are little adults

As BravoTV expressed, Phoenix, 5, and Jagger, 7, are like tiny versions of Dorit and PK in terms of personality. Dorit concurred, saying, “I definitely think that they’re a nice combination of the two of us, for sure.”

The 46-years-old reality star cannot stop talking about her adorable kids. She believes that her kids should be able to express themselves.

“I mean, I encouraged them to have their individuality, and I’ve always spoken to them like little adults. There’s certain values that are really important, family being one of them, and manners,” she shared.

Dorit shared a photo of her children’s first day of school on Instagram on September 8. The kids can be seen smiling and appearing so grown up while standing with back-to-school placards honoring the start of a new year in the adorable photographs.

Dorit Kemsley is of Jewish descent

The fashion Designer was born to Jewish parents in Woodbridge, Connecticut, on July 14, 1976. Her father, Shalom Lemel, is Israeli, and her mother, Rachel, is Moroccan.

She traveled around Europe after graduating from Quinnipiac University with a degree in design, marketing, and communication. Finally, She settled in Italy, where she spent ten years working for a multinational swimwear firm.

Later, Dorit created the Beverly Beach swimsuit brand and the Nektaria bridal collection, establishing her own swimwear and bridal-dresses lines.

Kris Collins AKA Kallmekris' Break up with Boyfriend Aaron Brown

Posted on August 23, 2022August 23, 2022
James Majoos has not shared any of his personal information, including his age.
Read More