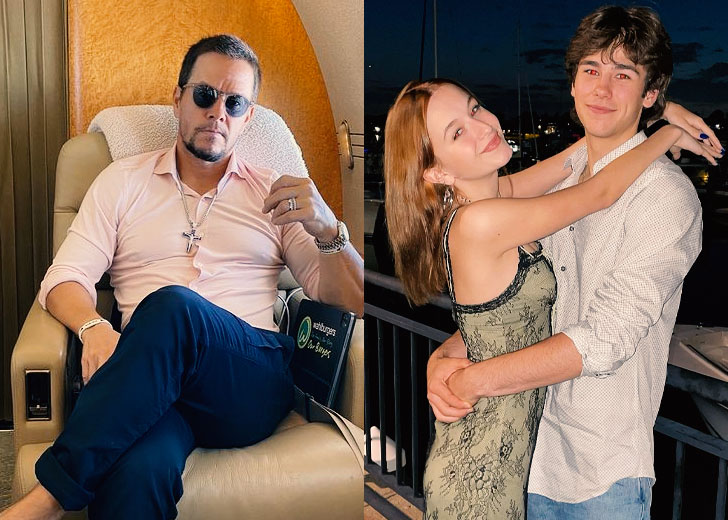 Ella Rae Wahlberg is a celebrity family member who gained the limelight as the eldest daughter of actor Mark Wahlberg and his longtime wife, Rhea Durham.

As the daughter of a renowned actor, it’s evident for people to be eager to learn more about her, including her personal life. So here is a look at Ella’s love life and more!

Who is Ella Rae Wahlberg dating?

The 18-year-old Ella is presently in a romantic relationship with her boyfriend named James.

Although it’s unknown when and how the love birds got connected, they officially began dating each other on January 24, 2021. Since then, Ella and James have always been together.

However, as Ella prefers privacy over her love life, she doesn’t share much about it. Additionally, her Instagram handle is also private so that only friends, family, and other people that know her closely can see its contents.

Although less is known about her relationship with James, it could easily be said that they have a healthy relationship. It is so because her father, Mark, has high praises for his daughter’s boyfriend.

Besides, he has even featured him on his Instagram handle a couple of times. And it seems like he really likes him. For instance, on January 8, 2022, Mark shared a short clip in which he was seen in a gym with James.

In the short video, Mark said, “I used to work out to keep the boys away from my girls, and now I’m working out with the boyfriend. Imagine that.” The actor and James were even wearing matching t-shirts.

Those lines from him easily say that he trusts James. But that’s not it as he had more praise for James in the caption, where he had written, “Ella is a lucky girl and I’m a lucky dad! He is a great young man.”

Most recently, on January 24, 2022, the father of four took to his Instagram handle to share a sweet picture of his daughter and her boyfriend to congratulate them on their one year of togetherness.

In the caption, he first wished the couple on their first dating anniversary and then mentioned that he was very happy for them. “I couldn’t be more proud of you Ella!! I love you guys,” he further added.

On Thursday, February 17, 2022, Mark made an appearance on The Ellen DeGeneres Show to promote his upcoming movie, Uncharted, alongside Tom Holland and other stars.

During that segment, he opened up about his eldest daughter Ella’s present boyfriend, James, and how well he gets along with him. He also said he is more worried about James than for Ella, which is “tough.”

“I think he’s more scared of my daughter than he is of me. I pray more for him than I pray for her [Ella] in that relationship.”

As he went on, he mentioned that Ella and James are perfect for each other, and he “couldn’t be any sweeter.”

Mark also talked about how he realized it’s inevitable that his children are growing up and starting dating. “I realized early on that it’s inevitable. As long as it’s somebody who’s nice and treats her well, and somebody that I can trust and respect,” he added.

He further said that he has a great relationship with James, and he is fantastic. “I hope she can keep him!” he concluded.

In the end, the actor shared that James stayed with his family for an additional one week after the holiday break. During that time, he and James worked out and did many things together.

Continuing his sentence, he said, “He’s a very good influence on her. He’s such a sweet guy. He has lots of interest that we have in common.”

Going by all that, it sure seems like Mark has given his stamp of approval to James.

Before her relationship with her current boyfriend, Ella seems to have a couple of relationships, or so it seems based on what her father has mentioned.

During his June 2017 appearance on The Graham Norton Show, Mark explained that he has to keep a close eye on Ella and who she spends time with as she has started dating and he is nervous.

He stated that Ella was briefly in a relationship with a boy “who wasn’t a nice boy.” As he went on, he said that when Ella told him she had a boyfriend, he said to her, “You can hang out with him in a safe environment.”

Of course, by that, he meant she could spend time with the boy, but he will also be there. Ella agreed, but much to Mark’s surprise, the boy “one-upped” him and brought his mother alongside him.

He said, “He comes over and he one-ups me — he brings his mom!” Later, Mark’s perspective of the boy being “not a good kid” changed when he said something to Ella when she was steamrolling Mark.

“The genius thing is he was so sweet and [my daughter] is like steamrolling me all the time and he’s seeing it, like she’s being rude to me and she’s being mean to me and [he’s] like, ‘If you’re not nice to [your dad], he may not want to be around you.'”

After hearing that, Mark changed his opinion of the boy and called him “a keeper.” “But I don’t know if she can hold him down,” he further added.

Later that year, in November, Mark made his appearance in Live with Kelly and Ryan. He said that Ella once brought a young boy to dinner — with his mother — but he never saw him following that night.

He said, “It was one of those things where I was like, ‘Oh, this boy is really nice,’ and now he’s not around anymore — I don’t know what happened. But I was not trying to intimidate him. It had nothing to do with me. I guess the relationship just didn’t work out, and somehow I got blamed.”

As he continued, he said, “It’s inevitable — at some point, it’s gonna happen. I wanna know who she’s gonna be hanging out with, what his parents are like, all that stuff.”

Then the host, Kelly, asked Mark, “A boy would be terrified of you, wouldn’t he?” The actor replied by saying, “I would think so.”