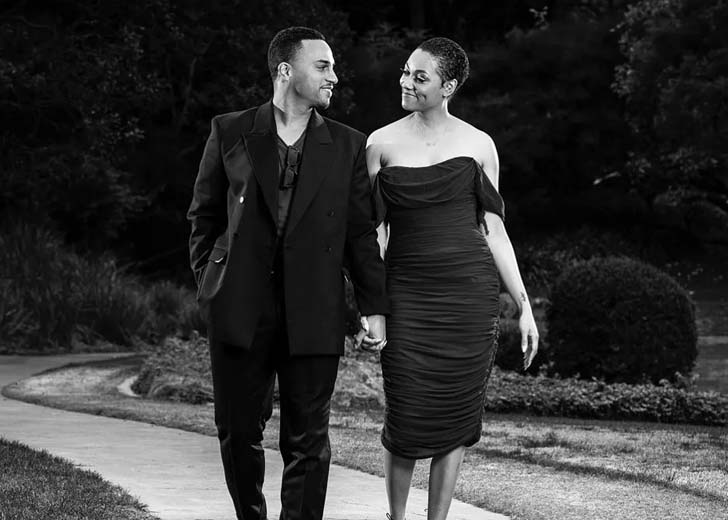 Congratulations to the newlyweds!

Bria Murphy has been off the market for a while, and now she is a happily married wife.

The daughter of American actor Eddie Murphy recently tied the knots with her longtime fiance Michael Xavier. The wedding took place on Saturday, July 9, 2022, in a private ceremony in Beverly Hills, California.

The intimate afternoon ceremony was witnessed by 250 guests, including family members and close friends, per People Magazine. Bria’s father walked her down the aisle, and the ceremony was followed up by a wedding party.

On the other hand, the groom looked dashing in a Knot Standard tuxedo, which was styled by Dion Lattimore. Several pictures from their wedding were shared by People Magazine, in which the newlyweds looked amazing.

Bria Murphy with her husband, Michael Xavier, and her parents at her wedding (Photo: John Solano Photography)

The couple announced their engagement last year via their respective Instagram handles. On December 30, 2021, Bria shared multiple pictures with her partner as she flaunted her engagement ring. “My heart, my best friend, my forever. I love you, always,” she wrote.

In another follow-up post, she posted another series of pictures and stated that she could not wait to marry Xavier. Similarly, Xavier did the same and kept his caption simple by writing, “Forever my love,” with a heart and ring emoji attached.

Before announcing their engagement, Bria and Xavier kept their relationship private and rarely shared any details of their togetherness.

Who is Bria Murphy’s husband?

Murphy’s husband, Michael Xavier, is an actor who hails from Ottawa, Ontario, Canada. Born on November 20, 1985, he is currently 36 years of age, making him four years older than his wife.

Xavier was raised as the middle child of five, meaning he has two older and two younger siblings. However, as he has always kept his family life away from his limelight, there is no information about his parents and siblings.

Coming over to his education, he joined a high school located in his hometown. After that, he enrolled at Toronto-based Humber College, where he embarked on his journey to becoming an actor. While there, he participated in several theatre productions and enhanced his skills.

A look into Michael Xavier’s acting career and net worth

The 6 feet or 1.83 meters tall actor has appeared in multiple movies and TV shows that have brought him fame. Some of them are The Best Years, 88, Bitten, A Swingers Weekend, Northern Rescue, Shazam!, and The Expanse.

Recently, Xavier has been making a mark through his performances in a couple of Hallmark Channel movies, including Be My Valentine, Christmas Comes Twice, and A Christmas Treasure.

Additionally, some of his recent appearances were mostly in TV movies such as The Clark Sisters: First Ladies of Gospel, Tempted by Danger, Christmas on Wheels, Letters to Satan Claus, A Christmas Mission, Beware of the Midwife, and Don’t Hang Up.

The Canadian actor made his acting debut in the 2008 movie titled Make It Happen, where he portrayed the role of Marcus. Since then, he has appeared in many acting projects. And as of this writing, he has appeared in 42 movies and TV shows, including his upcoming film A Hundred Lies.