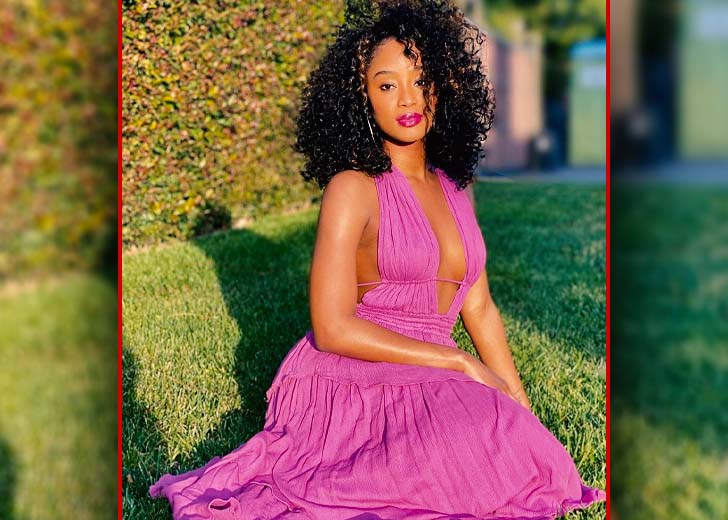 Pepi Sonuga is a talented Nigerian-American actress who recently made her appearance as Melanie in the Hulu television show Pam & Tommy. In it, she shared the screen alongside Sebastian Stan, Lily James, Fred Hechinger, and others.

In addition, she has garnered healthy limelight for her performances in movies and TV shows such as General Hospital, The Fosters, Ash vs Evil Dead, Under the Silver Lake, Famous in Love, Leprechaun Returns, 9-1-1, and Queens.

While her professional life remains known to the world, her family life is somewhat under the wraps. Read on as we discover more about her parents, siblings, ethnicity, age, and more!

Who are Pepi Sonuga’s parents?

As of this writing, not much information is about Sonuga’s parents – specifically their names. It’s because the actress prefers to keep those details upto herself only.

However, besides their names, there are a few details that she has shared about her family. In her interviews, Sonuga has freely mentioned that her parents were from different tribes.

Her father was of the Yoruba tribe, and her mother was of the Igbo tribe. As they were from rival tribes, the people of their community didn’t accept their relationship. However, their love was stronger, and they eventually shared the wedding vows.

But, their marriage was taken as an act of rebellion from their respective communities. As a result, they ultimately had to sign divorce papers and walk down separate paths.

Pepi Sonuga moved to Los Angeles with her mother

Ever since Sonuga – who doesn’t seem to have any siblings – was nine years of age, she dreamt of making it big and appearing on the big screens.

Taking the same dream with her, she moved from her birthplace to Los Angeles, California, with her mother – after her parent’s divorce – at the age of 10. Though she had made it to the United States, the transition was difficult.

Speaking of the transition, she told Screen Radar, “It was hard to adjust. I didn’t really know much about America, and I obviously had a very thick accent. I found it hard as far as being bullied.”

“My accent was definitely something I tried to get rid of when I was in middle school. I just wanted to fit in. I didn’t want anyone to know that I wasn’t like them,” Sonuga further added.

One year later, she made her acting debut via a short movie titled Weigh Money. But, she took a break for around four years. In 2013, she made her big-screen debut when she played the role of Michelle in the movie Life of a King.

Since then, she has been very much active in the acting sector and landed roles that have given her the fame she currently has. With all the success she has achieved, Sonuga still has one ultimate goal – to play the role of Queen Nefertiti, one of Africa’s powerful rulers in history.

In the same interview with Screen Radar, the actress opened up that the decision to move to the United States was hard, but her parents understood its benefits and were always supportive of her dreams.

She said, “My parent have always been supportive. Because as an African in America, it’s important to get an education, and take advantage of the resources this new world has to offer.”

She continued, “I always joke that my mom was heaven, because she wanted this just as bad as I wanted this. I don’t think she took it serious until I had an audition and the casting director said [to her mother] ‘you need to take this seriously because I think your daughter is going to go far.'”

Born in 1993 in Lagos, Nigeria, Sonuga is presently 28 years of age. She celebrates her birthday every year on September 8. Her birth name is Stephanie Sonuga, and her zodiac sign is Virgo.

As her parents are from different tribes, she comes from two different ethnic backgrounds and thus has mixed ethnicity. Additionally, her nationality is Nigerian.

Furthermore, she stands at an average height of 5 feet 5 inches (1.65 meters). Talking about her academics, she attended the California-based Culver City High School. During her time there, she studied theater arts, improvisation, and scriptwriting.