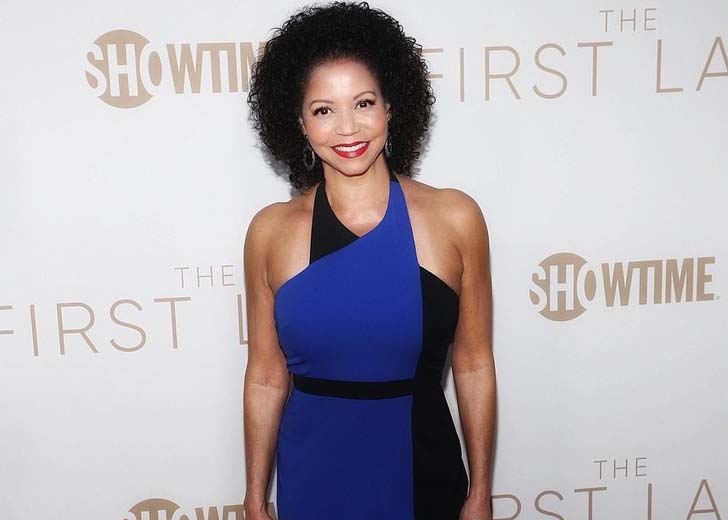 Gloria Reuben is a well-known Canadian-American actress who is presently starring in two TV shows — The First Lady and City on a Hill. In addition, she recently appeared in two movies: Firestarter and Hallmark’s A Second Chance at Love.

Some of the movies and TV shows that gained her popularity include Cold Blooded, The Agency, ER, Raising the Bar, Lincoln, Admission, Falling Skies, Reasonable Doubt, Saints & Sinners, Cloak & Dagger, and Mr. Robot.

In the NBC show ER, she played the role of Jeanie Boulet in 103 episodes. Likewise, for her performance, she won seven awards at multiple awards shows and was nominated for one Golden Globe Award and two Primetime Emmy Awards.

Who are Gloria Reuben’s parents?

Born on June 9, 1964, as Gloria Elizabeth Reuben, the actress was raised in the suburbs of Toronto, Ontario. She is presently 57 years of age.

Her father’s name is Cyril George Reuben, and her mother’s name is Pearl Avis (Mills). As per reports, her father was an architect/engineer by profession, whereas her mother was a gospel/classical singer.

Additionally, it is reported that both of her parents are Jamaican-born. But, her father was mostly of Jewish heritage – with Ashkenazi and Sephardi roots – and some African ancestry. As for her mother, she is mostly of African descent.

When Gloria was 12, her father passed away, leaving the family responsibilities in the hands of her mother. However, the actress didn’t have a very strong bond with her father; instead, it could be said that she resented him.

In her Instagram post of June 20, 2020, Gloria revealed some secrets and gave some insight into her relationship with her late father. The occasion was Father’s Day, and the actress had shared an old picture of her sitting on her late father’s lap.

In her caption, she first stated that it was the first time she had ever posted anything on Father’s Day. “Here I am. On my second birthday, sitting on my father’s lap. Yeah, that’s right. The man in this photo is my father,” she described the picture she posted.

Gloria Reuben with her father, Cyril George Reuben, when she was two (Photo: Instagram)

As Gloria continued, she mentioned that her father was “35 years older” than her mother and that the family with her biological mother was her father’s “second family.” “I’ve held a lot of shame about my father being an old white man.”

“And a lot of resentment towards him. Needless to say those feelings and my relationship with him (that I can barely remember as he died when I was 12) have shaped and affected all of my personal/intimate relationships, and have led to much internal conflict in my life.”

“And that conflict has arisen in today’s times. Yet my inner conflict and confusion are healing. Slowly. Steadily. Sweetly.,” she concluded her caption.

Reuben had a younger brother named David Reuben from her biological parents’ side. Additionally, she had an older half-brother named Denis Simpson, an actor and children’s TV host. Besides them, it’s reported that she has three other siblings – whose identity isn’t disclosed.

An old picture of Gloria Reuben with her brother David Reuben (Photo: Instagram)

The actress lost her biological brother just shy of his 22nd birthday — he took his own life at 21. Then, around two decades later, on October 22, 2010, she had to go through the death of her older half-brother, Denis — he died of a brain hemorrhage just two weeks shy of his 60th birthday.

Gloria documented the life of her two late brothers and her family life in her memoir, My Brothers’ Keeper, which was published in November 2019. The actress has mentioned that her book is a tribute to her late brothers.

On the seventh page of her book, she mentioned that if she could go back in time, she would go back to when she was six and her brother, David, was four. “I would take his little hand and walk with him to the field that surrounded the elementary school we attended,” she had written.

“We would run free and play. Laugh and roll on the grass. Gaze at the clouds, finding our favorite cartoon characters sketched throughout them. And as the sun began to dip, I would take his hand yet again and lead him home. He would be fed and bathed.”

“And I would tuck him in, telling him over and over again that I loved him more than anything else in the world. Those would be the last words he would hear as he drifted into the land of dreams.”

On Page 29, she talked about how both of her brothers would often visit her in her dreams. “When I dream of David or Denis, it’s as if no time passes between that moment upon waking and realizing that the experience did not actually happen and having seen them in the waking world so many years ago.”

Furthermore, on Page 102, she described the moment she shared with her half-brother, Denis, in 1987. She wrote, “It was right around that time when I moved into the house that Denis owned and lived in, in Toronto.”

“And that’s when I witnessed all of the wonderful qualities he had. That was the beginning of experiencing his loving soul in person on a day-to-day basis. That was the time when his gracious, gorgeous, generous spirit offered me the mind-altering opportunity to experience life in the opposite way of how I grew up.”

She stated that those were the happiest years of her life. Gloria still misses her brothers as much as she did back then and often shares the cherished moments she had with them.

Posted on February 13, 2022February 13, 2022
Netflix comedy-drama series The Baby-Sitters Club (The BSC) has managed to gain widespread fame and attract viewers from all around the world. Perhaps that’s...
Read More