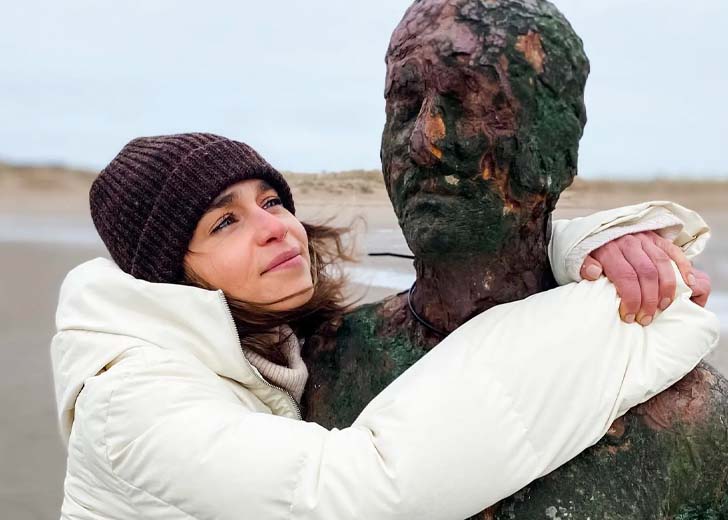 Emilia Clarke is not married and does not have a husband but she has been linked to a lot of men.

Emilia Clarke has been linked to many people. With some, she has been rumored to be dating.

On the other hand, it has been speculated numerous times that she was married.

To date, Clarke has never explicitly confirmed if she has a boyfriend or a husband. However, she has denied that she was not married a couple of times.

Regardless, the Game of Thrones star has dated a couple of people in the entertainment industry and has even sworn that she would stop dating actors at one point.

Here is everything we know about Clarke’s dating life.

As of 2022, Clarke is single and has no boyfriend or husband. At least, she has not revealed if she is dating or married.

It is reported that she once tried online dating and used an app called Raya. Raya is an exclusive dating app, often dubbed as the app for celebrities to find romance.

The actress went there with a portfolio of lovely images of herself, hoping to meet the love of her life. However, she deleted her profile from the app, perhaps realizing that online dating was not for her.

Until 2020, Clarke had an active love life with being linked to an array of men. Here is everyone she has been linked with.

Both Clarke and Jason Momoa rose to fame with the help of the fantasy drama Game of Thrones. Clarke played the role of Khaleesi Daenerys Targaryen, whereas Momoa portrayed her husband, Khal Drogo.

The pair hung out both on set and outside. As a result, many speculated that their on-screen romance traveled off-screen and that the couple was dating.

Unfortunately, that was never the case. Clarke and Momoa are good friends and never cross the boundary of friendship.

To date, they hang out together and often post pictures on their social media.

The two appeared happy in public, but after a few months, they remained silent about their personal lives.

Because she was filming Game of Thrones in Europe while Seth was in the United States, their long-distance romance didn’t work out, and the couple split up in 2013.

The actress spoke about their relationship with MacFarlane in April 2016 with Glamour. She opened up about the disadvantages of being in a relationship in the public eye and how strangers gave her love advice.

Well, a con is you have strangers giving you love-life advice like, ‘I’m a big fan of the show, and I’m not sure what you’re doing with that guy,’ which I didn’t react well to. That happened in New York when Seth and I were together. This guy started to give me advice: ‘Can I get a selfie? And by the way…’ Uh-uh, bro.

In 2015, Clarke dated her Terminator Genisys co-star, Jai Courtney. The pair met on the movie set and hit it right off.

However, their relationship did not last long. When they started dating, it was not confirmed; but Courtney revealed the pair broke up.

According to Creeto, the actor opened up about dating Clarke on a radio show and confirmed that they parted ways. He said, “No, I don’t… Your research is like three months old.”

Clarke was linked with director Charlie McDowell in 2018. It started after the actress posted a photo of herself kissing an unnamed person on the beach, which sparked suspicions.

Her fans and followers started speculating about how she was dating since the mysterious man’s identity was not revealed in the cryptic Instagram post.

However, McDowell verified it by sharing the identical photo on his account. He took down the post, but it was evident that he and Clarke were in a relationship.

More Instagram interactions followed after that, but by March 2019, they had dwindled.

Matt Smith was rumored to be Clarke’s boyfriend in September 2020 based on a smattering of evidence.

They were pictured together, and that was pretty much all. Nonetheless, Twitter leaped to conclusions and speculated the pair were in a relationship.

Neither Clarke nor Smith made any comments about their rumored relationship.

Who Is Odessa A’zion Dating? Know Her Boyfriend and Family