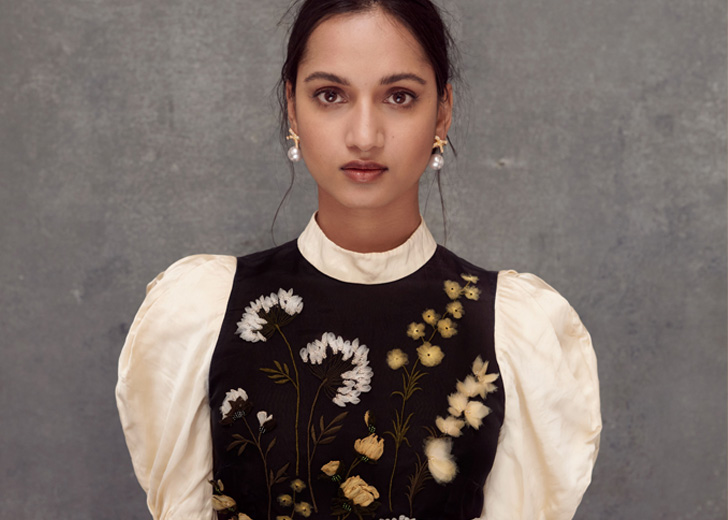 Amita Suman is an aspiring actress who is most popular for her role in the Netflix series Shadow and Bone. The actress has received praise for her portrayal of the member of the Crows Inej Ghafa.

Amita Is a Nepal-Born Actress

Amita Suman was born on July 19, 1997, in Birgunj, Nepal, making her 23-year-old presently. Her mother language is Nepali and Bhojpuri.

Speaking with Grazia magazine in April 2021, she described her early days in Nepal. “I grew up in a clay house in a small village there,” she said. “My days were filled with adventures – looking for fresh mangoes or being chased by cows, eagles, and finding king cobras chilling out in our roofs made of hay.”

The actress also opened about the significance of her first language, Bhojpuri, stating it has a “considerable oral narrative tradition” despite hardly having “any written literature.”

In 2004, at the age of 7, Amita emigrated to Brighton, England with her family. She studied at Sussex Downs College and later trained at the Academy of Live and Recorded Arts. She graduated in 2018.

She Is Close to Her Family

Amita seems to be very close to her family, even though she has not revealed their details publicly yet. The actress often shares pictures with her family on her Instagram.

On July 24, 2019, she even posted pictures of her birthday celebration that weekend with her family. The pictures with her parents and sister were snapped outdoors at the Royal Botanic Gardens, Kew, in London.

The Shadow and Bone actress also shared a snap of her grandparents on February 2, 2020, through Instagram, who lives in a village in Nepal.

Amita Was Dating a Boyfriend

Like her family details, Amita has not revealed her relationship details. However, she was definitely dating and had a boyfriend.

She revealed her boyfriend’s picture through Instagram on September 7, 2019. In the picture, her boyfriend is kissing her on her forehead with a sunny and greenery in the backdrop.

“How are there no comments on this adorable picture,” one fangirl commented. Replying to her, another user sarcastically wrote, “@haripriya.dz I think because nobody wanna say anything seeing a man kissing her! All dreams broken.”

Moreover, it is unknown if she is still dating the same man, secretly married to a husband or staying single currently.

How Tall Is Amita Suman?

The Doctor Who star, Amita Suman, is a young and energetic actress. She stands at the height of 5 feet 5 inches (1.65 meters).

‘Shadow and Bone’ Was Her Breakthrough Project

It wouldn’t be wrong to state that Amita’s role as Inej Ghafa in the Netflix series Shadow and Bone was one of her career’s breakthrough roles.

The actress made her screen debut in the year 2018. Her debut role was in the British drama series Casualty as Nina Biswas. Following that, she appeared in Ackley Bridge, Doctor Who, and Daughter.

In 2019, she had a recurring role as Naya in The CW series The Outpost. The same year in October, Amita was announced as the cast of Netflix series Shadow and Bone, an adaptation of the fantasy book series ‘The Grisha Trilogy and the Six of Crows Duology’ by Leigh Bardugo.

Amita as Inej Ghafa in ‘Shadow and Bone’

In the series Shadow and Bone, Amita as Inej Ghafa is a strong-minded and loyal spy, who works with the gang member of the Crows. She travels to Ravka along with Kaz and Jesper to capture the Sun Saint.

But during the journey, Inej discovers that her beliefs contradict the mission and acts accordingly.

Speaking about her role with Bustle magazine in April 2021, she shared that she went through the book [on which the series is based] and fell in love with her character.

“After my first take I bought the book, and finished it within a day,” she said. “I wholeheartedly fell in love with Inej. Then I researched the fans, and it’s such a strong and beautiful fan base, so I felt an immense pressure to do her justice.”