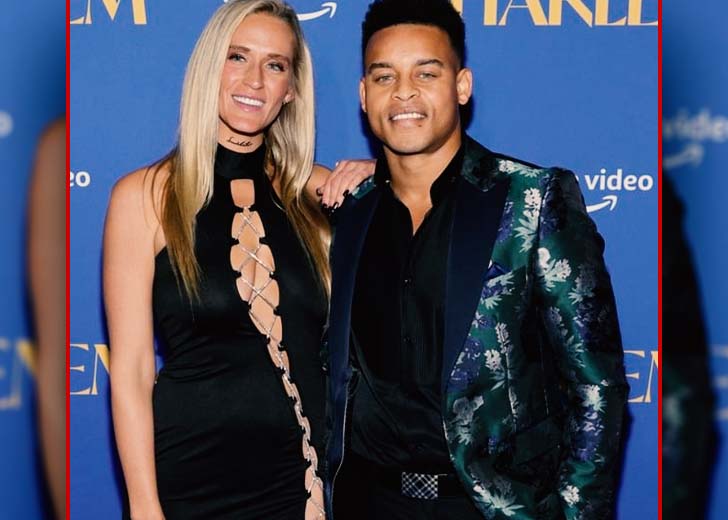 Robert Ri’chard, whose birth name is Robert Andrew Ri’chard, is a talented American actor. He has won the hearts of audiences through his performances in movies and TV shows such as Cousin Skeeter, House of Wax, One on One, Chocolate City: Vegas Strip, and others.

Due to his ever-growing popularity, people have been keen to know more about him, especially if anyone in his life has won his heart. So, is the actor married to a wife or has a girlfriend?

Does Robert Ri’chard have a wife?

As of this writing, there have been no reports of the Daytime Emmy Award winner sharing the wedding vows and having a wife. So, it’s fair to say that Ri’chard doesn’t have a wife.

Although he might not have a wife, he does have a special someone in his life. The Vampire Diaries actor presently relishes a romantic relationship with his long-time girlfriend, Meg Ellspermann.

Ellspermann told PopFuzion TV in 2020 that she found Ri’chard injured in the gym, and she put on some of the medicinal product she had on him. “He was able to walk the next day, and I was able to help transform him, transform his suffering, and the rest is history,” she added.

Even though they might have been dating each other for a long time, the actor only introduced his girlfriend during 2018’s Valentine’s Day. On the other hand, Ellspermann had featured Ri’chard alongside her friends a couple of times before that.

Since then, the duo has always been together and relishing every moment they share. Both of them could be seen going on vacations to different places and sharing multiple pictures alongside each other via their respective Instagram handles.

Most recently, on February 7, 2022, Ellspermann shared a couple of snaps from her and Ri’chard’s trip to Mammoth Mountain with their actor friend, Ron J. Rock.

Going by all that, it seems like the couple is grateful to have each other in their lives. Well, Ellspermann is for sure, as mentioned in her Instagram post of January 7, 2020, where she regarded Ri’chard as the best gift God has ever given her.

Who is Robert Ri’chard’s girlfriend?

While Ri’chard has gained success by contributing to the acting industry, his partner has earned fame through her contribution to the medical field.

As per Ellspermann’s Instagram bio, she is a sports massage specialist, microbiologist, and a competitive boxer. Additionally, she is the founder of ELITE | PERFORMANCE | MEDIXINE (EPM), a medicinal product that manufactures oil products to alleviate pain and other purposes.

As per her interview with PopFuzion TV, she first got the idea of creating the EPM product as she often got injured during her boxing matches. And as she was also a microbiologist, it helped her a lot in making it.

Interestingly, when she found her now-boyfriend injured in a boxing gym, she applied the same product to him – that paved the way for them to connect to each other, and now they are together for years.

Before Ri’chard began dating his present girlfriend, he was in a couple of relationships in the past.

His first known relationship was with an American actress and musician named Kyla Pratt. They first met each other during the sets of the show, One on One, and eventually began dating in around 2003.

However, their togetherness didn’t last for long as they separated just one year later, in 2004. After that, in 2014, Ri’chard was linked to his Chocolate City co-star Vivica A. Fox. Although the two played the roles of mother and son in the movie, they were together in real life.

A collage picture of Robert Ri’chard and Vivica A. Fox (Photo: Gary With Da Tea)

At that time, a production insider had told DailyMail, “Oddly enough, despite the fact that she was playing his mother, they had this magnetic chemistry. It was something about the way he looked at her that started people on the set chatting about something going on.”

“He always wanted to be around her. He kept finding ways to creep off to her trailer and they were always having to send a production assistant to go get him to come back and shoot scenes,” the insider further added.

Even after the movie’s filming had wrapped up, they continued to hang out together and have dinners in Los Angeles. But, the romance between the two sparked quite the controversy as there was a huge age difference — Fox was around 20 years older than Ri’chard.

However, the talks eventually settled down as it became known that they are no longer together after the actor introduced his present girlfriend, Ellspermann, on 2018’s Valentine’s Day.