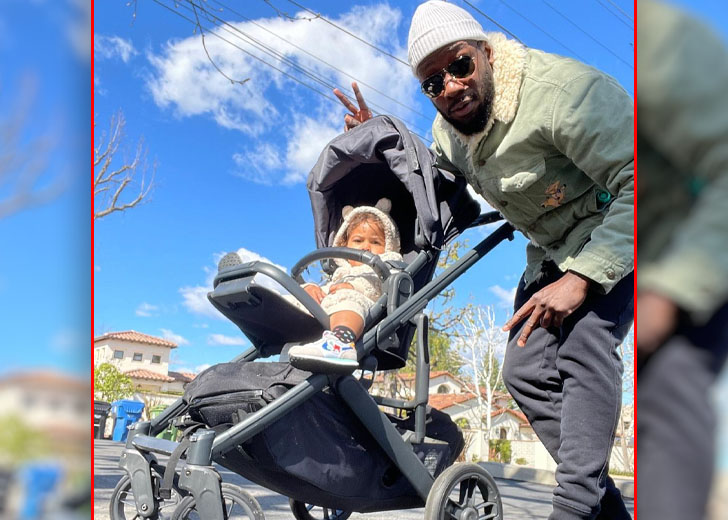 “She didn’t wanna scuff her kicks. So i had to push her around. Smh,” the actor writes while posting a picture with his rumored daughter.

Comedian Lamorne Morris uses comedy to shed light on some of society’s most uncomfortable discussions. He tackles political and social concerns with humorous flair, whether on-screen as dynamic characters or in off-screen conversations.

Also an actor and television personality, Morris is best known for his role as Winston Bishop in the Fox television series New Girl. He has further landed roles in movies like Game Night and Netflix’s comedy Desperados.

He also bagged the lead role in the Hulu dark comedy series Woke.

Fans have been fascinated by the actor’s personal life along with his professional success. Let’s look at everything to know about Morris’ personal life.

Lamorne Morris’ current and past relationships

Many outlets report that Morris is private about his personal life and does not have a girlfriend. Rightly so, the actor seems single at present.

He did, however, have a girlfriend and was in a relationship in the past. He was formerly dating Erin Lim. Lim, his ex-girlfriend, is an actress from the United States.

According to sources, the couple initially met in 2016 through an online dating app. They kept their romance a secret until September 2017. After attending the 2017 Emmys together, they made their first public appearance as a couple.

Lamorne Morris and his ex-girlfriend Erin Lim at Emmys.

The couple was very active on social media, constantly sharing posts about each other. Despite this, he deleted most of his photos with Lim in 2019, leading followers to believe they had broken up.

As speculated, their love did not endure long, and they split up for unclear reasons.

In a 2018 interview with Ebony, he confessed that his ex-girlfriend had cheated on him once, resulting in a breakup. Morris has had his fair share of relationship problems, whether they occurred in 2018 or before.

The actor has had a busy year, with back-to-back film releases and now the lead part in the new Hulu comedy series Woke. The actor admitted that he needed a break and went on to travel a lot. Currently, he is more career-oriented.

As Morris prefers to keep his personal life private, it is hard to determine if the actor is married or unmarried. Even though he had already been linked to a couple of females, he is believed to be unmarried so far, according to some sources.

A quick scroll through Morris’ Instagram shows that he often shares pictures with a little girl. But the actor is yet to reveal his relationship with her.

“Whaaat?!? Dude did I miss you announcing a kid?!? If so congrats my friend! Very excited for you,” one of his followers commented in his October 2021 post, inquiring if the baby was his daughter.

Most recently, on April 17, 2022, he again posted a couple of pictures with the baby. The picture clearly had his fans in awe, as they were mesmerized by the cute chemistry between the two.

But it is unclear if the little one is his daughter, as he has not clarified that information.

On the other hand, Morris’ sister, actress and reality television personality Alesha Renee, is often spotted referring to the child as her “god baby.”

Morris is also frequently rumored to be dating onscreen lover and co-star Nasim Pedrad. Thanks to their flawless chemistry in the Fox show New Girl, fans have always assumed that the on-screen couple is also a real-life couple.

Moreover, in 2018, reports of them being a relationship began to circulate. They are also co-stars on 2020’s show Desperados.

However, this might break many fans’ hearts, but the duo is not dating in real life.

Furthermore, the rumor that Morris and Pedrad were dating was never accepted by them. They did, however, acknowledge being merely a good friend and nothing more. The duo share a special bond but aren’t dating in real life.