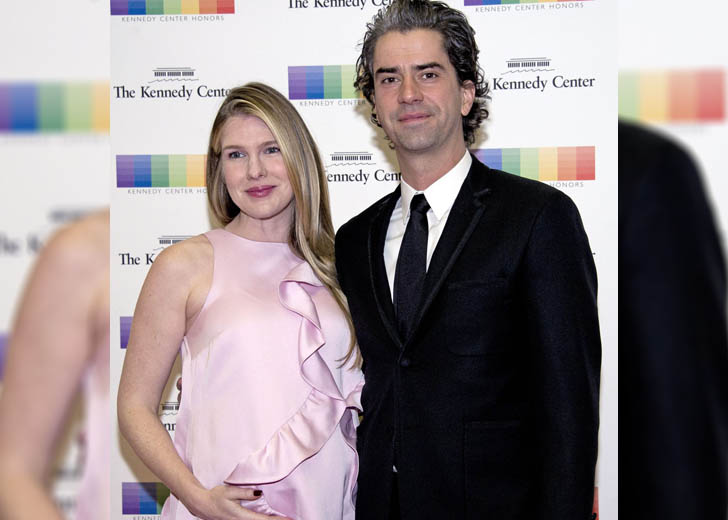 On Sunday evening, October 3, the couple were seen attending the Los Angeles premiere of Rabe’s upcoming movie The Tender Bar. During their attendance, the actress’s growing baby bump was clearly seen.

During the premiere, the soon-to-be parents of three looked amazing as they took turns cradling Rabe’s stomach. When Linklater was seen rubbing his hand over his partner’s stomach, a million-dollar smile was drawn by the American actress.

The Good Wife actress donned a long sleeve floral frock that highlighted super feminine frills on the sleeves and at the neck. She had tied back her blonde hair in a high ponytail with soft tendrils framing her face. Additionally, her glow was further seen through her magenta lipstick.

As for her partner, Linklater, he looked handsome as he wore a black suit with a white button-down.

The public appearance came just one week after it was confirmed that she was pregnant with a third child with Linklater’s baby. The news of her pregnancy was first confirmed to People by Rabe’s rep, just after her red carpet debut at the Academy Museum of Motion Pictures Gala on September 25.

As of now, none of them have revealed the names of their two daughters. Perhaps, they are looking to keep their children out of their limelight. And, the same might be done when they welcome their third child.

The present parents of two have been together for more than eight years.

Linklater and Rabe first met each other in 2010 when they starred opposite each other in the production of The Merchant of Venice. However, as Linklater was in another relationship at that time, nothing happened between them.

It was three years later, in 2013, after Linklater had become single for quite a time that things got forward between them. In the same year, they eventually began dating each other.

As the two’s relationship took forward, they took the decision to stay quiet on their personal life matters. Their togetherness continued as they relished each other’s company, while also maintaining secrecy.

In July 2015, during an interview with The New York Times, it was clearly noted that the duo chooses to remain private and opts out to nerd over their shared love of Shakespeare and the art of acting instead.

However, despite their privacy, it can be easily seen the love and care they have for each other. Their bond got further strengthened when they welcomed children. And though they are yet to share the wedding vows, the boyfriend-girlfriend duo is still going strong.

From his marriage with Goldberg, he has a daughter named Lucinda Rose Linklater.

Both Linklater and Rabe have achieved a lot in their career in the entertainment industry. Talking about Linklater’s career, he made his acting debut through 2000’s Groove.

As for Rabe, she made her acting debut just one year after Linklater made, in 2001, through a movie titled Never Again. Presently, she has a total of 41 acting credits, with four more to be added soon, as per IMDb.

Posted on January 26, 2021February 14, 2021
Eoin Macken is an aspiring Irish model, actor, filmmaker, and author. He has acclaimed fame due to his roles in numerous movies and TV...
Read More