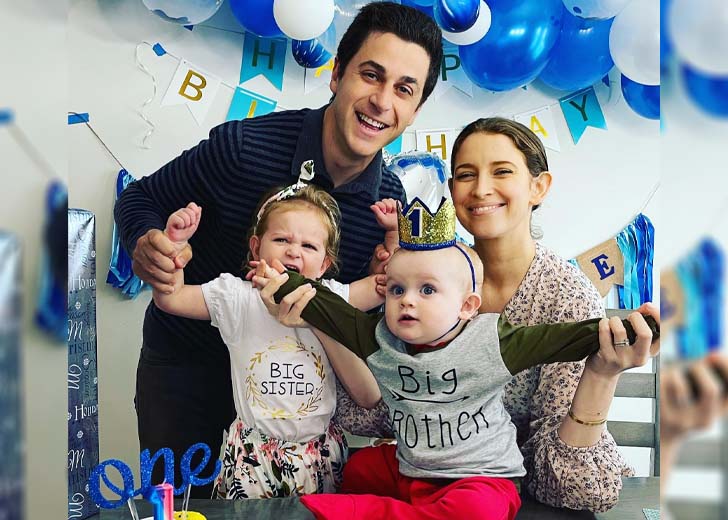 It’s a family of five now! Congratulations to David Henrie and his wife Maria Cahill who are expecting a third child.

On Wednesday, December 29, 2021, the American actor took to Instagram to announce the good news, sharing a family picture featuring himself along with his wife and two children, James Thomas Augustine Emanuel and Pia Philomena Francesca Henrie.

“Maria and I were really racking our brains on what to get our son James for his first birthday… #3 #bigbrother,” the How I Met Your Mother star wrote in the caption.

“Congrats!!!” the Lost in Space star Maxwell Jenkins commented in the actor’s post.

Another added, “You’re actually going to have your own Alex, Justin and Max…congratulations!!”

Presently, neither Henrie nor Cahill has given out any details on their third child’s gender. Presumably, it seems like they will not find out the gender and wait till the birth — a perfect gender reveal, right?

As mentioned earlier, before expecting a third baby, the couple were already parents of two adorable kids. Their firstborn is their daughter, Pia, whom they welcomed on March 19, 2019, following three heartbreaking miscarriages.

Less than two years later, Cahill gave birth to their second child, a son named James. The occasion of their son’s birth became more special as it was Christmas Day.

Who Is David Henrie’s Wife?

Henrie’s wife, Cahill, is a private person despite being in the limelight thanks to her husband’s profession. Due to that, only tidbits of information are available on her.

Born in 1991, in the United States, she is 30 years of age, as of this writing. She celebrates her birthday on the 12th of January every year. Her zodiac sign is Capricorn.

She is a former model who has won some pageant titles, including 2011’s Miss Rehoboth Beach and Miss Delaware. Additionally, she has also worked as a teacher — which eventually led her to meet her husband.

Besides that, not much information is known about her, such as her family life, present professional, and so on.

A Look at David Henrie and Maria Cahill’s Relationship

The Wizards of Waverly Place star has been married to his wife for over four years now.

The now-married couple first met each other around late-2014 at an event, where they both were speakers. They got to know each other more briefly and eventually began to date after a while. As years passed, they became closer.

After being in a relationship for almost two years, in October 2016, they got engaged. Six months later, on April 21, 2017, they shared the wedding vows at an Old Hollywood-inspired ceremony in Southern California.

Around 170 guests were there to witness the wedding, including Henrie’s co-stars such as Selena Gomez, Jake T. Austin, and others. After the wedding, the couple went to Sandals Regency La Toc in St. Lucia for their honeymoon.

“I’m excited to actually go away with her and just be alone. It’s been such an ordeal leading up to [the wedding], so when you’re alone and you can finally exhale and look at each other … I’m really excited for that,” the actor told People at that time.

Similarly, before the marriage, Cahill had told People, “One of my favorite things about him is how funny he is and how we just get each other. Being married is going to be just that much better.”

Since their marriage, the couple has been holding each other hands and supporting their partner in every possible situation. All of that has done nothing but strengthen their bond, which seems to remain intact for years to come.