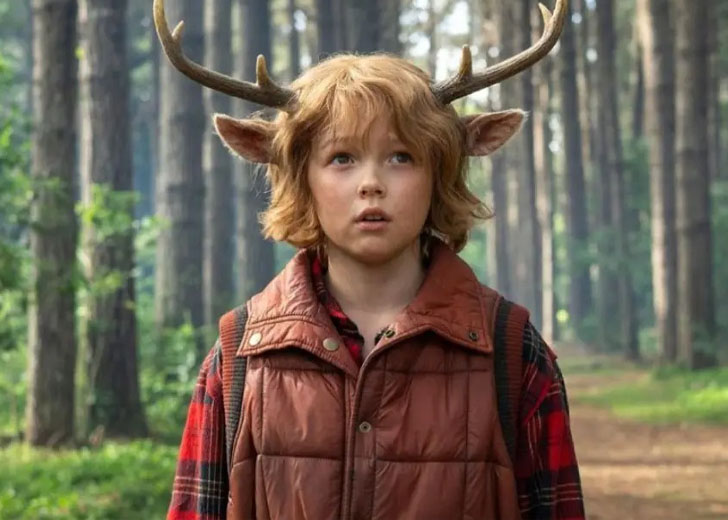 Christian Convery is an award-winning Canadian child actor who recently was in the spotlight for his portrayal of Gus in the Netflix fantasy drama series Sweet Tooth (2021).

The Netflix drama series followed Convery’s character, Gus, a half-human/half-animal hybrid, in a post-apocalyptic world while he seeks his mother while also trying to stay safe from the hybrid capturers/killers.

Hailing from the suburbs of Vancouver, British Columbia, Canada, the uprising child actor was born in the year 2009. He is currently 11 years old but will turn 12 after a couple of months on November 10. His zodiac sign is Scorpio.

Convery celebrated his last birthday while he was in New Zealand. On that special day, he took to Instagram to share some glimpses from his 11th birthday. First, he posted two pictures from the initial part of his birthday.

Later that day, he shared a selfie of his with a caption, “It was just the kind of night!!! Filled with lots of love, incredible friends, and the most amazing Birthday Bash!! Thank you to everyone that came!! You all made my evening that extra special!!! [Love] to all of you!! #birthdaybash #birthdayinnewzealand.”

Who Are His Parents?

The Christmas List actor is the son of Lisa Convery. His mother is an actress who has made her appearance in Sous le soleil (2000) and Troubled Waters (2004).

Although the identity of Convery’s mother is known, the whereabouts of his father is still unknown. The child actor has not mentioned anything about his father either in the media or in his social media handles.

There are reports that he was solely raised by Lisa, as a single mother. And, it seems to be true as Christian has only posted about his mother, shared pictures alongside her, gone on vacations for a very long time.

Speaking of the mother-son duo’s relationship, they have a great bond, as seen on Christian’s Instagram pictures. The child actor always praises his mother and never forgets to wish her on Mother’s Day.

He Loves to Visit Places

Even though Christian is just 11 years old, he has already visited tons of amazing places with his mother, Lisa, by his side. One of the major destinations of the mother and son duo is New Zealand.

They have been to several beautiful places in New Zealand on more than one occasion. Other than their destination to the lovely country, Christian has also traveled to several parts of the world.

He has been to Mauritius in East Africa, Martinique in the Caribbean, regions of France, the British Virgin Islands, Hawaii, Thailand, Mexico, Beijing, and many other places. While he was in those places, he goes to visit some tourist places.

The child actor has already gone on hours-long hikes, done scuba diving, surfing, walk on and toboggan down the Great Wall of China, and many more things—he is a certified Padi Scuba Diver and Junior Lifeguard.

Christian is currently enjoying his time in Ireland with his mother and friends.

He Is a Talented Guitarist

Not only is Convery a talented actor, but he is also a gifted guitarist. He likes to hold on to his guitar in his free time and play it for hours.

His talent as a guitarist can be seen through his Instagram handle, where he occasionally posts videos of him playing guitar.

A sneak peek of his talent was seen on July 24, 2021, when he shared a small clip of him playing his electric guitar. In the video, he was seen playing some tunes of Guns N’ Roses’s Sweet Child O’ Mine.

“A little sneak peek of my next song… #guitar #electricguitar @gunsnroses,” Convery had written in the caption of that post.

The Vancouver, British Columbia native got his first acting gig when he was just 6 years old. In 2016, he made his acting debut playing the role of Conner in the TV movie Hearts of Spring.

In the same year, Convery was cast as the lead in the TV movie My Christmas Dream — played the role of Cooper. Later that year, he appeared on Christmas List and Van Helsing. In 2017, he appeared in four acting gigs.

They were Christmas at Holly Lodge (TV Movie), Coming Home for Christmas (TV Movie), Lucifer (TV Series), and Legion (TV Series). By the time 2017 was over, he had already managed to make a name for himself as a rising child actor.

In 2021, his popularity got further boosted when he played the lead role of Gus in the Netflix series, Sweet Tooth. In the show, Convery was accompanied by stars such as Nonso Anozie, Stefania LaVie Owen, Aliza Vellani, Will Forte, Dania Ramirez, Naledi Murray, and others.

Posted on August 25, 2021August 25, 2021
Anthony Quinonez, known by his stage name Tony Revolori, is an American-born actor of Indian decent. He received widespread fame after portraying the role...
Read More