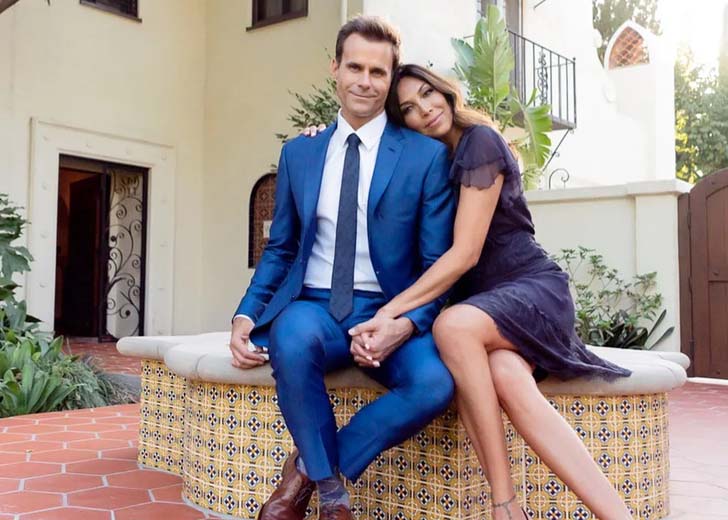 Cameron Mathison is a talented Canadian-American actor who is best known for portraying the role of Ryan Lavery in the show All My Children. He played the role from 1997 to 2011 in over 1,100 episodes.

He is presently gaining fame for his performance as Drew Cain in the ABC soap opera titled General Hospital. He joined the show in 2021 but has already made his appearance in almost 90 episodes.

Mathison’s popularity is always rising thanks to the two great roles in two renowned TV shows and his works in multiple Hallmark movies.

And apart from a fruitful acting career, the other thing he relishes is his marital relationship with his longtime wife, Vanessa ‘Arevalo’ Mathison. Furthermore, the duo is the parents of two beautiful children.

Who is Cameron Mathison’s wife?

Cameron Mathison’s first and last wife, Vanessa Mathison (neé Arevalo), is a model and entrepreneur, who belongs to Mexican and Filipino descent. She was born on April 19, 1967, in Los Angeles, and is currently 55 years of age.

Before becoming a wife and mother, she had a flourishing career as a model – she did modeling for 18 years. But, when she welcomed motherhood into her life, she decided to take a break from modeling and raise her children.

While Arevalo was away from modeling, she joined the world of children’s fashion as the co-founder of her clothing line named KEA + JOBY. The business venture was successful in its own way.

Years later, she returned to modeling and is currently signed with LA Models. Additionally, she has appeared alongside her husband on the screen multiple times as a guest host on Mathison’s Hallmark Channel show, HOME & FAMILY.

The couple had also appeared together on the actor’s show, HOUSE RULES, in 2015. Arevalo once again shared the screen with her partner in the soap opera General Hospital — officially making her acting debut.

She appeared as an executive coach named Mia on the April 21, 2022, episode of the show. Arevalo’s appearance on General Hospital came 40 years after being a fan of the soap opera.

As mentioned earlier, Mathison is presently in a blissful marital relationship with his longtime wife, Vanessa Arevalo. The couple has now been married for more than 19 years.

Mathison met his future wife around the early 2000s and eventually started dating. As per the actor, they were a little wild back in the day. He told Soap Opera Digest in 2017, “When we first met, we were, like, full-time, part-time partiers. I was a maniac, and she was my partner-in-crime!”

However, as they spent more time together, they decided it was best to become a little more serious in their life. “I remember [Vanessa] telling me once that she felt like her job on Earth was to be a mom, and I was floored by that,” he said.

Continuing his sentence, Mathison said, “because she was a successful model with an incredible business sense and had lots of stuff going on. I remember that conversation well, how serious she was.”

The actor eventually asked his then-girlfriend for her hand in marriage. And on July 27, 2002, Mathison and Arevalo went on to share the wedding vows. Their wedding ceremony was held in Vail, Colorado.

Cameron Mathison and his wife, Vanessa Arevalo, on their wedding day (Photo: Instagram)

Speaking of how he proposed to his now-wife with YourTango.com, he said, “We hiked up through the snow to this little plateau — she was actually a little annoyed at me. I sat her down with a beautiful view behind her, and I turned my back to her to go set up the camera.”

“I pulled out the ring and turned around and proposed to her with the camera taking a ton of pictures. Then, I had a big champagne lunch waiting for us at the bottom of the mountain. We skied down the mountain — she said she couldn’t feel her legs and was terrified she would fall and break her leg!”

Thankfully, her legs didn’t break, and they went on to have an amazing wedding. And since their marriage, the duo has been inseparable, loving and supporting each other in every step of their lives.

As of now, the married couple has been married for over 19 years. And on this year’s July 27, they will mark a new milestone — 20 years of their marriage.

Two weeks after getting married, Mathison and Arevalo learned that they were expecting their first child together.

Speaking of that moment with Soap Opera Digest, the actor said, “Now, whether I was truly ready — well, if you ask me, it’s a different answer than what you’ll get if you ask Vanessa!”

Arevalo gave birth to her first child, a son named Lucas Arthur Mathison, on April 20, 2003. And the fatherhood set upon Mathison immediately. “He had some complications and had to be in the ICU for a bit,” he recalled.

“All of a sudden, I had this little, beautiful stranger come into the world and become the most important thing to me. It’s the best thing that ever happened to me, but at the same time, it was a surprise — ‘Wait a minute, it’s not about me anymore? What’s up with that?’” he added.

Similarly, Arevalo had to make a little adjustment despite being overjoyed to be a mother. She told People in 2008, “I think I went through a bit of an identity crisis. I was a very successful model for 18 years. I was completely independent and self-sufficient and traveled around the world. And in a minute, I was a stay-at-home mom.”

The Mathison family expanded again when the duo welcomed a daughter named Leila Emmanuelle Mathison on July 7, 2006. The actor mentioned that his wife was already happy with having one child.

Cameron Mathison with his wife, Vanessa Arevalo, and their children in Greece (Photo: Instagram)

“I kind of had to push to convince her to have a second, and she’s amazing,” he said of her daughter. “Having a little girl … it’s just so special. It’s something that I secretly — or maybe not so secretly — really wanted. And she’s just this little angel, this little beam of light. They’re both really happy kids. I’m very lucky.”

Since the birth of their kids, the parents of two have given their utmost best to raise their children in a good environment. Their son is now 19, and their daughter is 15, but the couple still takes out as much time as they can to spend with their kids.

He told Soap Opera Digest that he really makes an effort as a father to spend family time with them and have one-on-one alone time with each of them. He further said that his children have so many cool interests.