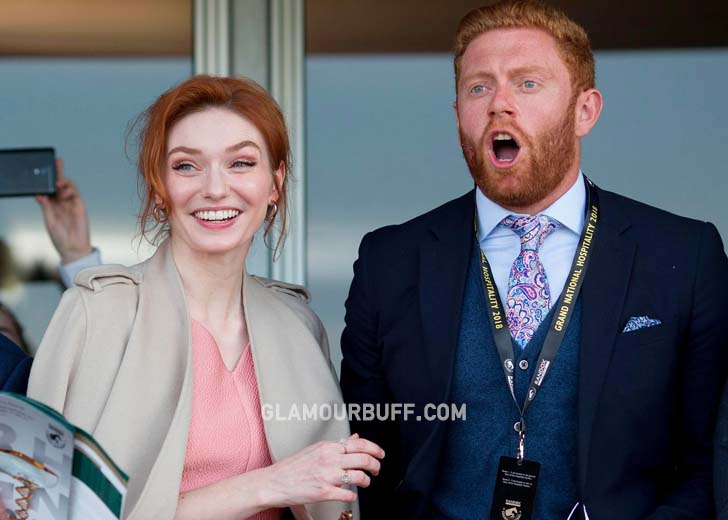 The Sun’s source claimed, “They both really hit it off. He kept trying to persuade her to go out clubbing with him after.”

A few years back, English cricketer Jonny Bairstow and English actress Eleanor Tomlinson were rumored to be dating after they were captured together at Aintree.

The Sun‘s source revealed that Bairstow and Tomlinson had built a blossoming bond during their trip.

In 2018, actress Tomlinson and England cricket’s star player Bairstow were rumored to have formed a growing bond.

As per The Sun, the actress and player allegedly exchanged numbers while flirting on a day trip to Aintree.

After five hours of drinking in a private box at the race track, the wicket-keeper-batsman was reported to have asked the diva, 25, on a date.

The Sun’s source claimed, “They both really hit it off. He kept trying to persuade her to go out clubbing with him after,” but Tomlinson decided to go home.

The Yorkshire player also posted a picture of them at the races and captioned, “It was amazing to share some special memories with some special people!”

Eleanor Tomlinson is married to Will Owen

The Poldark star Tomlinson got married to a rugby union player in 2022. She revealed the news via an Instagram post.

She shared lovely pictures with her husband from their wedding day and wrote, “When a Miss becomes a Mrs. I love you.”

The pair started dating a few years back — around 2020 — and went public on social media the same year.

After dating for about a year, Tomlinson and Owen engaged in 2021. However, there is little information regarding their first encounter or how they met.

And that also clarifies that Bairstow is definitely not dating Tomlinson, and there are no details of him having a girlfriend or a wife at present.

Who is Eleanor Tomlinson?

Tomlinson is an English actress and singer known for her role as Demelza Poldark in BBC’s historical television series Poldark.

She has appeared in numerous films, including Angus, Thongs and Perfect Snogging, Jack the Giant Slayer, Colette, and Love Wedding Repeat.

She also has appeared in many television series like The White Queen, Death Comes to Pemberley, The War of the Worlds, The Nevers, Intergalactic, and The Outlaws.

Bairstow was born on September 6, 1989, in Bradford, West Yorkshire, to former England wicket-keeper David Bairstow. The cricketer plays internationally for England, and in domestic, he represents Yorkshire.

He showed talent at a young age when he was selected as the first Young Wisden Schools Cricketer of the Year winner.

Bairstow played in Yorkshire’s second XI cricket during the 2008 campaign. Later, he signed a two-year contract with Yorkshire.

In 2010, Bairstow was a regular member of the Yorkshire squad, appearing in 16 first-class games and making 918 runs. His efforts earned him a spot on the England Performance Program group that will tour Australia in 2010–11.

He, along with Ben Stokes, holds the world record for the highest sixth-wicket stand in Test: 399 against South Africa.

IPL’s Punjab Kings bought the player at 6.75 crores during the 2022 IPL Auction. The Welsh Fire later acquired him for The Hundred’s 2022 season.