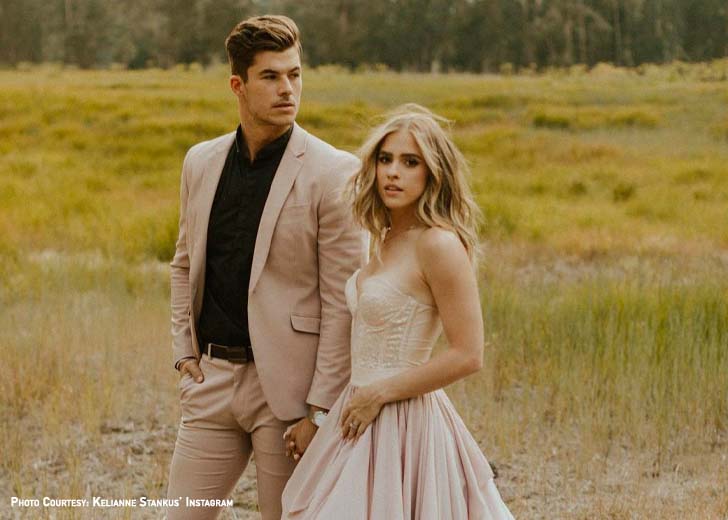 The pair discussed having children seemed natural, considering that Mattson already has kids from his previous marriage.

Despite not yet having their own children, singer and social media celebrity Kelianne Stankus and her husband Chase Mattson often talk about kids and family planning. For instance, the two once discussed having babies on the reality show House of Creators.

They stated that Mattson already had children from his prior relationship, so having children seemed reasonable.

The pair is yet to make an announcement about their pregnancy, but Mattson is not new to fatherhood.

He has two children, both daughters, Hazel and Nora, from his previous relationship with Devyn Jackson. The actor said [via Distractify], “Fatherhood is the single greatest job I have ever had and will ever have.”

Chase Mattson with his daughters at his wedding. (Source: chasemattson/Instagram)

As mentioned, before getting married, Stankus and Mattson talked about their family planning during the second episode of the reality show House of Creators.

They discussed how having children seemed natural, considering that Mattson already has two kids from his previous marriage to Jackson.

However, Stankus also teased their fans about their pregnancy scare, and she tested negative after testing twice.

In the episode of House of Creators, Mattson revealed that he was sad when the test results came out negative, and her wife also agreed that she was disappointed.

Stankus and Mattson first met through Instagram in early 2020. She was the one to make the first move, messaging Mattson first and starting a conversation.

After staying friends for a brief period, they went on their first date on May 9, 2020. The same year, they started to appear on each other’s social media and became public with their relationship.

They got engaged on December 12, 2020. In a video he uploaded to his YouTube channel in February 2021, Mattson detailed his charming proposal.

In the three-minute video, Mattson took Kelianne into a helicopter, and the pair flew by over the Hollywood sign before he blindfolded her. The helicopter took off for their destination in the mountains.

As Stankus removed her blindfold, she saw a magnificent dinner table. He knelt down and proposed to her. She started to cry as she accepted and gazed at the ring.

In a later vlog tape, Mattson claimed that he had trouble sleeping the night before because he was so “excited” to “spend the rest of my life” with her.

After being engaged for over a year, Mattson and Stankus decided to advance to the next level. They exchanged their wedding vows on Thursday, June 9, 2022, in a romantic ceremony in California.

The duo told People that their wedding was magical and was everything they wanted in a marriage ceremony. They said “I do” at the Serendipity Garden in Oak Glen in front of their friends and family.

Posted on August 28, 2022August 28, 2022
Julio Macias and his wife, Shannon Schotter, are extremely private about their married life.
Read More