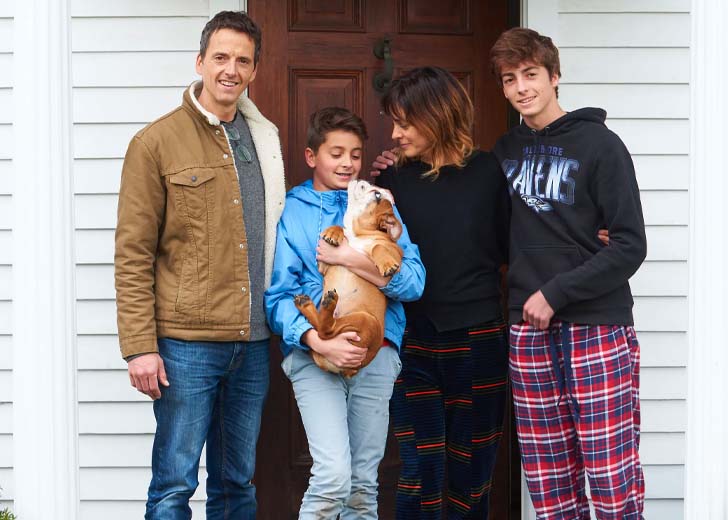 “We say thank god we are together, and that we like as well as love each other,” Stephanie Szostak says about her family.

Stephanie Szostak and her husband, Britt Szostak, have been together for nearly three decades.

The two have known each other since the early 90s, having celebrated Valentine’s Day Party in Paris on February 14, 1992. They also exchanged kisses at the time.

Keeping the promise of being one another’s forever, they eventually tied the knots on August 30, 1996.

They presently reside in Westport, United States, along with their two sons and one adopted puppy.

Moreover, the French actress once revealed during an interview that she had sort of lost herself in her 30s, as she became a mother during that period.

But Stephanie, who is in her 40s now, feels rejuvenated and has found her real self — while being accompanied by her husband and two kids.

In October 2019, Stephanie talked to Byrdie magazine and initially shared her skincare secrets as well as her career. During the interview, she was also asked about the biggest life lesson she had received out of each decade.

Replying to that, she revealed something that was surprising. She stated that when she became a mother in her 30s, it was hard for her because she had lost herself a little bit.

She went on to share a lesson that her mother had told her when she was tackling that phase of her life during that phase.

Her mother had told her to “Keep your life alive.” “You have children and you’re a mother, but have your own life, because your children will leave one day and you need to know who you are,” her mother added.

And when the actress stepped into her 40s, her mother again shared some words with her. The actress remembered her mother saying, “Oh, your 40s will be the best decade of your life.”

Surprised by her mother’s words, she asked, “Why?” Her mother replied, “Because you finally know who you are and you don’t care as much.”

The actress ended her interview by saying she found her mother’s words to “be so true,” as she indeed lost herself in her 30s while being a mother, and by her 40s, she had again found herself in her true colors.

Stephanie has a family of four members: her husband, Britt Szostak, two sons, and herself.

As mentioned, there was a phase in her life when she lost herself while looking after her family members. However, she now feels that she is rejuvenated and has found her real self.

The actress happily credited her husband and two sons for her newly found happiness and energy while speaking to Westport In Focus in April 2020. She shared that from gaining energy from alone moments, she has gone on to find her happiness in being together with her family.

“I gain energy from moments alone, and that is challenged now. It goes without saying, though, that it’s a blessing to be together with our loved ones. We say thank god we are together, and that we like as well as love each other,” she said.

The A Million Little Things star added that she and her husband had drawn a lot of resilience from their kids because the kids (two sons) are always in their moments, which is incredible and motivating.

She continued, “We’ve also drawn a lot of resilience from our kids. Kids are incredible because they are in the moment always.”