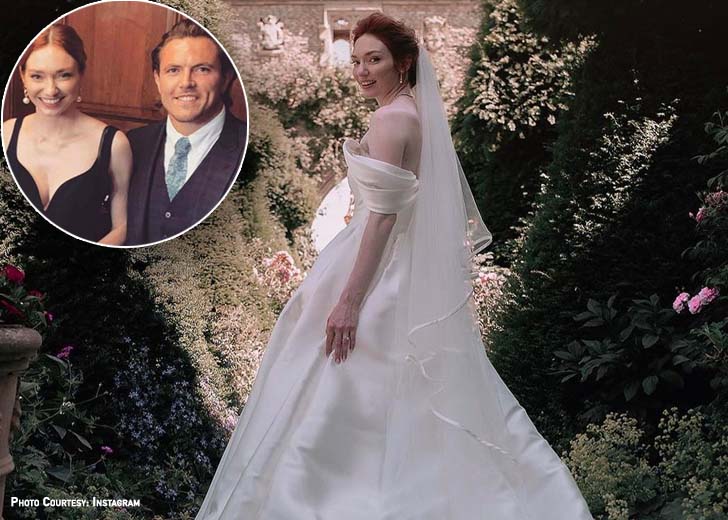 Inside Eleanor Tomlinson and her husband Will Owen’s relationship timeline.

English actress and singer Eleanor Tomlinson tied the knot with her boyfriend Will Owen, a rugby player, surrounded by their close family and friends at Euridge Manor.

The pair went public on social media with her boyfriend Owen in February 2020 after Tomlinson posted a cute picture of themselves on Valentine’s Day.

The singer also disclosed that she had spent most of her time with Owen’s family as they isolated themselves together during the COVID-19 pandemic.

When Tomlinson wished her Instagram followers a Happy Valentine’s Day in 2020 and shared a photo of her with Owen cuddling, she gave the first indication of a new romance.

The actress was with Owen and his family in Coventry during the coronavirus pandemic. She revealed to the Overrated podcast in 2020 that she enjoyed his parents’ company while under lockdown.

The Love Wedding Repeat actress said, “We’re just having a real laugh. Just sitting out in the garden doing a lot of drinking,” to the podcast. A source exclusively told The Sun that the pair often saw each other for quite a few months and were absolutely smitten.

The source also claimed that the English actress took her time and did not rush into anything, and she really thought things could go far with Owen.

The source told The Sun, “It’s been a while since her last boyfriend. She took her time, didn’t rush into anything and she really thinks things can go far with Will who is a proper man’s man.”

Indeed, things went far after the pair were rumored to be engaged in November 2021, when Poldark’s star, as per Daily Mail, walked out of the supermarket with a shiny diamond ring on her finger in London. She was also spotted flaunting the ring alongside Owen at their friend’s wedding.

Eleanor Tomlinson and Will Owen at their wedding. (Source: eleanortomlinson/Instagram)

After a year, in July 2022, the duo got married, and the ceremony took place at Euridge Manor in the rolling hills of the Cotswolds. Tomlinson donned a stunning off-shoulder traditional wedding gown paired with Christain Louboutin heels.

“When a Miss becomes a Mrs. I love you,” the newlywed bride captioned photos of herself and her husband from the wedding day that she shared on July 13. She also thanked her family and friends who were able to be part of their new journey.

Who is Eleanor Tomlinson’s husband Will Owen?

Owen is an English rugby union player who plays the flanker position. He previously played for the Nottingham R.F.C and Leicester Tigers.

Hailing from Suffolk, England, the player has also played for Doncaster Knights on loan during the 2015-16 RFU Championship season. He also represented England Under 20s on 12 occasions and competed in the 2015 World Rugby Under 20 Championship.

HyunA and Dawn Break Up after Getting Engaged Earlier This Year