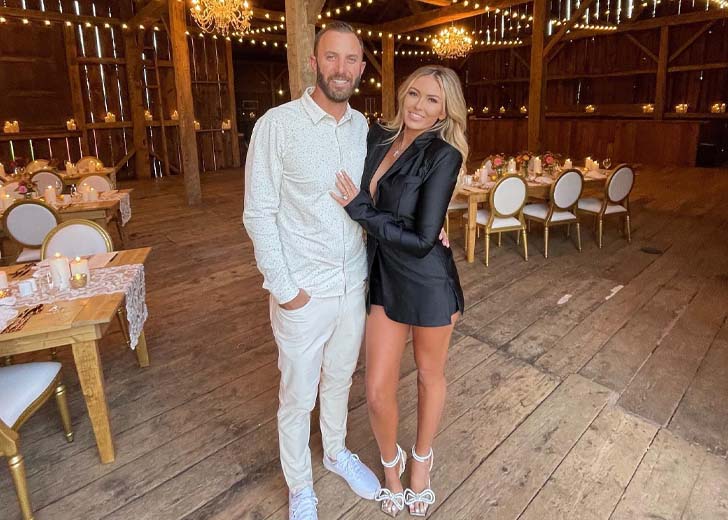 Dustin Johnson and Paulina Gretzky were engaged for almost ten years before tying the knots.

Dustin Johnson has finally walked down the aisle with his fiancee Paulina Gretzky.

On Saturday, April 23, 2022, the American professional golfer married his actress/model partner in a private wedding ceremony witnessed by family and close friends.

A source told People Magazine that the couple tied the knots at Tennessee-based Blackberry Farm as they had previously planned. Their wedding location is said to be luxurious and can be located around three hours outside of Nashville.

On her special day, the bride stunned everyone with her amazing wedding dress, which Vera Wang designed. Similarly, the groom initially donned a white shirt and black suit with a bow tie.

Later on, both Johnson and Gretzky wore different dresses — possibly for a photoshoot. In the latter part of their wedding, the golfer wore an all-white attire, whereas his now-wife wore a white backless gown designed by Vera Wang.

Before the wedding news came out, Gretzky had teased several other moments and the wedding date via her Instagram handle. In an Instagram story, she had shared a picture of a letter that her now-husband wrote to her.

In it, Johnson had written, “Paulina, you are the love of my life. I’m counting the seconds until I marry you. I love you to the moon and back. xo, Dustin.”

Dustin Johnson with his wife Paulina Gretzky at their wedding (Photo: Instagram)

Johnson and Gretzky shared a few – but the same – moments from their wedding day on their respective Instagram handle on April 25, 2022, with a caption that stated their wedding date. It seems like the couple is relishing the moment.

Who is Dustin Johnson’s wife?

Johnson’s wife, Paulina Gretzky, is a renowned personality who was born in fame as the daughter of retired ice hockey Hall of Famer Wayne Gretzky and his actress wife, Janet Jones.

Born on December 19, 1988, Paulina is presently 33 years of age — making her four years, five months, and 27 days older than her husband. She was raised in the city of Los Angeles, California.

Coming over to her profession, she is a model and actress. As an actress, she has appeared in a few movies and TV shows, including Life and Times, Fame, Grown Ups 2, Laguna Beach: The Real Orange County, and Guns, Girls and Gambling.

According to USA Today, Johnson and Gretzky started dating just before the 2013 PGA Tour season started.

In the same year, on August 18, 2013, the pro-golfer decided to make his actress girlfriend his fiance as he went down on his knees and proposed to her — she said yes, and they got engaged.

Since then, the couple has always been together through thick and thin. Gretzky could always be seen on the sidelines supporting her future husband at several golf events worldwide.

In September 2014, Gretzky announced she was pregnant with her first child with Johnson. The two welcomed a son named Tatum Gretzky Johnson on January 19, 2015. Their son was born in Los Angeles.

Over two years later, in February 2017, they announced that they were expecting their second child. On June 14, Johnson became the father of two as he welcomed his second son, River Jones Johnson, into the world.

Following the birth of two children, the duo’s bond has been stronger than ever. And they have always stayed by each other’s side despite several ups and downs in their relationship, including one break-up rumor in September 2018.

Thankfully, those speculations were not true, and the couple’s relationship continued. In 2020, Johnson opened up about how much he values his family and how his one true love of golf shifted once he found Gretzky and had kids with her.

In May 2021, Gretzky talked about why she and Johnson have been engaged for such an extended period during her appearance on the Pillows & Beer podcast.

She said, “I just did things my own way, I just didn’t want to listen to how everyone else viewed things. I fell in love with someone so fast and we just had the best thing that’s ever happened to us happen so quickly.”

Less than one year after saying that, Johnson and Gretzky have tied the knots. We wish the married couple nothing but the absolute best.