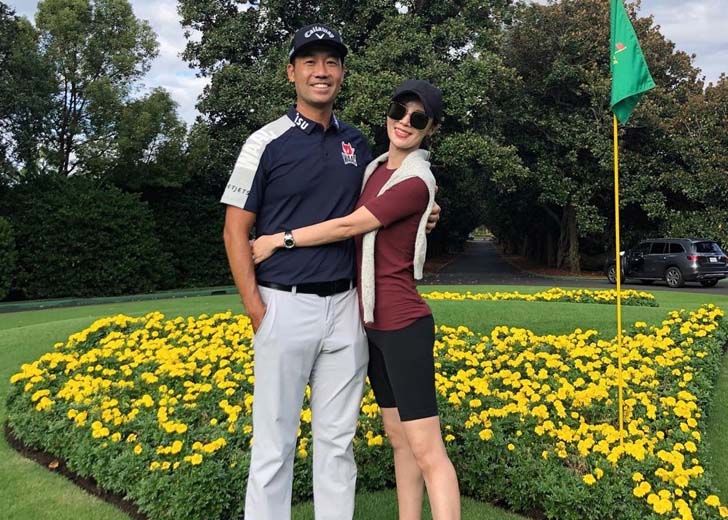 Kevin Na is a talented Korean American professional golfer who has garnered fame worldwide through his amazing golf skills. He has been playing the game since he was 17 and has achieved several accolades.

And standing by his side in many of those achievements is his life partner Julianne Na. The happily married couple has been married for over six years and recently completed six years of their marital relationship.

Who is Kevin Na’s wife?

As mentioned earlier, Kevin Na’s wife is Julianne Na. As of now, there are little to no details available about her, including her professional, personal, and family life.

Thus, her profession and net worth details couldn’t be obtained. It’s so because Julianne prefers to keep a low-key image and remain out of the limelight of her renowned husband.

As for the things known about her, it has been reported that she hails from the suburbs of South Korea and holds an American nationality – like her partner. Born in 1987, she celebrates her birthday every year on September 26.

Recently, in April 2022, Julianne was seen helping her husband as a caddie at the Par 3 Contest of the 2022 Masters.

Kevin and Julianne were longtime friends before they started dating and eventually married. Reports suggest that they were friends for nearly a decade; however, how and where they first met is unknown.

Another undisclosed thing is when they turned their friendship into a relationship. But, sometime after they began dating, they didn’t hesitate to take a big step and get married.

On April 24, 2016, the couple walked down the aisle and shared the wedding vows. The two wore simple wedding dresses. Accomplished American saxophonist Kenny G was in attendance to make their special day more memorable.

Since then, Kevin and Julianne have never been apart and could always be seen together, spending lovely time at several places. Some of the places they have been to include France, Italy, and Hawaii.

Their bond got stronger than ever when they welcomed kids into their families. The two are presently parents to three children: two sons and one daughter.

Kevin and Julianne welcomed their eldest child, a daughter named Sofia Ria Na, on August 29, 2016. He missed that year’s Deutsche Bank Championship when his first child was born.

In an Instagram post, he wrote, “hard to leave home when I see my baby girl. No Deutsche Bank Championship. BMW next. It will be tough leaving home to play BMW. #Sophia #Nafamily #daddysgirl.”

The duo’s second child, a son named Leo LeeWoo Na, was born on August 19, 2019. Similarly, on March 7, 2022, Julianne gave birth to her third child with Kevin – their second son, whom they named Logan Leeohn Na.

The married couple is again relishing the days of new parenthood while also taking care of their two children. The family of five presently resides in Southern Highlands Golf Club, Las Vegas, Nevada.

Kevin Na was sued by his former fiance

Before his well-going relationship with his present partner, Kevin was engaged to a fellow South Korean woman identified as Chung – Chung is her family name, and her first name hasn’t been disclosed.

The Korean Times reported that Kevin and Chung first met each other via a dating agency sometime in 2013 and engaged in the same year. The outlet further reported that they used to travel from one tournament to another and that Chung said the expenses totaled 100 million won ($85,000).

After getting engaged, there were also talks about their marriage by November 2014. However, just a month before their supposed wedding, Kevin allegedly broke the engagement and canceled the wedding.

As per Chung, the golfer told her over a phone call that “I don’t love you.” After the wedding was called off, the two families met over a formal meeting to return the gifts they sent over to each other, but it’s said that Chung’s family didn’t return the gift.

Later, Chung’s family reportedly threatened the golfer with consequences until and unless he doesn’t tie the knots with their daughter. When Kevin declined, Chung’s mother decided to show up at the Korean Open with a playboard that said to give back her daughter’s life.

Additionally, the Chung family filed a lawsuit demanding compensation worth 500 million won ($420,000) for several financial damages and other legal grounds. The woman, aka Chung, had accused Kevin of treating their relationship like “sexual slavery.”

All of this gained huge coverage in the Korean media. In the end, Kevin was ordered by the court to settle the case for $170,000. Furthermore, it has been reported that the golfer countersued for defamation and eventually won the lawsuit, resulting in the court ordering Chung to pay $50,000 to Kevin.