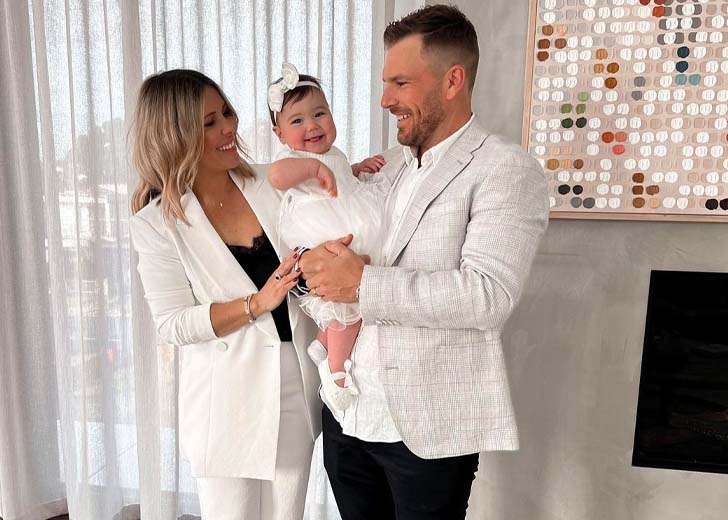 All about Aaron Finch and his wife Amy Finch’s married life.

Aaron Finch is an Australian professional cricketer who captains the Australian cricket team in limited-overs cricket. He is a top-order batsman and occasional left-arm orthodox spinner.

He became the first player in the history of the International Cricket Council (ICC) T20I rankings to attain 900 ranking points in July 2018. The same year in October, he made his Test debut for Australia.

As of August 2022, Aaron has scored 19 centuries in international cricket throughout his career, including two in Twenty20 and 17 One Day Internationals.

Amy Griffith, now Amy Finch, is widely recognized as the wife of famous cricketer Aaron. However, the pair has not revealed much about their first encounter and how they first met, but as per SportsLine, they dated for a long time before marriage.

The KKR player proposed to Amy while they were in India. After staying engaged for two years, they finally decided to get married on April 7, 2018. Together, they have a beautiful daughter named Esther Kate Finch, born on September 7, 2021.

On September 8, 2021, Aaron revealed to the world that he had a new addition to his family. He posted the two pictures of the baby and his lovely wife and captioned the photos, “Welcome to the world Esther Kate Finch. Our little princess arrived yesterday at 4.58 pm weighing 3.54kg.”

The first image was their baby wrapped in a floral blanket with a matching headscarf, and the second image displayed how happy they were to become a parent.

He also expressed gratitude towards his wife, Amy, for doing a fantastic job and keeping the baby healthy.

On July 21, 2022, Amy shared that her beloved family home had been sold and is excited about her upcoming chapter in life.

Amy slammed threats of violence and sexual assault. She called out trolls threatening her with sexual assault after her husband failed to make any runs during the T20 tour in New Zealand.

A fan made a terrible comment on one of her posts aimed at her husband, Aaron. The comment was, “Tell your husband to step up his captaincy bloody loser [expletive] because of him I lost all my money.”

Amy could not stay quiet after the disgusting comment was made to her husband, and she responded with a lengthy message saying, “Part of me doesn’t want to give this individual the satisfaction of a response.”

She further explained how she and her husband do not appreciate it and said that these keyboard warriors “need to go and get a bloody life.”

Since the threats turned physical, Amy felt compelled to speak up. She said, “I have a pretty thick skin and can generally ignore them but recently there have been direct threats of violence and sexual assault.”

She also pointed out the threats were not only towards her but also her husband and family members. She ended the lengthy post with, “A touch of kindness can go a long way.”

5 Casino Games on PS5 to Try