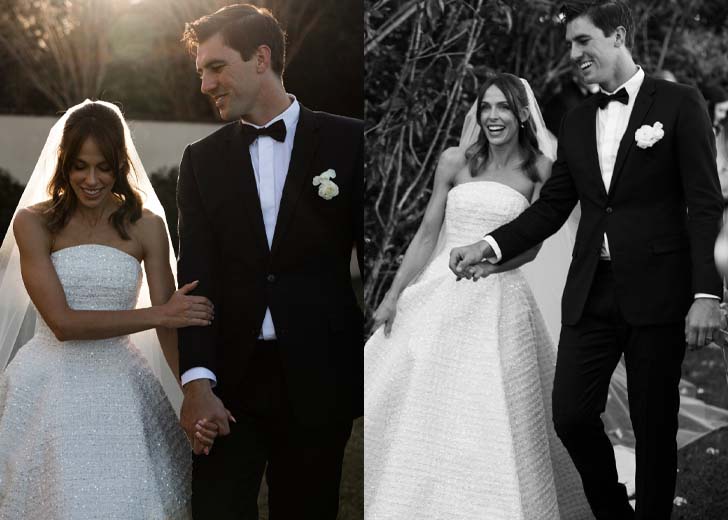 Pat Cummins looked stunning in his wedding suit that cost around $4,900.

Boston and Cummins first met in 2013 in Sydney’s entertainment district. According to The Sports Rush, the cricketer’s wife is an interior designer and currently owns an online store that offers opulent home decor.

They got engaged in February 2020 after dating for many years, but their wedding was postponed due to the pandemic.

Cummins and Boston married in front of family and friends, including the cricket star‘s several teammates and coaches, at the luxury accommodation Chateau Du Soleil on the coast of Byron Bay.

The couple has now released the first official photograph from their wedding.

In the photo, Boston looked stunning in her A-line dress, which had embroidered and quilted fabric. Her long hair was out and over her shoulders, finishing off her classic look, and she was wearing a long white veil. Likewise, her dress was designed by Steven Khalil.

On the other hand, Cummins looks sharp in a Dior suit — comparable suits from the brand typically cost around $4,900.

The couple had an outdoor garden ceremony on the grounds of the Chateau Du Soleil, and a clear marquee was set up for the reception. Likewise, their reception was held by the pool at the property, which costs up to $7,000 per night and began with a champagne tower.

Boston also created lavish floral displays for the reception to help set the tone for the glamorous occasion.

Cummins posted wedding photos on Instagram with the caption just married. He captioned his post, adding a white love heart emoji. Boston also posted the same picture on her social media pages and their wedding date.

In one photo, they can be seen walking into their reception under fairy lights, with a bar and a lavish three-tier cake beside them. Moreover, fans could get a behind-the-scenes look at the wedding through guest photos.

Before they got married, Cummins and Boston welcomed their first child together, a baby boy, on October 8, 2021. The cricketer and his wife announced the birth of their son, Albie, on their respective Instagram pages.

Cummins wrote in the caption, “Boston and I welcomed our gorgeous boy Albie into the world on Friday.” He also added, “‘We couldn’t be more besotted.”

Likewise, Boston also shared a similar message and wrote: ‘We love you so much, my darling boy.”

Following the posts, many of their fans congratulated the new parents. One of the users wrote, “The parents Yess! Much love to you and Albie.” Likewise, another person commented, “Heart touching moment. Congratulations to both may little bundle of joy fill your life with lots of love and happiness.”

In addition, the couple included a touching video that depicted their journey to becoming first-time parents. The video begins with Boston informing a delighted Cummins that she is pregnant and follows her as she grows her baby bump, undergoes scans, and eventually arrives at the hospital to give birth.

They are living happily with their son and dogs as of 2022.