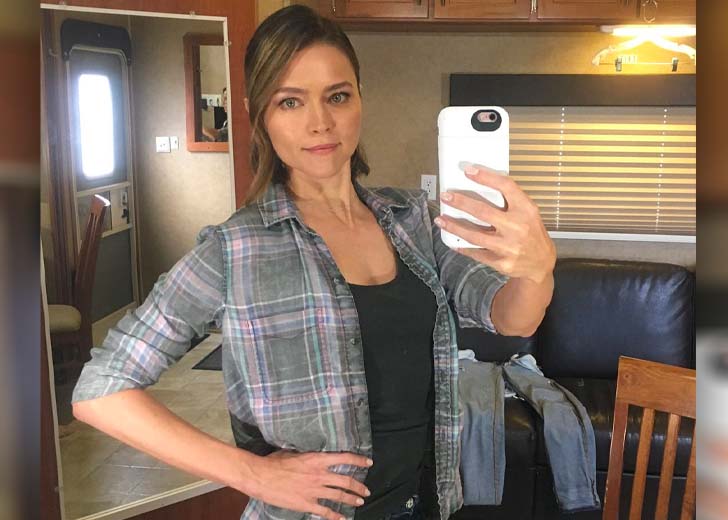 Trieste Kelly Dunn, an American actress, has long been the subject of speculation on her love life due to her extreme secrecy.

While there is no official news regarding her relationship with anyone, the actress in the past hinted that she was in a couple of relationships.

Is Trieste Kelly Dunn dating someone?

It is unknown if The New Year actress is dating anyone, but the actress is yet to be married. Nevertheless, Dunn clarified that she was romantically linked with a few guys in the past.

In August 2017, the actress tweeted that she had a hot boyfriend who played magic cards.

Similarly, after a year, in December 2018, Dunn shared a tweet hinting that she has a boyfriend who produced an indie film.

The native of Utah expressed that she was proud of her boyfriend, who made a movie on the 44th president of the United States, Barack Obama.

She said, “So proud! My boyfriend produced a film on @BarackObama best of 2018 list! I watched him work on getting @SupporttheGirls made for years. Producing an indie film is a roller coaster and thankless work but he pulls it off.”

So proud! My boyfriend produced a film on @BarackObama best of 2018 list! I watched him work on getting @SupporttheGirls made for years. Producing an indie film is a roller coaster and thankless work but he pulls it off 💕 https://t.co/67EzNbioU6

However, she did not reveal any information regarding the guy’s identity to her fans.

Furthermore, due to her secrecy regarding her personal life, Dunn has been the target of several lesbian claims.

In 2016, a fan tweeted a question regarding Dunn’s sexual orientation. The fan asked, “@TriesteKDunn you are lesbain? Talk about getting hit in ones #Blindspot.” Moreover, she is also a supporter of LGBTQ and has shown her support for the LGBTQ community in the past.

Dunn was born on January 14, 1981, in Provo, Utah, U.S.A. She studied theatre at the North Carolina School of the Arts, where she appeared in several student films, including those made by classmates and future collaborators.

She was praised as a “break out star” by the Los Angeles Times based on her performances in the independent films Cold Weather and The New Year in 2010, and Filmmaker Magazine named her one of the 25 New Faces of Independent in their Summer Issue.

The actress first gained notoriety as Molly McConnell playing alongside Julianna Margulies in the FOX television series Canterbury’s Law. She made critically acclaimed appearances in Vacation!, United 93 and Mysterious Skin in her early film performances.

In 2014, she co-starred as Dep. Siobhan Kelly in Banshee while also playing FBI Agent Elizabeth Ferrell on the TV show Believe.

On the NBC show Blindspot, Dunn started playing a recurring role as U.S. Marshal Allison Knight in late 2015. The same year she starred in the single season of Almost There.