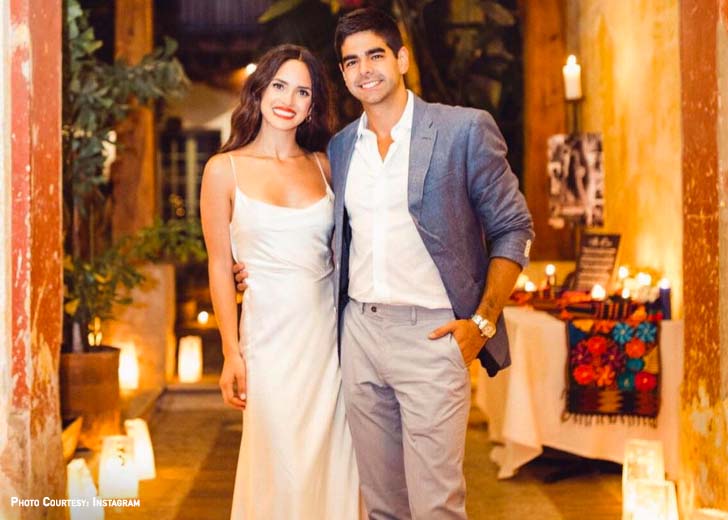 Adria Arjona is the daughter of a famous Latin-American singer.

She has also appeared in movies like Pacific Rim: Uprising, Life of the Part, Triple Frontier, 6 Underground, and Morbius as a supporting actress.

The beautiful actress has won the hearts of many fans worldwide, often curious whether the actress is single, dating, or married. Well, the answer is: Arjona is not single but married.

Yes, the 30-years-old actress married the man of her dreams, and here are the details.

Adria Arjona got married in 2019, one year after engagement

In the summer of 2019, the actress married attorney Edgardo Canales. The pair got married in Antigua, Guatemala, in September of 2019. They had a private wedding with their close ones present.

They got engaged a year prior to their wedding. After her engagement, the actress posted a beautiful picture showing her engagement ring in August 2018 with a sweet caption: “A million times yes!”

Knowing the person that she is, Arjona keeps her life lowkey hidden from the media. She likes to separate her personal and professional life. Before their engagement and marriage, she hardly posted details about the man she was connected with on her Instagram account.

Because of his profession, her spouse is less visible to the general public. However, he has been seen with her at several red carpet events, and the duo was pictured together at the 2020 Vanity Fair Oscar Party.

According to Quién, Canales and Arjona chose not to ask wedding guests for presents when they married. Instead, Arjona and her new husband asked that attendees buy books or gifts for underprivileged youngsters.

The Good Omens actress shared two stories in which she reports two things: that the party lasted until after 6:30 a.m. and that she had the support of the women closest to her life at all times during the ceremony and the party: family and friends, as per the source.

Adrina Arjona is the daughter of a famous Latin singer

Adria is the eldest sibling among the couple’s other children. Later, her parents, Ricardo and Torres’ divorced in 2009. However, the father and daughter relationship is close and supportive, as per Heavy.

Adria remarked about her father on her profile, “My dad has given me the biggest gift anyone has ever given me. He gave me wings so I could soar.”

In a separate interview with People Chica, she stated that her father was her “number one admirer.”

In an interview with Flaunt, she revealed that she used to wait tables despite having a renowned father. Arjona worked as a waiter while studying at the Lee Strasberg Theatre & Film Institute in New York City when she was only an aspiring actor.

How Can A Lawyer Help You If You've Been Badly Injured?