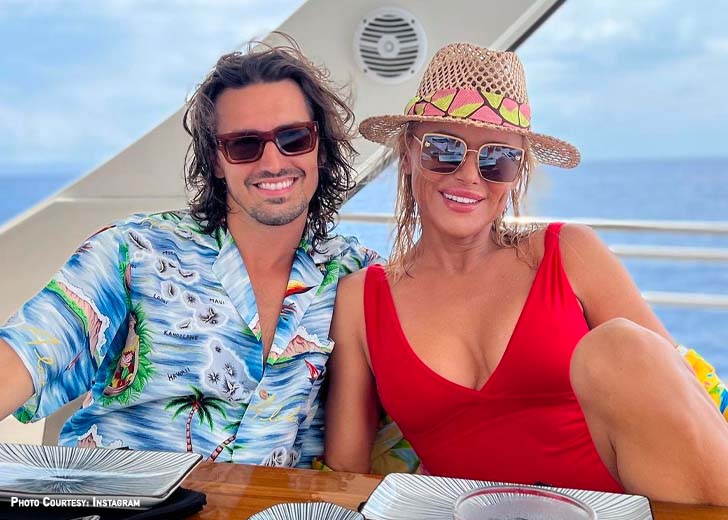 All about Diana Jenkins’ dating history.

Sanela Diana Jenkins, known as Diana Jenkins, is making headlines for joining the cast of The Real Housewives of Beverly Hills (RHOBH) for Season 12.

She is a philanthropist and entrepreneur born and raised in Bosnia and Herzegovina. She currently resides in California.

After she joined RHOBH, people were interested in her love life. As the audience wanted, Diana shared about her life on the show.

Diana Jenkins had one husband, Robert Jenkins, and is now engaged to her current partner, Asher Monroe. (Source: Instagram)

Here is everything Diana shared about who she is dating now, her former husband, and her children.

Who is Diana Jenkins dating now?

Diana announced her engagement to musician and actor Asher Monroe early on in RHOBH. Diana began dating Monroe, whom she first met in March 2010 at Victoria’s Secret event.

They started dating shortly after her divorce from banker Roger Jenkins in 2012. Despite their 15-year age difference, Diana has described her relationship with the 33-year-old singer/songwriter as intense.

The couple has one kid together. They welcomed Eliyanah, their first daughter, together in 2020.

Monroe and Diana recently shared the news of a miscarriage in one episode as they attempt to expand their family. Monroe’s career is vaguely described in the show.

His Christmas carol performances at Diana’s holiday party in the July 27 episode reminded him that he’s a talented musician. As it turns out, Monroe has a strong background in acting and music.

Monroe has appeared in several films. Perhaps most notably, he played Marco, a total teen heartthrob, in the 2009 reboot of Fame.

Following that, he appeared in the films Parenthood and Medium, as well as on TV shows such as Dora the Explorer and Zoey 101. As a result, he dominated the early 2000s.

Asher has collaborated with well-known artists such as Sean Kingston and Chris Brown. According to Our Culture Magazine, he released an album called ‘Talk with God’ in 2021 and worked on another called ‘Windows of Time.’

Diana was previously married to her first husband, Jenkins. He established himself as the highest-paid and most skilled banker in the United Kingdom.

Diana didn’t have a penny to her name when she met her husband. She was a refugee who worked odd jobs in London to improve her English.

Nonetheless, according to Vulture, she wooed the wealthy banker after a chance meeting at the gym. They married in 1999 but divorced in 2009.

For most of their marriage, Scottish-born Roger was the highest-paid banker in London, reportedly earning up to $30 million per year.

That may sound like the makings of a contentious divorce, but when Roger and Diana decided to part ways, they did so amicably.

According to the Daily Mail, Roger eventually gave Diana roughly half his more than $300 million fortune, making her one of the wealthiest people in England.

He gushed about how much he loved his former wife and had respect for her “as a mother, businesswoman, and brilliant wife.” He said, “We have moved on and are supremely happy with the arrangements we have in our lives. Diana will always be a very happy part of my life.”

Diana and Roger agreed to split most of their assets, including a sprawling Malibu estate and a Bosnian vacation home, in addition to the money. Diana said, “He is and always will be my best friend. He is the father of my children, and I will always love him.”