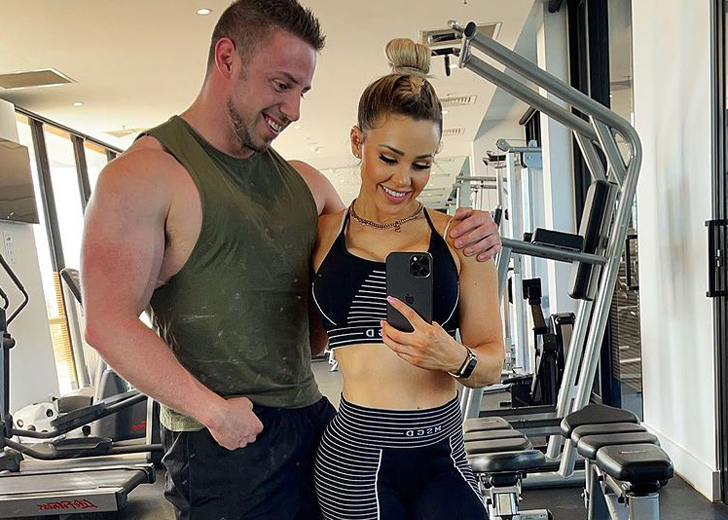 Stephanie Sanzo is an Australian personal trainer and fitness celebrity. Her fitness journey has influenced several people to make themselves fit and healthy.

For her positive influence on the public, she has already been featured as a cover model for different Australia’s fitness and health magazines.

Not only is Sanzo an energetic certified trainer, but she is also an amazing wife who has a strong bond with her husband, Jamie Bisset. The husband-wife duo is the parent of two children: a son and a daughter.

Bisset Has Immense Love and Respect For Sanzo

Sanzo and her husband Bisset have been together ever since they took the wedding vows on February 5, 2016. Since then, the duo has always been together.

In their long marital journey, they have been blessed with two kids, which has further strengthened their relationship. Although the couple rarely discloses details about their marital and parental life on social media, the two seem happy without any public interference.

Bisset’s love for his wife was also seen on their fifth wedding anniversary in 2021. On that day, he took to Instagram handle to share a picture alongside his wife and embrace it with a lovely caption.

In the picture, the couple was smiling as they took a mirror-selfie in the gym. “Today marks 5 Years with @stephaniesanzo,” Bisset wrote as the first sentence of the caption, which was followed by a heart emoji.

In the following line, he stated that he has so much love and respect for his wife. He continued, stating that even after all these years, Sanzo still takes his breath away every time he sees her.

His exact words were, “⁣Some people say that ‘your attraction dies down once you’ve been with someone for a while’…but that couldn’t be further from the truth for me because she still takes my breath away every time I see her.”

Well, going by that, it is vividly clear that Sanzo and Bisset have great love and respect for each other that they had during the initial phase of their love life. This also proves that the two’s relationship gets more robust as time passes.

What Does Sanzo’s Husband Do? His Career

Much like his wife, Bisset is also heavily involved in fitness. He is a trainer, marketer, and coach.

He is usually seen sharing clips from his training and giving fitness tips through his social media handle, mainly Instagram. Through his Instagram handle, he has also provided instructions on how to do deadlift plus guidelines/charts for different fitness programs.

Due to his helpful tips, he has garnered over 60 thousand Instagram followers.

He is also the founder of Social Media Fit Pro, a program that helps personal trainers to earn additional $5-10 thousand per month through social media.

The Social Media Fit Pro’s official website claims that not only can they increase the earnings, but they can also help the trainers to increase their social media activity (followers and engagement) through various branding strategies.

Considering Bisset’s line of work, it can be assumed that he has managed to earn a reasonable sum and has a healthy net worth. However, his salary and net worth figures are yet to be disclosed.