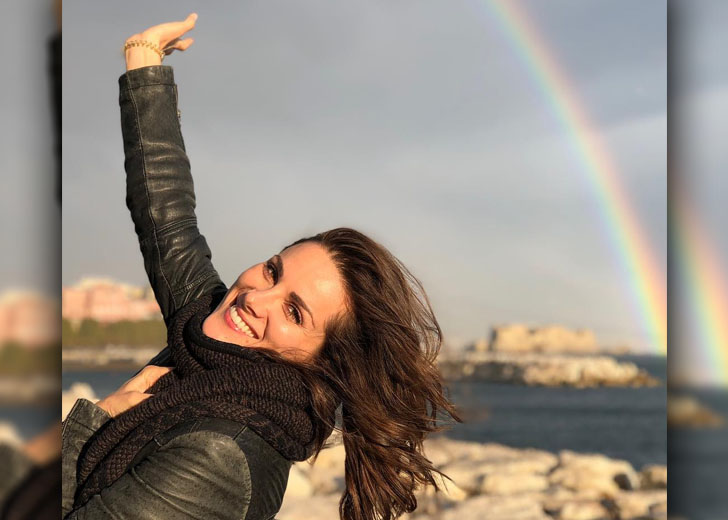 Everything about Stefania Spampinato’s personal life!

Stefania Spampinato is a talented Italian actress who has already made a mark in the entertainment industry. Her works include Promo Life, Anonymous, Off the Grid, 4Got10, The Gods, Ford v Ferrari, Spies in Disguise, and Darkness Falls.

Despite all those works, she gained the utmost fame for her performance in the ABC medical drama Grey’s Anatomy and its spin-off show titled Station 19. In those two shows, she portrayed the role of Dr. Carina DeLuca.

Speaking more of her character in the show, she first appeared in the fourteenth season of Grey’s Anatomy. Since then, she has been a part of the show. Later, she was introduced as a recurring character on season three of Station 19 – became a series regular in season four.

Upon Spampinato’s arrival in Station 19, viewers saw her character of DeLuca meet Maya Bishop – played by actress Danielle Savre. As the story went on, they fell in love and eventually got married to each other, right in the finale of Season 4.

As Spampinato played a lesbian character in the show, fans were eager to learn about her real-life sexuality. Additionally, another fan query is whether the actress is married to a husband or not in real life.

As of this writing, there have been no reports that suggest that the Catania, Sicily-born actress is gay or lesbian.

Spampinato also hasn’t given any clue on her sexuality, not being straight. So far, there is no definitive source or evidence that suggests otherwise. Thus, Spampinato is not gay/lesbian, and she only played the role of a lesbian character on-screen.

Does Stefania Spampinato have a husband?

Spampinato’s character of Dr. Carina DeLuca has a blissful marital life. However, that doesn’t seem to be the case for the person that plays the character.

Till now, there has been no news of the actress sharing the wedding vows with a partner. The 39-year-old actress is very private when it comes to her personal life and rarely shares anything related to it.

Speaking of her pictures with co-stars, she has shared photos on Instagram with some fellow actors such as Alessandro Siani, Giacomo Gianniotti, and Jon Bernthal. And though those pictures look amazing, none of it hints that she might be married to either of them or even dating.

Stefania Spampinato with Giacomo Gianniotti at an event (Photo: Instagram)

To conclude, her personal life remains a mystery to many. And until something evident comes up, it’s fair to mention that she is not married to a husband and her current relationship seems to be single.

Stefania Spampinato wants to fall in love at first sight

Although Spampinato’s present relationship status is unknown, some of her close followers have an idea of what kind of partner she is looking for.

On May 20, 2021, the actress joined her on-screen partner Danielle Savre for an Instagram Live Session on Station 19’s Instagram handle. During their conversation, the two co-stars talked about several things.

While answering a question related to a potential date, Spampinato mentioned that she wants her date to cook for her, and she would love it. And that she would have to feel pretty strongly to go out on a date with them.

As she went on, she admitted that one of her biggest dreams, in terms of romance, is to fall in love at first sight.

Spampinato opened up about those things in early 2021, and now it’s almost mid-2020. So, has her dream been fulfilled? Sadly, that question couldn’t be answered for now as her personal life remains behind the curtains.