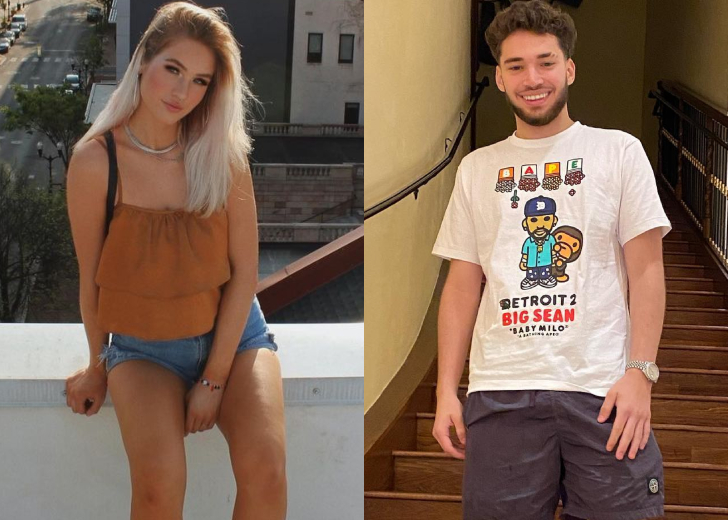 Sky Bri is an influencer and OnlyFans star who has a massive fanbase. In the past couple of years, Bri has gained an enormous fanbase who are curious about her life.

They are mostly curious about her dating life, especially her rumored boyfriend, Adin Ross. Ross is a Youtube and Twitch Streamer best known for streaming GTA V and NBA 2K.

Ross invites people to stream together, and Bri has often appeared in them. In October 2022, Bri and Ross answered some of the questions asked by their audience, which led people to believe that the pair were dating.

In October 2022, Bri and Ross answered some explicit questions, which led many to believe that Ross was Bri’s boyfriend. Later, in the same stream, the steamer asked Bri to be his girlfriend, to which the latter said, “Yes, I would love to be.”

Bri then asked Ross if she could kiss him. Initially, Ross denied saying he had made a vow not to kiss anyone on stream if their relationship was not official.

The OnlyFans model made a joke about getting intimate with Ross. The latter hesitated but continued the conversation about what would happen if they did so.

Their relationship became a topic of discussion, but the couple never clarified it. Moreover, before the stream, Bri even got Ross’ name tattooed on her hand.

Ross was stunned after he came to know about it. He asked his fans while streaming what the gesture meant.

During that time, a few asked if he was Bri’s boyfriend, to which Ross said, “We’re not in a relationship.” He added, “Does it mean that I own (her)? What does it mean chat? What kind of [expletive] is that?”

He noted that the OnlyFans model was the first to have his name “tattooed” on them before concluding. Additionally, he expressed his disbelief at the bold action she took.

Bri’s previous boyfriend and dating history are unknown. However, once, she was rumored to be dating Jake Paul.

Paul and Bri were photographed kissing after Paul broke up with his then-girlfriend, Julia Rose. However, it is unknown if the pair dated afterward.

Ross was previously linked with Corinna Kopf, and the couple gained notoriety for their “hot tub kiss.” Since then, people have conjectured that the two were dating, but Ross clarified the misunderstanding.

In April 2021 on Instagram, the streamer made his relationship with his new partner, Pamibaby, known. He uploaded a now-deleted picture of the pair and wrote, “Sprung. @pamibaby” as the caption for the image.

Ross also had planned on marrying Pamibaby. He revealed in July 2021, on Impaulsive, that he had planned his future with her.

Unfortunately, their relationship did not last long. Neither Ross nor Pamibaby has given a reason for their breakup, but soon after the split, Ross started e-dating, and that was when Bri entered the picture.