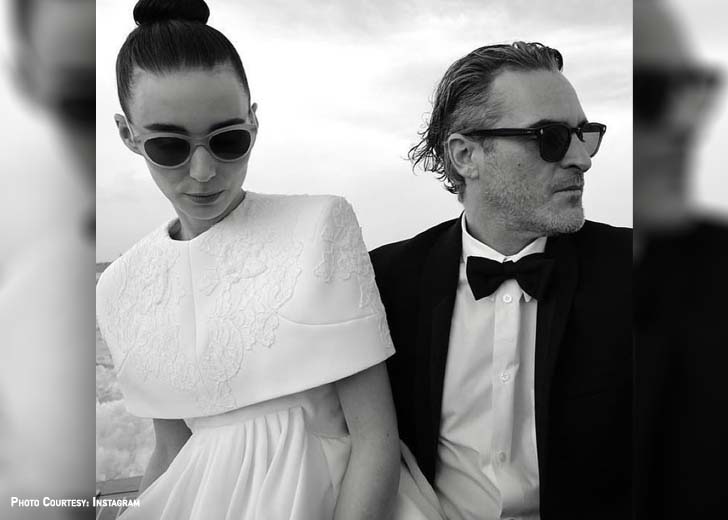 Joaquin Phoenix referred to Mara as his wife but did not reveal when or where their wedding took place.

American actress Rooney Mara, who will be seen in the upcoming film Women Talking, has been in a long-term relationship with actor Joaquin Phoenix.

Mara and Phoenix met while working on Spike Jonze’s film Her in mid-2012. Since then, Phoenix has had a low-key relationship with Mara, who is 11 years junior to him.

In Vanity Fair, Phoenix mentioned meeting Mara, saying, “I’ve only ever looked her up on the internet.”

He also added, “We were just email friends. That’s something I’d never done before. I’ve never looked up a girl online.”

During the filming of the movie Her, the actor also thought Mara despised him but later discovered she was just shy and liked him.

The couple was also seen together in the movie Mary Magdalene. According to W magazine, before shooting the biblical film, Mara and Phoenix were just friends, and they started dating shortly after the film wrapped.

In May 2017, Phoenix and Mara revealed their relationship to the world at the Cannes Film Festival. They not only sit next to each other, but they also hold hands. Similarly, they publicly celebrated when Phoenix won Best Actor for You Were Never Really Here.

Moreover, Phoenix confirmed to The New York Times that he and Mara live together. In 2018, the couple was seen together at a screening of Amazon Studios’ You Were Never Really Here, where she was seen supporting Phoenix.

Phoenix and Mara are passionate activists who joined a protest on National Animal Rights Day in 2019. The couple marched in West Hollywood during the demonstration while holding dead animals. Phoenix was named PETA’s Person of the Year for his animal rights activism at the end of 2019.

Mara and Phoenix are not married, as previously stated, but in a recent interview, Phoenix referred to Mara as his wife but did not reveal when or where their wedding took place.

Rooney Mara and Joaquin Phoenix have one son

The pair welcomed their first child together in September 2020, named River. According to People, the name was chosen to honor Joaquin’s late brother, River Phoenix, who died in 1993 due to a drug overdose.

Moreover, The child’s name was revealed by Russian filmmaker Victor Kossakovsky at the 2020 Zurich Film Festival.

During an interview with The Sunday Times, Phoenix stated, “I am a vegan, but I am not going to force my beliefs on my child.”

The actor adds that allowing his child to make his own decision about meat also means that it is his responsibility as a parent not to sugarcoat things and to provide River with all the hard facts about where his food comes from.

Mara opened up about her motherhood experience in a letter for Farm Sanctuary’s Mother’s Day campaign. She wrote, “Raising our baby, River, has opened my heart to a whole new life of hope and determination to make the world a kinder and more sustainable place.”

She added, “I feel incredibly blessed to be able to raise my son in all the ways that nature intended, and I wish that all mothers in the animal kingdom could share in that sacred bond with their young, unhindered by human exploitation.”