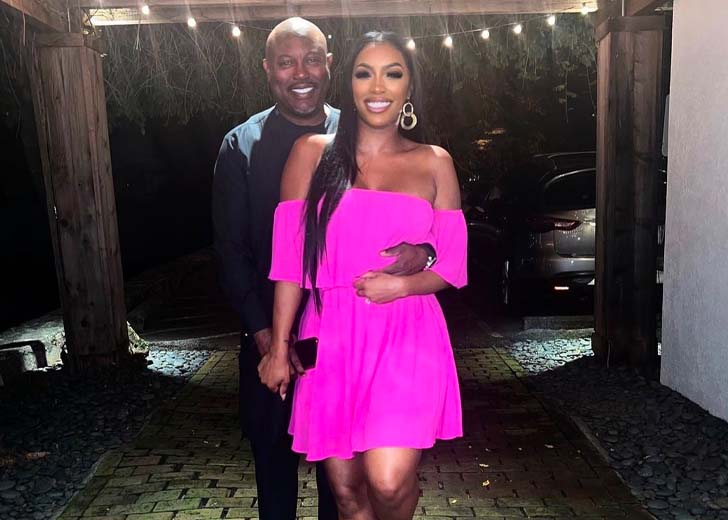 Porsha Williams and her fiance Simon Guobadia are planning to have 3 different weddings.

Porsha Williams is a TV personality, actress, and author from the United States. She is best known for being a part of The Real Housewives of Atlanta from 2012 until 2021.

She left the popular reality show to star in her spin-off series, Porsha’s Family Matters, which is currently in its first season.

Moreover, Williams is now engaged, and her fiance might be familiar to fans of The Real Housewives of Atlanta. Here’s why.!

Porsha Williams is engaged to her co-star’s ex

Williams caught colossal media attention when she revealed that she was dating her co-star’s ex-partner.

Yes, in an Instagram post, the reality star confirmed her relationship with Simon Guobadia, who is Williams’ RHOA co-star Falynn Guobadia’s ex.

“Our relationship began a month ago—yes we are crazy in love,” she wrote a caption in a selfie with Simon.

“I know it’s fast but we are living life each day to its fullest. I choose happiness every morning and every night. Tuning out all negative energy and only focused on positive wishes. He makes me so happy and to me, that is what matters most,” she added.

While she did not announce her engagement, her fiance, Guobadia, later confirmed the couple was engaged after only a month of dating, back in May 2021.

“I asked her to marry me because we checked EVERY box, and then some,” the entrepreneur wrote on his Instagram.

Flynn, Simon’s ex-wife, announced their separation after two years of marriage and filed for divorce, only around a month before Williams and Simon started dating.

That’s when fans started accusing Williams of being the reason for their separation.

Williams responded to the acquisition by stating, “I had nothing to do with their divorce filing. That’s between the two of them.”

She added, “Falynn and I are not friends, and Simon’s divorce has been settled. Our relationship is a positive, loving step forward in everybody’s lives.”

Williams and her fiancé, Guobadia, have been busier now that they are planning their upcoming wedding. The Real Housewives of Atlanta couple previously revealed to Bravo that they were planning to “go big” on their big day.

The writer revealed her bridal party ahead of her wedding to Guobadia, posting on Instagram to show the ladies who will be her bridesmaids and stand by her side on her way to the altar.

“Sunday Brunch was served,” the reality star captioned her April 25 post, which included a video of the stunning bride-to-be and her stunning bridesmaids, including RHOA’s Shamea Morton and her sister, Lauren Williams.

They have always been transparent about their relationship and future wedding plans. Wiliams revealed in an exclusive interview with Bravo Insider members that wedding plans are in the works, and the couple is trying to plan three different celebrations around the world.

“So much to plan,” Williams said in the Bravo Insider video. “So far, I’m just trying to settle on a date.”

In a video posted on Bravo’s Instagram, the bride-to-be also discussed her upcoming wedding. “I am marrying an amazing Nigerian man, honey. It is not going to be intimate,” she said in the video.

“It is going to be huge, probably. It’s gonna be big, but I want it to have an intimate feel.”

And, as the groom-to-be revealed in an Instagram post on December 27, Guobadia is on board with dream weddings. “I’m here to promise, she will get her three weddings,” he wrote in the caption of his Instagram post.