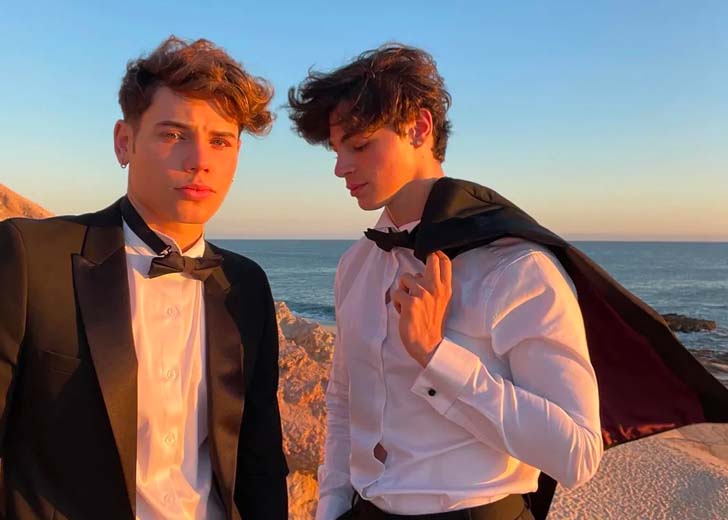 A complete look at Pierre Boo and Nicky Champa’s relationship!

Pierre Amaury Crespeau, aka Pierre Boo, is a renowned social media personality who gained fame through his TikTok videos. Along with him, Nick Champa [aka Nicky Champa] also rose to fame for the same reasons.

Pierre Boo and Nicky Champa are TikTok’s “It” gay couple who attained the limelight simultaneously, mainly thanks to their love. The duo would share pictures of them, prank videos, and more content, which started getting viral, increasing their followers count.

As their presence on social media increased, they also ventured on TikTok and YouTube and started realizing that they could be the type of couple who could reflect on “what our future could look like.”

Nicky told Forbes in April 2021, “What excites us the most is when people see us simply as a couple, not necessarily a ‘gay couple.’ Living your truth and being your authentic self is one of the most valuable and respected assets you can have right now.”

And though their popularity might sometimes make people worry about a possible breakup, the two made sure that didn’t happen. Pierre and Nicky told the outlet that they prioritize themselves and always take time for themselves and their relationship.

Pierre Boo and Nicky Champa met at a movie audition

Before they became famous together on the internet, Pierre and Nicky were aspiring actors trying to make a living in Los Angeles. On a certain day in 2017, they were in Hollywood for a movie audition, where their paths crossed for the first time.

The details were later shared during the couple’s multiple interviews with different media outlets. In April 2021, they recalled their first meeting during an exclusive interview with J-14. Nicky said that when he first saw Pierre, he knew Pierre was the one.

“I just was drawn to him. He was just so beautiful, and he had this presence to him that was just illuminating. I just saw stars,” he added. On the other hand, Pierre said, “I don’t know how he saw that,” and then added that he was late, stressed, and trying to focus on his audition.

Nicky then continued that he had taken a picture of his future boyfriend so they could meet again. He said, “I have how I saw him for the first time forever … I have it in a physical form.”

In another interview with NBC News in February 2022, Pierre revealed that when he met Nicky, he had just gotten off a relationship. He said, “I was coming out of a tough breakup, and after one, two, three, four … heartbreaks, I lost the dream of a fairy-tale relationship.”

Shortly after they met, they went on a date despite being scared and Pierre’s recent heartbreak. And the rest became history as they realized they had a lot in common. One month later, the couple had moved in together.

“When we met and kind of realized we had the same drive and passion, we were just like, ‘Let’s do this together,’” Champa told NBC News.

Pierre Boo and Nicky Champa’s rise to fame and now

Eventually, their content began to grab people’s attention, mainly teens and moms. And when TikTok started gaining hype, the duo joined the platform in June 2019 and took full advantage of it by posting different types of content.

And their move to TikTok changed their lives. In the same interview with NBC News, Pierre said, “We got into it without knowing where it was going. When it really started to build some sort of career, we were like, ‘Did our relationship just become our career?’”

Likewise, while talking to Flaunt Magazine in May 2022, Pierre said, “We both moved to Los Angeles in the pursuit of acting, but with the rise of social media, we pivoted to TikTok as a way to help us get closer to our goals.”

“We went from renting a studio apartment to owning a house in Calabasas in a matter of a year,” Nicky added. The platform TikTok provided helped the couple gain many rewards, including fame, money, and campaign deals with Spotify and Asos.

Slowly, Pierre and Nicky expanded into YouTube as well and launched their joined YouTube channel. On their channel, the two started giving glimpses of their personal lives and more such as short clips and travel vlogs.

To conclude, the duo’s relationship has evolved over the years, and it only seems to improve with each day. Their bond seems intact, and it’s only fair to say that their fans will see more of them in the future.

As for if Pierre and Nicky are married or not, the answer is no — at least for now. Currently, there have been no reports of them getting engaged or married. Similarly, it remains unknown whether they have made plans to settle down.

Not only their relationship but their social media presence has also continued to grow. Pierre has gained over 1 million followers on Instagram, whereas Nicky has over 900,000 followers. Similarly, they have over 1.15 million subscribers on their YouTube channel and a combined 24.6 million followers on TikTok.

Pierre and Nicky’s online following has been built around their relationship, and their fans always see the couple’s happy and picture-perfect relationship. However, their sweet togetherness on social media has also drawn some criticisms.

And one of the critics is RuPaul’s Drag Race alumnus Bob the Drag Queen. In late September 2021, Bob posted a TikTok video in which he initially added one of Pierre and Nicky’s videos, and in the latter part of his video, he said;

“I have to block these two. They’re not doing anything wrong, but I have to block them.” Pierre and Nicky responded to the criticisms by uploading a YouTube video on December 19, 2021, titled, ‘We are not perfect.’

In the video, Pierre revealed that the drag star’s remarks and the commentators calling out Pierre and Nicky for projecting perfection made him depressed. Additionally, he stated that he does have occasional arguments with his partner and there is even yelling.

However, by the end of the day, they would have resolved those problems and had happy moments. Later, while talking to NBC News, Nicky mentioned that he and his boyfriend would not stop “pumping out happy content” anytime soon.

He told the outlet, “That’s genuinely what we are most of the time and what we like to put out there. Also, we never felt like we had a good representation of a happy, healthy queer couple.”

“When I was growing up, it constantly was stories being told of suffering and pain — that we had to go through this negative journey through life. I was like, ‘I’m sick of that. That’s not helpful for me. I don’t want to put that out there. I want to portray happiness.’”

Pierre then joined in the conversation and said that he has now started believing in the possibility of a “fairy-tale relationship” since he met Nicky. In the end, he hoped that his and Nicky’s positive content would inspire their fans to believe in what he believed.

But despite them being positive all the time, it gets tough sometimes, especially when your fanbase is built around your relationship. “Followers want to see you all the time, which can get difficult,” Pierre told Flaunt Magazine.

The couple is always together at every major Hollywood party or some event. And even though that’s what their fans want, it can get tiresome at some point. “One of the toughest aspects of being a public couple is the constant comparison to each other and at times an inability to be seen as individuals.”

At the end of the conversation with Flaunt Magazine, Nicky added that there is “more to us than us.” Pierre then said while they are serious on several occasions, they have also bickered at some point.