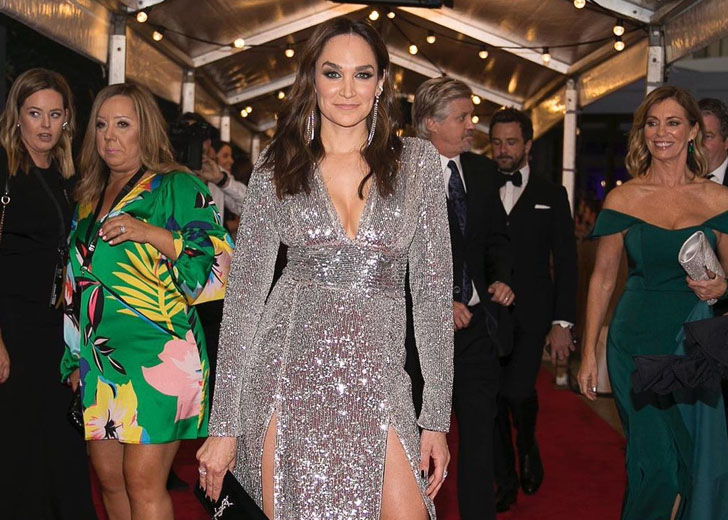 Australian actress Nicole da Silva is best known for her performances in movies and TV shows such as All Saints, Dangerous, Carla Cametti PD, Rush, The Tangle, Wentworth, and Doctor Doctor.

In addition to her relatively flourishing career, she also relishes a blissful personal life. The actress has been in a long-time marital relationship with her partner named John. Furthermore, they are parents to a child and a rescue dog.

Nicole da Silva and John welcomed a baby in 2018

The Sydney native first revealed her pregnancy during her interview with Stellar Magazine on April 8, 2018.

At the time, she mentioned that she was six months pregnant. Talking more about her pregnancy, she said, “I feel like myself again. You spend so long at the beginning of the pregnancy mentally coming to terms with it and physically you’ve got stuff going on, too – but you’re not showing.”

“Then in the second half, it’s like, ‘This is a reality now, it’s not just all in my head, I’m actually out there, literally, and I’m going to become a mother. It’s quite lovely.’”

Before the interview, Silva had kept every detail of her upcoming baby upto herself and her close-knit family, including her partner John.

On the same day the interview was published, she took to her Instagram handle to finally share the news among her well-wishers. She posted a couple of pictures from the photoshoot with Steller Magazine, in which she was flaunting her baby bump.

In the caption, she wrote, “I’ve been hard at work on my latest production [her baby].” She then stated that her followers can read more about her pregnancy in Steller Magazine.

Later, in the same month, April 23, 2018, she opened up about her pregnancy and the future in an exclusive interview with TV Week’s Now To Love outlet.

Firstly, she said that she kept her pregnancy news private as it was a private affair. “It is [pregnancy], for the most part, a private affair. But it does get to a point where you’re pretty obviously pregnant [growing baby bump].”

She continued, “It’s just about embracing the fact that people do have an interest in that story [of her pregnancy]. It’s part of who I am now – this is the way it is.”

As she went on, she described her pregnancy as “a mixed bag” — she had suffered “exhaustion and afternoon sickness” all over her first trimester. “But I feel a lot like myself now,” Nicole added with a smile.

On September 20, 2018, Silva revealed that she recently welcomed her baby — and it’s a daughter. She posted a picture of her baby girl’s hands on her hand and captioned it saying, “Baby da Silva says Hi to all the well wishers.”

Since then, the actress and her partner have been relishing the days as the parents of two — they also have a rescue dog named Chula whom they regard as their child.

Silva has occasionally featured her child on her social media handles but prefers to maintain privacy. She is yet to reveal the face – uses stickers on her child’s face while sharing pictures – and the name of her daughter.

The 40-year-old actress is very private about her romantic life. Due to that, she hasn’t revealed much about her relationship with the father of her baby girl.

Additionally, she is yet to feature her boyfriend on her social media handles or talk about him in her interviews. The only time she ever mentioned John in her interview was during her pregnancy announcement.

While talking to Steller Magazine, she mentioned her partner John and said that with a baby on the way plus a rescue dog, their “marriage can wait.”

So, it’s evident that by April 2018, Silva and John were yet to share the wedding vows. However, now that years have passed since that day, have they gotten married?

The answer to that question remains unknown. As mentioned earlier, she has remained mum about her love life. It’s quite possible that the couple got married, but it’s also possible that they aren’t.

Nicole da Silva was rumored to be gay/lesbian

Long before her relationship with John began, Silva was rumored to be gay/lesbian.

The speculations began after the actress portrayed the role of Franky Doyle, a lesbian character, in the crime-thriller television show titled Wentworth. Another reason behind the rumors was Silva’s private personal life.

Although the actress didn’t address the issue at that time, the rumors eventually faded out once she began dating her current partner and welcomed a daughter with him.